What Do Brook Trout Eat? (Favorite Prey and Baits) 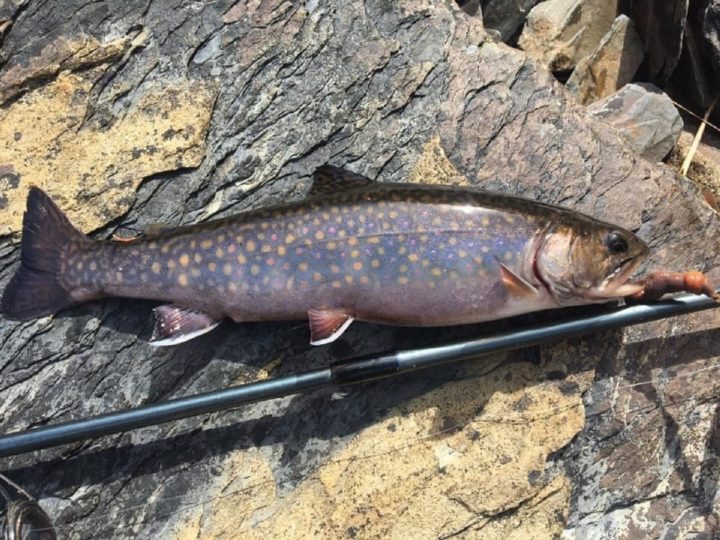 The brook trout may be a small char species, but it’s a fish with a gigantic appetite. I wanted to find out more about the diet of brookies and decided to do some research on the topic.

Both juvenile and adult brook trout eat a large variety of aquatic and terrestrial insects. They also feed on small fish like minnows and shads. Cannibalism amongst brook trout is not very common but does occur.

If you want to know what types of insects brookies dine on and what types of baits, ures, and flies they prefer, all you have to do is keep reading!

What Types of Insects Do Brook Trout Eat?

I don’t know about you, but when I think of brookies, I think flies! But that’s not the only insects they like to feed on. Not by a long shot!

As most brook trout (Salvelinus fontinalis) inhabit rivers, streams, and creeks, naturally, they have access to a great variety of insects.

Flowing water is home to many aquatic insect types, while the surrounding forests supply the fish with various terrestrial insects.

In other words, many brook trout habitats are regular insect buffets, and the fish have adapted to these food sources accordingly.

These insect types can include the following:

What Types of Fish Do Brook Trout Eat?

Like all other trout and char types, brook trout feed on other fish species.

This holds especially true for the populations in bigger lake systems (such as the Great Lakes), where insects are not always as abundant as in flowing water.

The bigger specimens of the Great Lakes and other big lake systems of the northern US and Canada can also go for somewhat bigger species such as:

What Other Animals Do Brook Trout Eat?

Brook trout are highly opportunistic feeders, meaning they can and will eat anything that can fit in their mouths.

This makes them very adaptable to a variety of habitats and environmental factors.

If one of their more common food sources is not available at any given time during the season, they can just switch to another one, and vice versa!

Other common types of animals that brookies tend to feed on include:

What Is the Best Bait for Brook Trout?

When it comes to catching brook trout, you can never go wrong with small live baits, inline spinners, or flies!

Of course, there is a great variety of baits and lures that you can catch this species on, but in my opinion, those three should always be with you on your fishing trip!

Some of my favorite live or natural baits for brookies include:

Being a fan of fishing with live baitfish, I always prefer minnows. It’s just so much fun fishing them on a simple float rig with a single hook.

You know you’re hooked up to a nice brookie when that bobber disappears!

If you’re utterly new to trout fishing, though, maybe start with a worm or waxworm instead. They’re just so much easier to get and put on your hook!

The same holds true for smaller lures, such as inline spinners or spoons; they are a solid choice for a beginner, as they are cheap, easy to fish, and very effective.

Get yourself a few size 2 or 3 Mepps spinners with shiny colors like silver or gold, and you shall not be disappointed!

Smaller jigs can also be a deadly choice for brookies if you have a little more experience with lure presentation.

And then there is the classic fly. What an incredible way of catching fish, isn’t it?

You definitely need some skills to be able to fly fish for brook trout, especially in those tiny streams and creeks with plenty of vegetation surrounding them.

But if you, indeed, master this artistic way of angling, the fly is probably the most effective lure out there!

You can catch them on all sorts of fly patterns!

Dry flies (such as Adams and Stimulators) work well for surface fishing, while wet flies and nymphs (such as the Wooly Bugger) do a fantastic job when the fish do feed on the surface.

Make sure always to have a few dry and wet flies with you, and you shall succeed!

RELATED ARTICLE: What Is the Best Way to Transport a Fly Rod?

Cannibalism among brook trout isn’t all that common, but once again, they are very opportunistic feeders, and if there is a shortage of other food sources, brook trout will eat their own.

Studies have concluded that cannibalism of juvenile brook trout is fairly uncommon in many populations and only occurs when the fish can’t find anything else to feed on and are forced to find an alternate food source.

On the contrary, egg cannibalism does occur frequently.

Interestingly, it is primarily the smaller males that tend to feed on the female’s eggs after the act of spawning has been completed.

The reason for that is mostly of an evolutionary nature! Often, more than a few smaller males mate with a female and attempt to fertilize her eggs.

And so, as no male can be sure that it, in fact, succeeded in fertilizing the eggs, many of them choose to eliminate the competition by eating up the fertilized eggs.

However, I am pretty sure that they often end up devouring their own offspring, which, to me, seems pretty counter-evolutionary.

RELATED READING: What Time of Year Do Brook Trout Spawn?

Besides feeding on their own eggs, brook trout love eggs from other fish species.

Their absolute favorites are the eggs of other trout (char) species and salmon.

So if a brook trout population shares its habitat with, say, brown trout or rainbow trout (or steelhead), it’s pretty safe to say that they will happily feast on the eggs of those trout species once they have spawned.

Great Lakes brookies also tend to feed on the eggs of the various salmon types that inhabit the lakes and migrate up their many tributaries for spawning.

In the smaller rivers, streams, and creeks they inhabit, brook trout have very few aquatic predators, as bigger fish generally do not live in those smaller habitats with them.

If there are any piscivorous (fish-eating) fish living in the same water body, it’s usually either brown or rainbow trout.

In bigger lake systems (like the Great Lakes), the list of piscivorous fish that feed on brook trout is much longer:

Otherwise, the brook trout’s most common predators include: