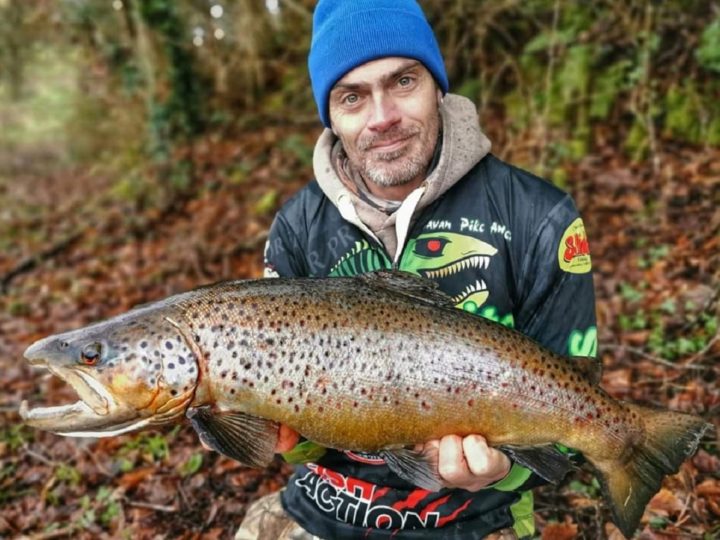 Brown trout can be found all over the world, and to many anglers, they are, by far, the most popular trout species to target.

I fish for them myself, and as it inhabits both fresh and saltwater environments, I’ve always wondered what types of prey brown trout actually eat.

Juvenile brown trout primarily feed on zooplankton, aquatic and terrestrial insects, and larvae, while adult brown trout predominantly feed on other fish, insects, and crustaceans. Both egg and fry cannibalism are relatively common in this species and can be a considerable cause of small-fish mortality.

If you want to learn more about all the types of forage that brown trout prefer in both fresh and saltwater, just continue reading this article.

What Fish Do Brown Trout Eat?

Brown trout (Salmo trutta) feed on a large variety of primarily smaller-sized prey fish. What type of fish they will eat depends entirely on the brown trout’s habitat, as they are both found in lakes, rivers, and streams, as well as in saltwater.

In North America, most brown trout will only be found in lakes and river systems, while they are a commonly occurring anadromous species in Europe.

It is here, along Europe’s Atlantic and Baltic coastlines, that the saltwater-dwelling brown trout are known as sea trout. I myself fish for them every spring in the chilly brackish waters of the Baltic Sea, along the coastal stretches of Southeastern Sweden.

It is but natural then that freshwater and saltwater browns will feed on different prey fish.

Let’s take a closer look at each of these habitats and the most common forage found in them!

What Fish Do Brown Trout Eat in Freshwater?

Brown trout inhabit many of North America’s and Europe’s lakes, rivers, and streams and are considered top predators in most of them.

As the type and level of abundance of prey fish found in all of these waters naturally vary greatly, so do the dietary patterns and preferences of the brown trout.

For example, the browns of the Great Lakes and their tributaries tend to feed on the following prey fish:

Brown trout found in many other lakes and rivers of North America, on the other hand, will instead prey on fish such as:

And, of course, European brown trout will feed on prey fish commonly found in that region of the world:

What Fish Do Brown Trout Eat in Saltwater?

The saltwater-dwelling version of the brown trout, the sea trout, will naturally have to prey on other types of fish, even though some European prey fish types, such as bleak and roach, can also be found in the brackish waters of the Baltic sea.

But apart from those few exceptions, the sea trout generally feed on the following saltwater prey fish species:

This makes it pretty apparent that the brown trout has a varied diet and is an opportunistic predator that will simply feed on the forage that is available in its habitat.

What Insects Do Brown Trout Eat?

Both juvenile and adult brown trout love insects, which is why fly fishing is such an effective method for this species. Their insect diet consists of a great variety of terrestrial and aquatic insects.

Until they are big enough to hunt down smaller baitfish, juvenile brown trout mostly eat smaller insects and insect larvae.

The bigger they get, the more piscivorous (meaning fish-eating) they will become, but they never seem to drop their appetite for delicious insects on or under the surface.

Some of the most common invertebrates they feed on include the following:

This large variety of insect prey also explains the many types of flies trout anglers will use to target browns.

Much like other trout species, brown trout are known to eat their young.

Studies have shown that predation on small fish by adult fish can be an important cause of juvenile brown trout mortality, especially in habitats with lower baitfish abundance.

Furthermore, egg cannibalism is also a fairly common behavior among brown trout, and research has shown that it can occur in up to 25% of spawnings.

Both parents and other brown trout that are not taking part in the act of spawning can and frequently do indulge in egg cannibalism.

Do Brown Trout Eat Other Trout?

Apart from eating their own, they also feed on other trout, which is not considered cannibalism, as these trout belong to other species.

In fact, all kinds of smaller trout have been found in the stomachs of caught brown trout.

Depending on their presence and abundance in any given habitat they share with brown trout, these trout species can include:

Apart from eating other trout, it has even been observed that browns occasionally devour smaller Atlantic salmon.

Remember, they are a fierce top predator, and they’ll eat pretty much anything that will fit in their mouths!

What Other Animals Do Brown Trout Eat?

While they, for the most part, keep to smaller fish and invertebrates, browns will also feed on various crustaceans and even smaller mammal species.

The obvious exception here would be the sea trout, as it will naturally have fewer insects and more crustaceans to chew on in the sea.

So when it comes to crustaceans (both freshwater and saltwater types), brown trout commonly feed on the following:

In lakes and rivers, larger browns can also go for smaller mammals, even though that’s not really a common forage for them.

The most common types of mammals would include mice and water vole.

PRO TIP: Check out the visual summary of this article in the related web story on the diet of brown trout here!

What Are the Best Baits for Brown Trout?

Honestly, you can catch brown trout on almost anything. They can be caught on various natural and artificial baits, lures, and, of course, plenty of fly patterns.

But don’t think catching browns is super easy! It can be, but it can also be a very challenging species to lure onto your hook! Never forget that!

When it comes to natural baits, which, in most cases, would be presented on a float or bobber rig, some of the best picks for browns include:

If you’re into fly fishing, you might want to take a closer look at the following flies and streamers (they can also be found on Amazon):

POR TIP: No matter what fly or lure you’re going to use, make sure always to match the hatch when choosing colors!

And if you prefer spin fishing with lures, the selection becomes even bigger. You can catch browns on any of the following lure types:

For my river fishing, I often prefer a good old Rapala crankbait or a big inline spinner that I can retrieve slowly against the current (works wonders in cold water conditions).

Of course, that’s a highly individual choice. Just try to experiment with different lure colors, types, and sizes, and see what gets you hooked up to those browns!

Do Brown Trout Have Natural Predators?

No matter if it is found in a lake, a river or stream, or the open sea, the brown trout has many natural predators.

In the form of recreational and commercial fishermen, humans are only the most obvious of them.

Besides us, browns are preyed upon by both birds, mammals, and other fish.

Some of their most common predators include the following:

Out in the ocean, they are also common prey for predators such as:

I think it’s pretty safe to say that brown trout live a pretty exciting and dangerous life! So, if you can, release them whenever you have been lucky enough to catch one of those amazing fish!

What Do Lake Trout Eat? (Preferred Prey and Baits)
← Previous
Penn vs. Shimano (Which Brand Is Better?)
Next →