What Do Lake Trout Eat? (Preferred Prey and Baits) 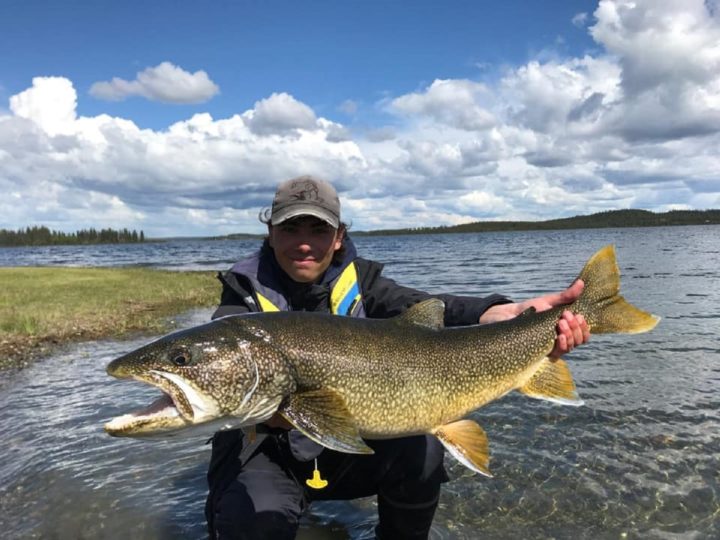 The lake trout is the largest member of the char family and a prized and popular game fish. As this fish can reach enormous sizes, I have been wondering about its diet and what types of forage lake trout predominantly eat.

A lake trout’s diet mainly consists of smaller baitfish such as minnows, ciscoes, or alewives. They also feed on various crustaceans, insects, and even smaller mammal species. Additionally, cannibalism can be observed among both juvenile and adult lake trout.

If you want to know what types of fish lakers like to eat, if they feed at night, and what the best fishing baits for lake trout are, all you have to do is keep reading!

What Do Lake Trout Feed on?

Lake trout (Salvelinus namaycush) are predatory freshwater fish that inhabit many lakes, rivers, and reservoirs in North America and feed on various smaller to mid-sized types of prey.

When the juveniles grow bigger, they switch to somewhat larger prey that consists of fish fry and larger aquatic and terrestrial insects.

Their preferred forage depends on the types of species available in any given water.

For example, researchers have found that juvenile lake trout in Lake Ontario mainly feed on slimy sculpins and alewives.

On the other hand, lake trout surveyed in Lake Superior mostly fed on rainbow smelt, which was the most abundant fish species in the studied area.

Yet another example comes from Ontario’s Lake Simcoe. Here, young lake trout gorge on the invasive round goby, which has led to a stark increase in the size of the predators.

What Fish Do Lake Trout Eat?

As you can read above, lake trout feed on many other fish. In some waters, they have to stick to only a few types of fish while eating all the baitfish species available in others.

In water bodies that hold populations of really big specimens of lake trout, they can and often will go for smaller predatory fish as well.

Here, lakers can reach impressive weights of more than 40 or even 50lb and hence be considered apex predators.

In those waters, those big fish often won’t have a problem devouring the smaller individuals of the following species:

However, they don’t generally eat vast amounts of these juveniles, as lake trout and other predators often manage to co-exist and maintain healthy populations.

Do Lake Trout Eat Their Young?

Cannibalism among lake trout is relatively common in waters with smaller baitfish populations.

Where there is no abundance of other fish species, growing and adult lake trout will eat their young. And in many lakes, this has actually led to a noticeable decrease in the lake trout’s populations.

However, in water bodies with healthy and abundant baitfish populations, lake trout cannibalism is generally very low to practically non-existent.

One study has found that the introduction of cisco in Lake Opeongo (Ontario) led to a substantial decrease in cannibalism by adult lake trout on juvenile fish, and hence to a decreased mortality in juvenile lake trout.

What Insects Do Lake Trout Eat?

Both juvenile and adult lake trout eat plenty of aquatic and terrestrial insects if and when they are available.

While the lake trout’s fry will mostly eat tiny water insects and their larvae, bigger fish enjoy to eat the following insect types:

What Other Animals Do Lake Trout Eat?

Apart from fish and insects, lake trout can also have several other types of animals on their menu.

These can include the following:

They are highly opportunistic feeders and will simply eat what’s currently available near them!

What Are the Best Baits for Lake Trout?

Targeting lakers with live or dead baitfish can yield excellent results, especially on the jigging rod.

Some of the best and most commonly used baitfish species for lake trout include the following:

Smaller baits don’t weigh as much as big ones, and if you’re using them alive, they won’t be as active and wild as bigger baitfish either, giving you more control and a far better presentation.

Another advantage of using somewhat smaller live baits is that you can usually keep them alive much longer than bigger baits, which crave a lot more oxygen.

If you prefer jigging with artificial baits instead, you should try some of the following when jigging for lakers. You can also check them out on Amazon if you like:

At What Depth Do Lake Trout Feed?

As lake trout are char, they generally prefer cold and oxygen-rich water.

This means they will feed pelagically during the summertime and somewhat higher up in the water column during the rest of the year.

During summer, when the water temperatures are higher, lakers go deeper and can often be found in depths ranging from 60 to more than 100 feet.

During the colder months of the year, lake trout often stay a little higher up in the water and feed in depths between 20 and 60 feet.

Naturally, this will vary and is dictated by weather conditions and water temperatures in any given water body.

Do Lake Trout Feed at Night?

Lake trout are active both during the day and night and will feed even in the dark.

Of course, their activity and the intensity of the night bite varies from water to water and is something you’ll have to try to find out for yourself if you are fishing for lakers.

In some lakes, nighttime fishing for lake trout can be excellent, and you’ll be able to hook up to a whole bunch of fish.

The night bite might be very slow in other lakes with only the occasional catch or two.

And in some lakes, the fish won’t be active at all. As I said, this can really differ from water to water!

PRO TIP: If you’re targeting a new lake, try to get some info from the local anglers. They’ll often tell you if it’s worth fishing during the dark hours of the day!

Do Lake Trout Have Natural Predators?

Juvenile and growing lake trout have a variety of natural predators.

Besides the most obvious ones, being humans (in the form of recreational and commercial fishermen) and adult lakers, the following predators generally also take a liking to eating younger lake trout:

Sea lamprey especially have caused many lake trout populations in the Great Lakes to decline drastically.

This invasive species, which has virtually infested the Great Lakes, preys on most of the Lakes’ fish, including steelhead, salmon, lake sturgeon, walleye, catfish, burbot, and whitefish.

Many trout and salmon populations have increased considerably since the programs started, and the Commission aims to continue with them to improve their statuses further.

What Are the Best Rods for Lake Trout? (Jigging and Trolling)
← Previous
What Do Brown Trout Eat? (Interesting Fish Facts)
Next →