What Do Muskie Eat? (Preferred Prey and Baits) 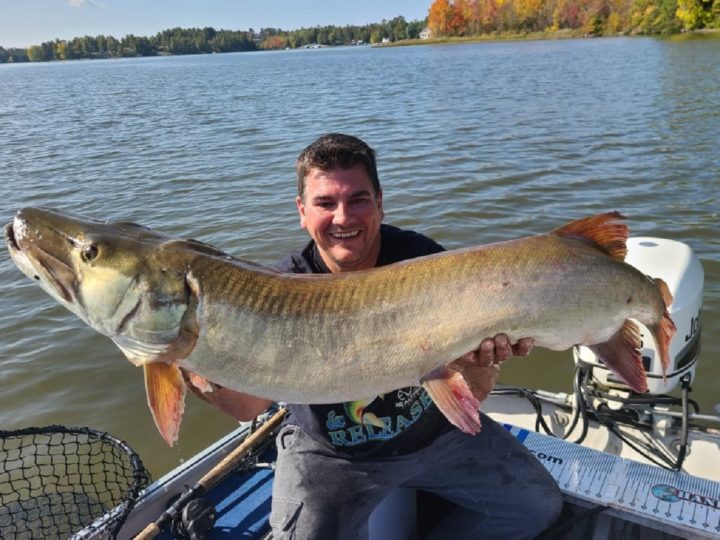 Most anglers know that muskies are apex predators that eat fish. But what types of fish do they prefer? And how big of a fish can a musky actually devour?

Juveline musky mainly feed on zooplankton, insects, and small baitfish, while adult musky primarily eat both shads, suckers, and ciscoes. They do, however, not shy away from bigger prey, such as walleye or pike, and manage to devour fish that are roughly half their own body size.

Keep reading this article and learn everything there is to know about the musky’s varied diet, what fishing lures and baits they prefer, and at what depths they tend to feed.

What Fish Do Muskie Eat?

While muskies can and will basically eat anything that gets too close to them, they prefer prey fish such as shads, suckers, and ciscoes.

The musky’s, or muskellunge’s (Esox masquinongy) diet consists of mostly fish. Studies have shown that fish composed 95-98% of its diet, to be more exact.

As this is a very large freshwater predator with a body that’s built for both power and speed, muskies need to feed on plenty of high-protein fish to sustain their growth and energy levels.

Additionally to the prey fish mentioned above, they will also eat the following species:

Of course, the musky’s main source of food will depend on its habitat and hunting grounds.

Whatever fish is most abundant within the musky’s habitat will be the predator’s preferred food source simply because it is readily available.

In shallower areas of a lake system, muskies might gorge on yellow perch or crappie, while they will mainly feed on ciscoes, herring, and other deeper water species out in the main lake areas.

Occasionally, musky will eat much bigger prey fish, such as walleye, northern pike, or lake trout.

These species are generally not a number one choice, as hunting and swallowing them will cost the musky more energy.

Still, if no other forage is available and the musky is hungry enough, it’ll most certainly go for bigger prey like this as well.

The fact that fish, such as walleye and pike, are so rarely eaten by musky also debunks the claim that musky can and will hurt the walleye populations in waters where both of these predators are found!

It’s simply not a scientifically proven fact, and there are many examples of lakes in which musky and walleye populations coexist very successfully.

RELATED ARTICLE: What Time of Year Do Musky Spawn?

Do Muskie Eat Other Muskie?

Larger muskies are known to sometimes feed on smaller muskies, and in some lakes, cannibalism among muskies has actually led to a damaged population of this predatory species.

While they don’t actively feed on their own fry, mainly because the fry and hatchlings are too small for grown muskies, they are known to swallow the occasional adolescent musky, as young fish have the perfect size to be eaten and are themselves a very protein-rich source of food.

And as musky populations are small, slow-growing, and have a relatively low reproductive rate in many waters, understandably, this can pose a real threat to the stock’s future!

How Big of a Fish Can a Musky Eat?

Both anglers and scientists have caught muskies with prey fish in their stomachs that were roughly half of the musky’s own body size, which means that they hunt and manage to devour really big prey.

And even though they tend to stick to eating fish that have sizes between 5 and 15 inches, they won’t say no to the occasional large walleye or pike.

After all, one meal like that will keep the musky filled up for quite a while. So from a long-term energy-saving perspective, eating larger fish makes a lot of sense!

A study made in lakes in Northern Wisconsin has found that most musky prey ranged in size from 6 to 47% of the musky’s total length.

This means that a 50-inch musky can swallow a prey fish of roughly 25 inches. That’s massive if you ask me!

Additionally, the paper found that prey size increased significantly as the size of the musky increased.

So, bigger musky can and often does mean bigger prey fish, even though the total number of devoured larger prey will remain relatively low.

RELATED ARTICLE: Check out this in-depth article about musky teeth. It’s got plenty of cool facts and pictures in it!

What Do Juvenile Musky Eat?

Musky fry will start to feed on zooplankton as soon as the young have hatched. Once the fry has grown to a few inches, the young will feed on small insects, crustaceans, and, unfortunately, other baby muskies.

As the musky younglings keep close to their hatching area, mainly because they are still so small and vulnerable, there’s often no other fish around, which means that they will start to devour each other.

This is yet another aspect of musky cannibalism that can severely affect a population.

Thankfully though, the musky is a fast-growing fish, which means that it will leave its hatchling stage fairly quickly and move on to eating other forage, such as crustaceans, bigger insects, and smaller prey fish, such as shads and minnows.

What Other Animals Do Muskie Eat?

Fish isn’t the only thing on the musky’s menu! If they are really hungry, or there are no common natural food sources to be found, musky can and will eat various other water and land animals.

This include the following:

Even though there a quite a few reports about giant muskies devouring someone’s dog, most, if not all, of these can only be considered rumors or urban legends, as there are really no confirmed cases on the internet.

That said, I can totally imagine the occasional bathing poodle or other small dog breed getting attacked and bit by a big and curious musky!

I saw this question on Google and just had to include it in the article, as I find it really entertaining, to be honest. No, muskies don’t eat babies or small children. They are big fish with huge sharp teeth, but they’re not that big!

Once again, this is more of an urban legend.

But there have been reports of people taking a swim and getting bitten by muskies!

This is, however, more accident than intent, I believe. And most of those bite injuries were just toes or feet that needed a few stitches.

So, don’t worry, you can keep bathing in your favorite musky lake!

What Types of Lures and Baits Do Musky Prefer?

You can catch muskies on a variety of lures and baits. When it coms to artificial musky lures, most anglers will pick bucktails as their first choice.

Other really effective lures for musky include double-bladed spinner baits, topwater tailbaits, and crankbaits. If you need to gear up, you can check out a couple of classic and high-perfoming musky lures on Amazon right here:

When fishing with live baits for musky, your number one choice of baitfish would be white suckers.

Live bluegill has also proven to be a very effective live bait for big muskies.

Dead bait can be as effective as live ones, especially when fishing in cold water conditions. Some of the best dead baits for musky include:

RELATED ARTICLE: Expert Tips on How to Catch Musky in Clear Water Conditions

At What Depth Do Muskie Feed?

The vast majority of muskies are being caught in shallow areas with a depth of 10 to 30 feet, and they rarely go deeper than 40 feet.

That’s because most muskies keep to structures and heavy cover so that they can ambush their prey in the most effective way possible.

So if you want to find them, keep to those shallower areas of your water and try to locate structures such as rocks and weed beds.

Shallower weedy bays that face deeper open water are especially hot when it comes to musky fishing; remember that when you head out!

PRO TIP: Check out the visual summary of this article in the related Web Story on musky foods and baits here!

Do Muskie Have Natural Predators?

Muskies do not have any natural predators, as they are such large and predatory fish themselves. The only real threat adult musky face comes from humans.

However, for juvenile muskies, the underwater world is a much more dangerous place.

Apart from large muskies that will occasionally eat their younger relatives, young and growing musky are at all times at risk of being eaten by the following predators:

When Do Walleye Spawn? (Interesting Fish Facts)
← Previous
Steelhead Fishing in Alaska (Where, When, and How?)
Next →