What Do Pike Eat? (Preferred Prey and Baits) 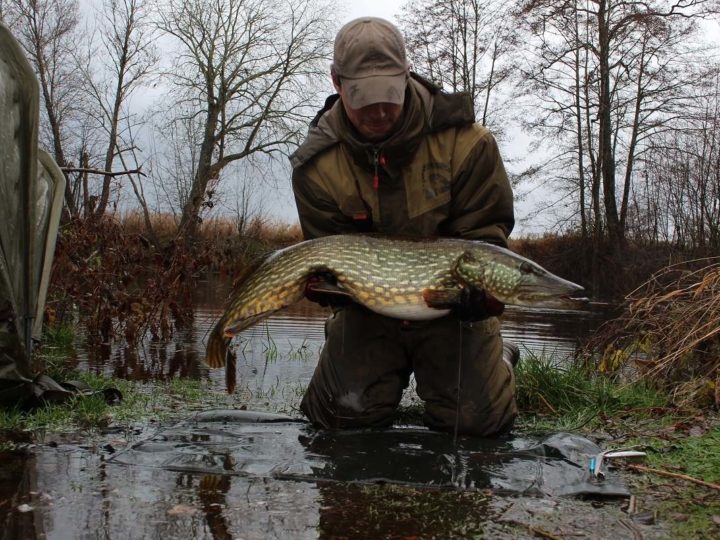 As an apex predator, it’s safe to say that the northern pike’s diet is pretty varied, and you can catch this species on almost any type of lure and bait out there. But what exactly do northern pike in their natural habitat, and what baits do they typically prefer?

If you want to learn more about the northern pike’s preferred forage, eating habits, and bait preferences, all you have to do is keep reading.

What Fish Do Northern Pike Eat?

Pike (Esox lucius) are regular feeding machines, and they’ll eat any fish that fits their mouths and stomachs. And while the pike’s most common prey includes perch, shiners, suckers, and ciscoes, there are plenty of species that it can and does eat.

As the northern pike is found in North America and Europe, I thought it a good idea to list their favorite food for both continents, as not all American baitfish species are found in Europe, and vice versa.

In the US and Canada, northern pike commonly eat the following fish species:

In Europe and the UK, the pike’s main fish diet consists of:

Really big pike will also go for bigger coarse species, such as tench, ide, and carp.

Keep in mind that the pike’s diet will vary from water to water and always depend on the baitfish types found in each habitat.

Naturally, the predator’s primary forage source will always be the most abundant species in the water body it inhabits.

PRO TIP: If you know what species is the most commonly found in your target water and match the hatch, you’ll most likely catch more pike!

Do Pike Eat Other Pike?

Cannibalism is relatively common among both grown and juvenile pike. While extensive sibling cannibalism can be observed among pike fry, cannibalistic behavior among adult fish is less common but still fairly normal if there is a lack of other forage sources and if juvenile pike are abundant.

Pike fry cannibalism can actually cause a lot of damage to a population, as studies have shown that it can account for 54-96% of daily fry mortality during the first weeks of the pike’s life cycle.

That’s a lot of devoured brothers and sisters that will never reach adulthood!

Adult pike will occasionally eat younger pike, and the cannibalism of younger fish is most often observed in waters with reduced baitfish populations.

How Big of a Fish Can Pike Eat?

Many of us anglers have seen massive pike attack and devour really big baitfish, and it is pretty common for them to swallow fish up to 1/3 to 1/2 of their own body size.

However, overpowering and swallowing such a big prey demands both a lot of time and energy, which is why pike will mostly stick to smaller baitfish sizes between 4 and 10 inches.

DID YOU KNOW: On average, it takes a pike 48h in summer, and up to 12 days in winter, to fully digest its prey.

How Much Fish Do Pike Eat?

Of course, the amount of fish that a pike will consume per year heavily depends on the amount of forage available in its habitat. On average, healthy specimens will eat 1.5 to 3 times their own body weight per year.

What Time of Year Do Pike Eat the Most?

It has been observed that pike will eat the most from May to August, with a peak in June and extremely little during the winter months.

In other words, targeting post-spawn pike in May and June will generally yield the very best results for predator anglers.

What Do Juvenile Pike Eat?

After hatching, the young pike will feed off their attached yolk sacs until they have developed a mouth and reached the larval stage. Apart from eating their siblings, larval pike mostly eat zooplankton until they grow big enough to hunt smaller aquatic insects, crustaceans, and baitfish.

As soon as they leave their larval stage behind and have reached a couple of inches in size, juvenile pike will then start to hunt and eat the following types of forage:

RELATED ARTICLE: Read this article to learn even more facts about the fascinating predator that is the northern pike!

What Other Animals Do Pike Eat?

Fish, insects, and crustaceans are not the only type of food that pike enjoy. Their diet can also consist of smaller mammals.

These mammals can include one or all of the following:

While anglers catch the occasional jack (small) pike on worms or nightcrawlers, it really isn’t a commonly used or effective bait for northern pike.

As the pike’s diet mainly consists of fish, I’d personally always stick to using live or dead baitfish, or lures, if you prefer spin fishing for pike.

Using worms as bait will only attract small pike or other smaller fish species that you most likely want to avoid when targeting big predators.

There have been no reported incidents of large northern pike eating smaller dogs.

This is one of those funny questions that you see on the Google search result pages from time to time, and I just had to include it in the article.

Frankly, I don’t think they are big enough to devour an entire dog (with the possible exception of tiny breeds like Chihuahuas, maybe).

On the other hand, reports of pike attacking swimming dogs can be found here and there on the internet, even though they happen pretty rarely.

What Is the Best Bait for Northern Pike?

You can catch northern pike on a variety of baits. Live and dead baits tend to perform very well in most waters, and catching pike with baitfish is one of my favorite ways of targeting this predator.

I just love seeing my float/bobber go under, waiting a few seconds, and then striking and feeling heavy resistance on the other end of my line.

I use all kinds of live and dead baits and most have produced bites for me.

Some of the most effective live baits for pike include the following:

Don’t shy away from smaller bait sizes! They vastly outperform bigger baitfish on some days, and I have caught some of my biggest pike on smaller shiners!

Additionally, it’s usually easier to catch smaller baitfish, as they tend to be found in larger schools near the shore. And if you buy them from a bait dealer, they’re generally cheaper than bigger baits! Win-win!

When it comes to dead baits for pike, the following species are solid choices:

Just keep in mind that some dead baits just won’t get you the bites, while others will produce bites like nothing you’ve ever seen! It all depends on the water, and experimenting with different dead baits is usually the key to success!

At What Depth Do Pike Feed?

Pike can be caught in both shallow and very deep water. They inhabit most areas in a lake or river system, which is why they don’t really have a preferred feeding depth.

I have caught pike in shallow bays of only a few feet and in open water in depths of well over 40 feet.

It all depends on the water you are targeting and the time of year, the water temperature, and the location of the pike’s forage.

My best advice to you is to target all water depths and see where you find the most fish!

Generally speaking, you will most likely find them in shallower water areas during spring and summer and in deeper water during the colder months of the year.

Study your lake or river, know where the fish like to hang out, and, more importantly, where the baitfish tend to be found, and then target these areas accordingly!

Do Northern Pike Have Natural Predators?

Even though the northern pike is an apex predator, it has a few natural predators.

Of course, the most common and obvious one is humans, mainly in the form of recreational and commercial fishers.

Additionally, both big pike and musky are considered natural predators of younger pike.

Thirdly, larger predatory birds, such as eagles and cormorants can gulp down smaller northern pike. Cormorants especially can cause severe damage to a pike population if their numbers grow out of proportion.

Steelhead Fishing in Alaska (Where, When, and How?)
← Previous
What Do Steelhead Eat? (In Freshwater and Saltwater)
Next →