What Do Steelhead Eat? (In Freshwater and Saltwater) 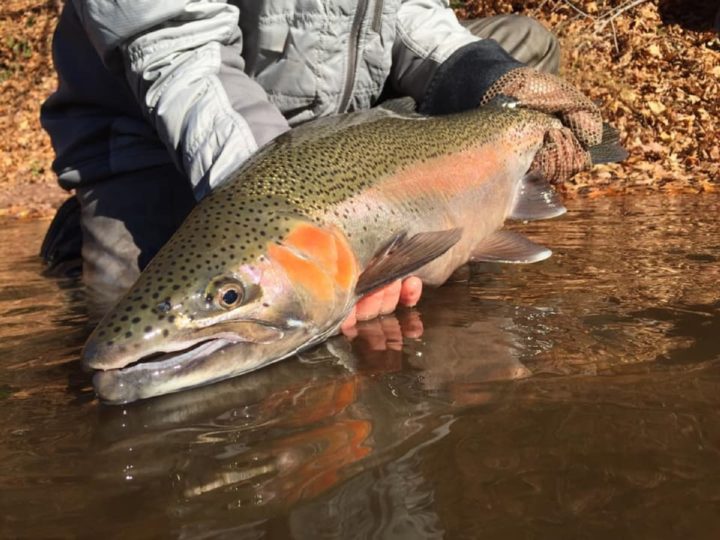 Most steelhead are caught on salmon eggs or flies, but this species’ diet is much more varied than that, especially since steelhead occur in both fresh and saltwater environments. So, what exactly do steelhead eat?

Read on and find out everything there is to know about the steelhead’s food preferences in rivers, the ocean, and the Great Lakes!

What Do Steelhead Eat in Rivers?

After having hatched, juvenile steelhead will first consume their egg sac and then start to actively feed on zooplankton and insect larvae until they are a few inches in size.

When they leave the fry stage behind, it’s time for bigger meals that can include:

After 2-3 years, it’ll then leave its home river and head out into the ocean or one of the Great Lakes, where it will spend most of its adult life.

Grown steelhead will only be found in rivers during their runs, but this doesn’t mean that the fish won’t eat during the spawning season.

On the contrary, pre and post-spawn steelhead are known for feasting on salmon eggs, which is an abundant food source for them in many rivers, as the Pacific salmon species will spawn before the steelhead!

After the salmon spawn, salmon eggs become, in fact, the steelhead’s primary food source until they hatch, that is.

When the salmon’s millions and millions of eggs have hatched, their fry becomes another preferred forage for steelhead in rivers.

Additionally to salmon fry, they also feed on other types of small baitfish.

Among those, minnows are probably the most common type of steelhead prey.

They will also feed on bigger insects, crustaceans, smaller baitfish such as minnows, and small mammals such as mice.

Mice can, however, not be considered a commonly available food source in many rivers and are hence more the exception than the rule.

What Do Steelhead Eat in the Great Lakes?

Steelhead that inhabit the Great Lakes mainly feed on crayfish, insects, and the following baitfish:

Great Lakes steelhead spawn in the lakes’ many tributaries and then return to their respective lake as adult fish.

Hence, the Great Lakes become a sort of ocean substitute for these fish.

And this brings us to the anadromous steelhead (Oncorhynchus. m. irideus), which spends its adult life in saltwater.

What Do Steelhead Eat in the Ocean?

While the sea-run steelhead’s diet is similar to that of the river-run kind, as both will eat fish and crustaceans, the steelhead’s prey out in the open sea is, nonetheless, somewhat different.

In saltwater, steelhead will commonly feed on the following forage:

It is safe to say that the steelhead’s saltwater diet is pretty similar to that of the Pacific salmon types when they are out in the ocean.

Do Steelhead Eat Other Steelhead?

Cannibalism among steelhead isn’t as common as in other trout species, but researchers have concluded that it can impact steelhead populations nonetheless.

One study on stream-dwelling brown trout and steelhead populations estimated that roughly 7.7% of observed juvenile steelhead’s stomach content consisted of other steelhead juveniles or larvae.

That’s not a huge impact, but given that larvae and juvenile fish face various other threats in their natal rivers, it’s still a considerable percentage!

On the other hand, adult steelhead tend not to consume their young in large numbers.

I didn’t find any research on egg cannibalism among steelhead.

Think about; if steelhead gorge on vast amounts of salmon eggs that float around in a river system, they must indeed also consume a fair amount of their eggs!

Because they surely can’t tell the difference between their own and other species’ eggs, can they?

So it would be really interesting to find out how many percent of the laid steelhead eggs are actually consumed by their adult steelhead.

What Fishing Baits Do Steelhead Prefer?

Steelhead can be caught on a variety of natural and artificial baits. When the bite is on, this species really isn’t all that picky when it comes to hookbaits!

Since they love to gorge on fish eggs, the best bait in many river systems is, you guessed it, fish eggs or egg imitations!

A frozen salmon egg, egg sacks (what’s commonly referred to as roe bags), or plastic beads or fly patterns that look like fish eggs; the choices are plenty and pretty much all of them will get you hooked up!

Not all states and rivers allow the use of natural eggs as bait for steelhead fishing, so it is essential to check fishing regulations before you head out!

But really, egg imitations will do just as fine on most rivers!

They come in different sizes and colors, and most anglers prefer to use orange, pink, chartreuse, or red eggs, as they stick out visually and often attract the fish more than less apparent colors.

On many rivers, the popular scrambled egg fly pattern, which is made from synthetic yarn can be especially productive!

Other commonly used baits for steelhead can include:

RELATED ARTICLE: Check out this article and learn about the best weather conditions for steelhead fishing

Do Steelhead Have Natural Predators?

Steelhead have plenty of natural predators, both when dwelling in rivers and out at sea. They are common prey for various fish, birds, land-dwelling mammals, and of course, for humans.

Especially in rivers, steelhead are easy prey for predators, as they occur in great numbers and, often, in fairly shallow water.

Here, many steelhead fall victim to predators such as:

Additionally, plenty of anglers target them during their runs, as they are both excellent sport fish and table fare.

In saltwater, they also fall victim to various predatory birds and salmon, as well as even larger predators such as:

So as you can see, this fish species is living quite dangerously, even though many steelhead can be considered fairly stable and healthy!

What Do Pike Eat? (Preferred Prey and Baits)
← Previous
What Are the Best Rods for Lake Trout? (Jigging and Trolling)
Next →