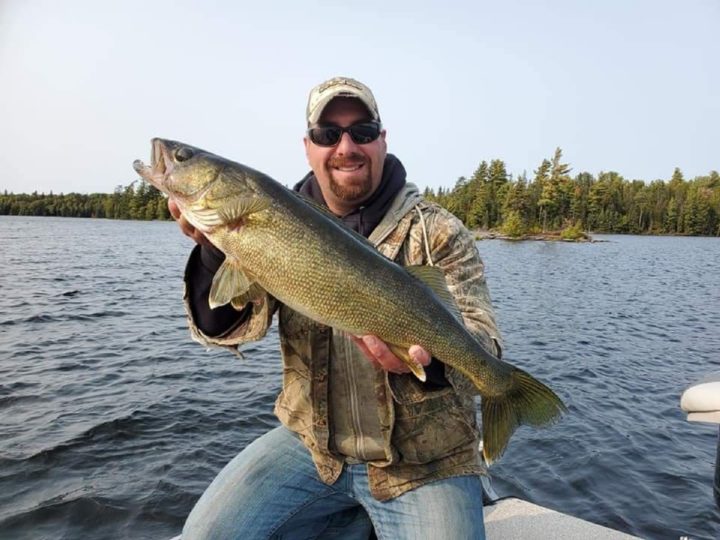 Walleye are one of North America’s most popular gamefish. Being a predator, it’s apparent that they mostly eat fish, but what types of fish do walleye eat specifically? And do they have any other food sources as well?

Find out more about the walleye’s preferred food sources and whether or not they’re cannibalistic by reading this article.

What Fish Do Walleye Eat?

Walleye (Sander vitreus) are ambush predators that hunt and eat a variety of smaller baitfish. Most commonly, these include yellow perch, minnows (shiners), and shads.

However, researchers have observed walleye with more than a dozen different prey fish types in their stomachs, making them highly opportunistic predators.

The species of fish that walleye will feed on most depends on which species is most abundant in any given lake.

If their typical food sources are unavailable or scarce, they do not shy away from other, less conventional baitfish.

An example here is the walleye population found in Lake Winnipeg in Manitoba, Canada.

Here, researchers have caught walleye that were stuffed with juvenile rainbow smelt.

It remains unclear if this introduced species was the preferred prey of the walleye in the lake or if it simply was the most abundant food available in this ecosystem.

The fact is that the walleye were eating the rainbow smelt and that the fish thrived on them, as the scientists observed increased growth and condition of the walleye.

Really large walleye can also eat somewhat larger prey, such as younger smallmouth bass, crappie, or bluegill, even though these species are rarely found in walleye stomachs.

This is most likely due to these species’ rounder body shape, making it harder for the walleye to swallow them.

Now that we know what kind of food fully-grown walleye prefer, let’s look at what young walleye tend to eat.

Insects play a vital role in the young walleye’s growth. Insect larvae such as those of mosquitoes and mayflies are the main diet of a juvenile walleye.

Burrowing mayflies especially are vital for young, growing walleye, as they can be caught pretty easily and are an extremely abundant food source, as they hatch in great numbers.

The small walleye often stick close to the bottom of the shallower areas of the lakes they inhabit, where the nymphs of the mayfly are most commonly found.

Here, the insects will remain for several years, providing the juvenile fish with protein-rich food for a very long time until they are big enough for larger prey.

Once they grow bigger, walleye will move on to pursuing larger aquatic insects and crustaceans.

Here is a secret for you: walleye love crayfish! They love everything about them; their color, their taste, their abundance in many lakes!

I know of many anglers that have found plenty of half-digested crayfish in the stomachs of the walleyes they’ve caught. Some have even seen them puke up crayfish parts while being kept in their live wells!

Much like perch, walleye will feast on crayfish throughout the year, no matter if their shells are soft or hard.

Their teeth and jaws don’t have a problem cracking these crustaceans open, even though many people believe they do, which is why crayfish is such an underrated bait among walleye anglers.

I mean, think about it! Crayfish have a lot of protein in their meat, they inhabit many lakes in vast numbers, and they taste delicious (I love to eat them myself).

So, why would walleye, and pretty much all other top predators, not eat them!?

Hence, if you are fishing for walleye in a lake with a healthy crayfish population, use them as bait or use soft or creature baits that resemble crayfish (in both shape and color). You can thank me later!

The walleye is a piscivorous (meaning feeding on fish) species that is also cannibalistic. Cannibalism can be observed in both adult and juvenile walleye and is more norm than an exception.

If other food sources are scarce or a surplus of adult fish is present in a water body, grown walleye will often feed on their smaller counterparts.

This cannibalistic behavior in adult walleye is widespread in many lakes and rivers and can affect the population dynamics of the species in that ecosystem.

This also explains why walleye populations can be sustained in waters where conventional food sources are limited. They just keep producing and eating their young, which is typical behavior among yellow perch as well, by the way.

But it’s not only the adult fish who eat up their young. Cannibalism is also commonly observed in larval walleye.

Apparently, walleye larvae all try to cannibalize each other, which is a little comic if you ask me.

Researchers have even observed chains of up to four juvenile fish that all try to devour each other. This the young walleye do even if their counterpart has the same size they do.

In other words, they’re a pretty hungry and cruel brood!

RELATED ARTICLE: How Big Do Walleye Get? (Average and Record Sizes)

What Other Fish Eat Walleye?

Younger walleye up to approximately 8-10 inches are eaten by big largemouth bass, northern pike, and musky.

As walleye are abundant in many water bodies and populations often consist of predominantly younger fish, they are a common food source for such top predators.

Once the walleye reach a size of more than 10 inches or so, they are commonly no longer threatened by these other species and instead become top predators themselves.

However, really huge northern pike and musky with big walleyes of 15 inches or more in their stomachs are being reported from time to time.

These two apex predators are known for their large mouths and limitless appetite. So if a big pike or musky decides to dine on a large walleye, it’ll do so and probably succeed most of the time!

But generally, adult walleye are not eaten by any other fish and really only have one natural predator in their habitat; humans.

Who Makes Nitro Boats? (And Where Are They Made?)
← Previous
What Are The Best Ice Fishing Rods for Lake Trout?
Next →