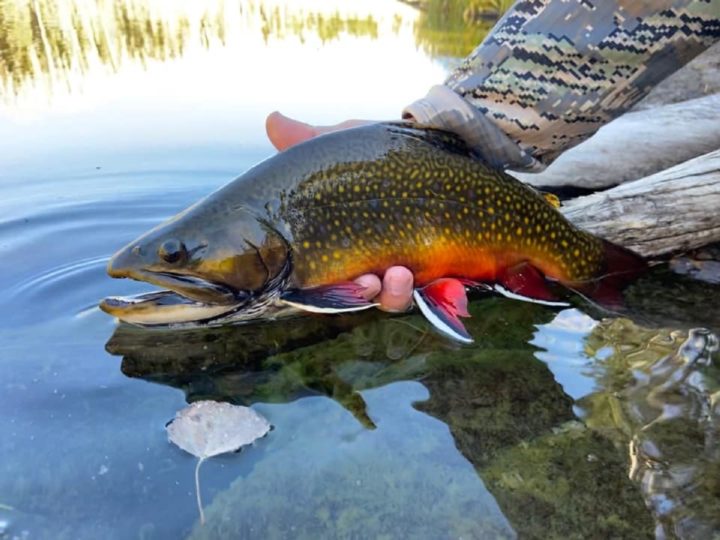 While not being the largest member of the trout family, brook trout are nonetheless a very popular trout species that many anglers target.

Many anglers don’t know much about the brookie’s spawning behavior, which is why I decided to write an article about this interesting topic.

Brook trout will spawn during the fall. Generally, their spawning period is sometime between September and November, when water temperatures are between 42 and 52F.

If you want to learn more about when, where, and how brook trout are spawning, all you have to do is keep reading.

What Time of Year Do Brook Trout Spawn?

Much like their close relatives, the brown trout, brook trout (Salvelinus fontinalis) need cooling and well-oxygenated water to spawn in and will commonly do so between September and November.

Many factors can influence the brook trout’s exact time of spawning. They include the following:

Studies have shown that warmer summers can and often do delay spawning by several weeks, causing the fish to spawn in late November or early December.

But if all the above factors play well together, you can be pretty sure to spot spawning brook trout in your local stream or river sometime during the fall.

But let’s take a closer look at the brook trout’s temperature range for spawning and how it can influence the survival rate of the eggs.

At What Water Temperature Do Brook Trout Spawn?

Brook trout will spawn in water temperatures of 42 to 52F (6 to 11C). Once the temperature goes below 60F, the fish will seek out their spawning grounds and prepare for the coming act of spawning.

According to another scientific study, the upper median tolerance limit for a normal hatch is around 54F.

On the contrary, the optimum temperature for a successful brook trout spawn is 42 to 44F.

So why don’t they just always spawn at such lower temperatures? Well, that’s where the factors I mentioned earlier come in.

Sometimes, the fish are simply forced to spawn in higher water temperatures if and when the other conditions (such as current, water level, and dissolved oxygen levels) are just too good to ignore.

The problem is that spawning in higher water temperatures, or a delayed spawn caused by warmer summers, can lead to two major negative outcomes:

In other words, a warming climate can have a direct negative impact on a brook trout population.

Where Do Brook Trout Spawn?

Brookies spawn in streams, tributaries, and rivers. They will choose shallow spawning grounds with gravel bottoms and fast-flowing water.

A strong current ensures plenty of oxygen for the eggs.

The gravel will have to be clean and loose, meaning there is plenty of space between the pebbles.

This is crucial, as dirt or silt between the pebbles will literally choke the eggs to death, while a too tightly packed gravel bottom will not allow the eggs to sink into it and get attached.

Can Brook Trout Spawn in Lakes?

Lake-run brook trout will spawn in their lake’s tributaries or along the shorelines where tribs or streams mouth into the lake.

If the lake they inhabit has no tributaries with flowing, oxygenated water, they will still spawn in shallow near-shore areas.

But as such parts of a lake often hold warmer, and hence less-oxygenated water during the fall or early winter, the success rate of such lake-based spawns can sometimes be somewhat lower.

What Time of Day Do Brook Trout Spawn?

Unlike the lake trout, which will spawn at night, brook trout will spawn during the daytime, which is something they have in common with browns.

This makes locating spawning brookies and watching this fascinating act of nature much easier for observers.

So if you have a shallow river or stream with brook trout in it, spend a day along its banks and try to find those spawning fish. It’s captivating and interesting to witness, especially for kids!

How Do Brook Trout Spawn?

First, the female brook trout will work on the nests (redds), building them by thrashing its tail fin above the gravel bottom, hollowing out small, concave holes.

While the female es busy with the redds, the male brookie will be nearby to guard the area.

Once the nests are built, and the conditions are right, both male and female brook trout will release their eggs and milt into the redds.

When the act is completed, all that’s left to do for the fish is cover the eggs with the surrounding gravel, once again, by thrashing their tails.

How Many Eggs Do Brook Trout Lay?

Due to their relatively small body size and the fact that brook trout lay fairly large-sized eggs, female brookies lay fewer eggs than most other trout species.

Can You Catch Brook Trout During the Spawning Season?

While it is possible to catch brook trout during the spawning season, many anglers tend to avoid doing so, and for good reason!

As this article has explained, brookies are pretty sensitive to external conditions, making a successful spawn anything but easy.

Furthermore, as they do not lay all that many eggs and generally have a slowly growing population, it makes a lot of sense to skip fishing for brook trout during the spawning period.

Quite a few angling communities and DNRs around the US are even calling for a complete ban on fishing for spawning brookies during the fall.

That might sound drastic, but letting such a vulnerable fish species as this one spawn in peace can do much good.

And it’s not like you can’t target them during the rest of the year or fish for other species during the fall, right?

In my humble opinion, this is definitely the right and sustainable thing to do! Future brook trout generations and trout fishers will thank you!

Do Brook Trout Spawn More Than Once a Year?

Like most freshwater fish species, brook trout can only spawn once a year.

And as this trout species is relatively short-lived, with an average maximum age of just five years, they must make every spawning occasion count!

When Do Brown Trout Spawn? (Interesting Trout Facts)
← Previous
How Big Do Brook Trout Get? (Average and Maximum Sizes)
Next →