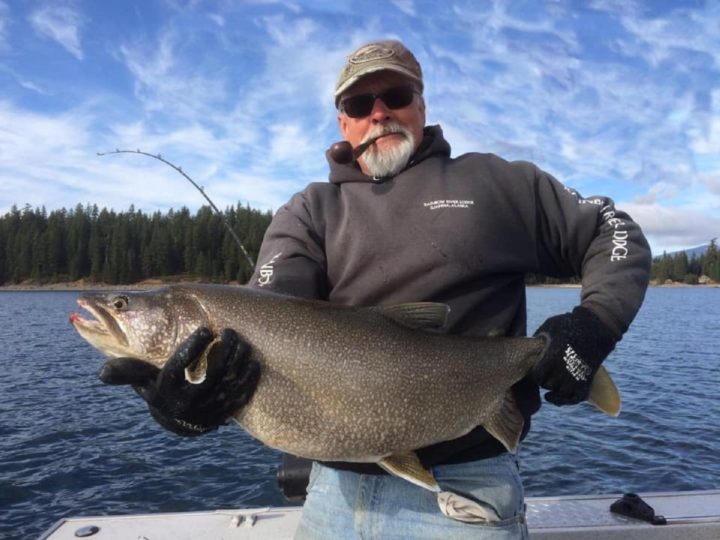 The lake trout is one of northern North America’s most popular game fish.

Targeting them during the spawning season can often be easier than during the rest of the year, so I wanted to learn more about the laker spawn and researched the topic extensively.

Read on and find out everything there is to know about the lake trout spawn and the best ways of catching lakers during this time of year.

What Time of Year Do Lake Trout Spawn?

Unlike most other freshwater predators, lake trout (Salvelinus namaycush) actually spawn during the fall. Depending on their range and the water temperatures, their spawning season typically stretches from September through November.

Of course, the further north they’re found, the earlier they will spawn, as a successful spawning requires water temperatures that are not too low yet.

Consequently, the lake trout populations of northern Canada commonly spawn in September (and in some years even in August), while their more southern relatives that populate the regions along the US-Canadian border will spawn sometime during October.

And the lakers that are found even further down south, which would be the southern areas of the Great Lakes and the populations that inhabit certain regions of the Midwest, will spawn as late as November (and in some years even December).

However, if you want to fish for lakers during this time of year, it’s important to remember that spawning periods often vary!

This depends not only on their distribution but also on the weather patterns, which, of course, can differ significantly from year to year.

During a hot fall, they might spawn as late as November in the Great Lakes.

Similarly, they will spawn as early as mid-August up in northern Canada if the fall is short and unconventionally cold.

The point is, they don’t go after the calendar, and if you want to catch them during the spawning season, the best thing to do is to frequently check the places they hang out at during this time of year.

Where are those places, you ask? Just keep reading and find out!

Do Lake Trout Spawn in Lakes?

Most lake trout do spawn in lake systems, even though some populations have been observed to be adfluvial, meaning they are fish that spawn in tributary streams.

However, those adfluvial lakers are relatively uncommon, and I would guess that most of them will be found in the Great Lakes region.

But just imagine, for a second, to fish a smaller tributary and then hook up to a giant pre-spawn laker female! That’s one fight you’ll probably never forget!

But as I wrote earlier, the majority of lake trout do spawn in the lake systems they inhabit.

If you think about it, this is actually quite an interesting fact because basically, no other trout species will spawn in still water conditions!

Since they are apex predators that have lived in lake systems for thousands of years, I presume that they have managed to adapt to these habitats and their conditions over time, enabling the fish to spawn in those same conditions as well!

So now we know that most lakers spawn in the very lakes they inhabit. But what depths do they prefer for their spawning?

At What Depth Do Lake Trout Spawn?

Lake trout will seek out shallow, nearshore spawning habitats to lay their eggs. Those areas of the lake will most commonly have a depth of 3 to 10 feet.

At What Water Temperature Do Lake Trout Spawn?

Most lake trout spawn in water temperatures between 45 and 55F.

During early fall, when water temperatures are still somewhat higher (between 55 and 60F), they will start to gather in bigger schools and head toward their spawning grounds in the shallower areas of the lake.

There, they will wait until the water temperature drops to around 50F, which is when they will commence with the act of spawning.

So, generally speaking, you’ve got a window of a couple of weeks and up to a month, in which the water temperature will drop from around 55F to 50F or somewhat lower.

As you’ll be targeting the shallows, you can bring a water thermometer with you on your trips. It’ll help you get the timing right!

Because once the water temperature drops below 45F, the game is pretty much over!

What Type of Bottom Do Lake Trout Use for Spawning?

Lakers prefer hard bottom features such as cobble, pebble, rock piles, gravel, and rubble to lay their eggs on.

Rubble patches, natural or artificial, consisting of sharp, broken rubble of a few inches to a few feet in diameter, seem to be especially interesting for spawning lake trout.

So if you can, try to hit those types of structures and bottoms! You’ll probably be able to hook up to more than one big, fat, pre-spawn laker!

Smoother rubble, or soft lake bottoms, on the other hand, are generally avoided by the lake trout! For you, the angler, that means: stay away from soft bottom areas and silt!

DID YOU KNOW: Once fertilized, the eggs will slowly fall between the cobble, pebble, gravel, or rubble. Here they stay safely out of sight for 4 to 5 months, until they hatch.

Can You Catch Lake Trout During the Spawning Season?

As we’ve established, lake trout prefer the shallower areas of a lake for spawning. And that’s excellent news for us anglers!

While they are found in extreme depths during the rest of the year, they can be targeted very close to the shore during their spawning season.

In fact, you often don’t even need a boat to catch them now! That’s pretty much impossible before and after the spawning period!

Now, though, you can comfortably cast at them from the shoreline or a pier. And with a little luck, you’ll probably be able to hook up to more than one laker!

They are also quite hungry during the spawning season!

After all, they can grow huge, and big fish need a lot of food to sustain their energy levels. Especially now, before the spawning!

Some anglers even argue that this time of year is the best one to target lakers! I don’t know about that, but hitting them now can definitely be highly productive!

How Many Eggs Do Lake Trout Lay?

On average, a female lake trout will lay between 400 and 1,200 eggs per pound of body weight.

How Heavy Do Lake Trout Get During the Spawning Season?

Depending on the number of eggs the female produces, its body weight can be increased by 10 to 20%, which is quite substantial for the bigger fish.

If we take the same weight examples as above, that would mean that our 8 pound female laker could weigh just under 10 pounds during the spawning season.

The 15 pounder could increase its weight by up to 3lb, now weighing in at a respectable 18lb.

And our big girl of 30 pounds could, during the spawn, weigh up to 36lb instead! That’s quite a big difference, wouldn’t you say?

Do Lake Trout Spawn More Than Once a Year?

Like most other fish species, lake trout are iteroparous, meaning that they have multiple reproductive cycles throughout their lifetime.

Hence, lake trout can only spawn once every year.

8 Best Fishing Reel Brands (For Fresh and Saltwater Fishing)
← Previous
How Big Do Lake Trout Get? (Average and Record Sizes)
Next →