When Do Largemouth Bass Spawn? (A Helpful Guide) 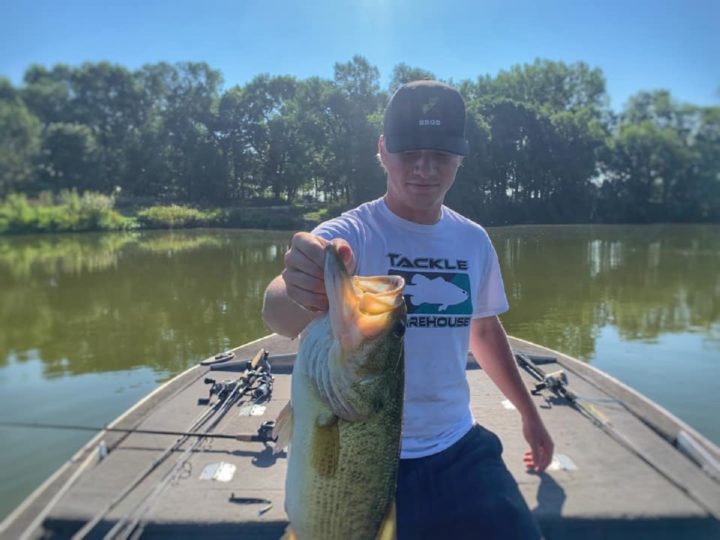 Springtime means spawning largemouth bass. While the males are busy building their nests, the females are finalizing their egg production and getting ready to release them.

The spawn is extremely interesting and an exciting time for anglers. But when exactly do largemouth bass spawn?

Largemouth bass will spawn sometime during April and June, depending on their geographical distribution. They typically spawn in water temperatures of 65 to 75F and near-shore areas with a depth between 1 and 4 feet.

Read on and get all the facts and valuable tips about the largemouth bass spawn!

What Time of Year Do Largemouth Bass Spawn?

Depending on their range, largemouth bass will spawn during early spring and early summer, most commonly sometime during April and June.

Of course, the exact time of spawning can vary from year to year due to changing temperature and weather patterns and varying lengths of the winter season.

To give you a general idea of the largemouth’s spawning periods in different regions and states, I went ahead and gathered the data:

Please keep in mind that these are really just general periods that can differ somewhat from year to year!

A better way of knowing if the bass spawn is on is by checking your water’s temperature!

Where Do Largemouth Bass Spawn?

Largemouth bass seek out shallow, near-shore areas for their spawning and commonly prefer water depths between 1 and 4 feet.

They mostly spawn over hard ground such as sand, gravel, or mud. If any type of cover or structure accompanies those bottom features, you’ll most likely find spawning bass there!

Such cover or structure can include the following:

The combination of shallow water and cover has several advantages for the largemouth bass:

If you can locate such spawning grounds or, even better, the largemouths’ nests, you’ll have a huge advantage and be very likely to land some big pre-spawn fish.

How you should target largemouth bass during the spawn and what baits you should use will be covered further down in this article, so keep reading!

At What Water Temperature Do Largemouth Bass Spawn?

The length of the seasons might change, but the water temperature at which largemouth bass spawn always remains the same. In most waters, bass will spawn in temperatures between 65 and 75F.

Once the shallower areas near the shore reach a water temperature in the high 50s, the males will move in to start building the nests.

The female largemouths will follow them when the temperature enters the low 60s and remains stable over a couple of days.

The bass will start spawning as soon as the water temperature is around 65F.

Interestingly, they can abruptly pause their spawning activity if temperatures are getting too high (over 80F) or too low (under 60F) to ensure their eggs’ survival.

This usually leads to a second or even a third spawning round once the temperatures are in the proper range again.

This phenomenon of multiple spawning will be covered further in the article, so make sure to keep reading!

How Many Eggs Do Largemouth Bass Lay?

Adult largemouth bass females can lay an average of 3,000 to 4,000 eggs per pound of their body weight.

How Heavy Do Female Largemouth Bass Get During the Spawning Season?

The eggs of the female largemouth bass will add an extra 10 to 15% to the fish’s overall body weight. The closer the spawning gets, the heavier those eggs, and consequently, the female bass will weigh.

So if you’re into weights and trophy bass, targeting big pre-spawn females might be just the thing for you! (But please handle them properly and practice catch and release whenever you can)

To give you a better idea about the difference in weight, I ran some numbers and created this little table:

So as you can see, a largemouth female caught during the spawning season can weigh significantly more than during the rest of the year!

What Is the Best Bait for Largemouth Bass During the Spawn?

Alright, so you know when and where to find spawning bass. Now, you’ll want to know what you should hit them with!

What’s important to remember is that largemouth bass will be extremely territorial and aggressive during the spawn!

So if you throw baits at them that will trigger their defenses or simply irritate them, you’ll be golden!

Remember that those fish are not in the mood to feed, so you will have to aggravate them to get hooked up.

And how do you best do that? Well, with baits that have one or several of the following features:

Basically, use anything that could irritate them and cause a reaction strike.

Your top picks will either include noisy, brightly-colored cranks or jigs, or naturally-colored softbaits or creature baits that resemble egg predators (sunfish!).

The following are some of the most effective baits for (pre-)spawning largemouth bass. You’ll find all of these top bass baits on Amazon if you want to take a closer look:

Again, try to locate the nests and the bass that will be close to them, throw your baits as close to them as possible, and enjoy those fierce reaction strikes and insane pre-spawn bass fights!

RELATED ARTICLE: How to Catch Largemouth Bass in Clear Water? (WIth Color and Bait Tips)

Should You Fish for Spawning Largemouth Bass?

This is a much-debated question, and the answer isn’t all that easy. In waters with large and healthy largemouth populations, fishing for them during the spawning season doesn’t do any harm if you handle the fish correctly.

On the contrary, targeting spawning fish should best be avoided in waters with decreasing or critical bass populations so that they may recover and become more robust again.

If a population is deemed sustainable, I don’t see any issue in targeting bass during the spawn.

I target pre-spawning predators myself, and many other anglers do the same in the waters I fish in. I have yet to see a negative impact on those populations due to fishing pressure during the spawning season!

Of course, proper handling of those fish should always be a priority, especially when they’re about to spawn!

So if you land your fish safely, handle it quickly and properly, and then release it near its nest, in my opinion, you’re good to go to catch largemouths during the spawn!

PRO TIP: Just want a quick visual summary of this article? Then check out the related Google Web Story on the largemouth spawn!

After the spawning is completed, the females will leave the spawning grounds while the male largemouths stay behind to guard the nests.

They do so for several reasons that are all highly vital to the survival of the young:

The guarding of the eggs and fry may take 2 weeks or more, and males will only leave the nest if water temperatures drop to 60F or lower.

The eggs will usually not survive such cold temperatures, so the male basically gives up and abandons them.

RELATED ARTICLE: What Is the Best Color for Largemouth Bass in Clear Water?

While largemouth bass only have one spawning period per year, they can actually spawn two or three times in a row.

Females will typically release half of their eggs in one nest and then move on to the next to spawn with yet another male.

Additionally, it is not uncommon for largemouth bass to spawn a third time, about one month after the regular spawning period is over.

Do Largemouth Bass Eat Their Young?

Despite being overly protective parents, male largemouths occasionally eat their own young, even though cannibalism is limited in waters with enough forage.

However, if a lake or river system lacks adequate amounts of other food sources, largemouth bass, being opportunistic feeders, will turn on their young and eat them.

An extensive study on a lake in Michigan, where largemouth bass were the only fish species, has shown that cannibalism can be fairly common in such waters.

And even though it had a significant effect on recruitment and the overall population structure of the bass there, it was also a vital source of energy for them, creating a sort of weird but effective balance, as it ensured the future survival of the population.

This gear and tackle is of top quality and sells at a very decent price on Amazon.

An awesome baitcasting rod of the highest quality! This rod is super lightweight, has great sensitivity and phenomenal action. Fits both beginners and seasoned bass pros. Easily the best baitcasting rod for the money!

An affordable high-performance baitcaster reel that’s perfect for bass fishing. Abu Garcia gear basically lasts forever, so you don’t have to worry about buying a new reel anytime soon! Makes for a great bass combo together with the Ugly Stick!

Without a doubt, one of the best braids available today. Zero stretch, great feel, and immense strength make this line the perfect pick for bass in both open and snaggy waters. Put on a 15 to 25lb test, and you’re good to go!

How Big Do Largemouth Bass Get? (With Average and Record Sizes)
← Previous
How Do You Transport a Fly Rod? (3 Expert Tips)
Next →