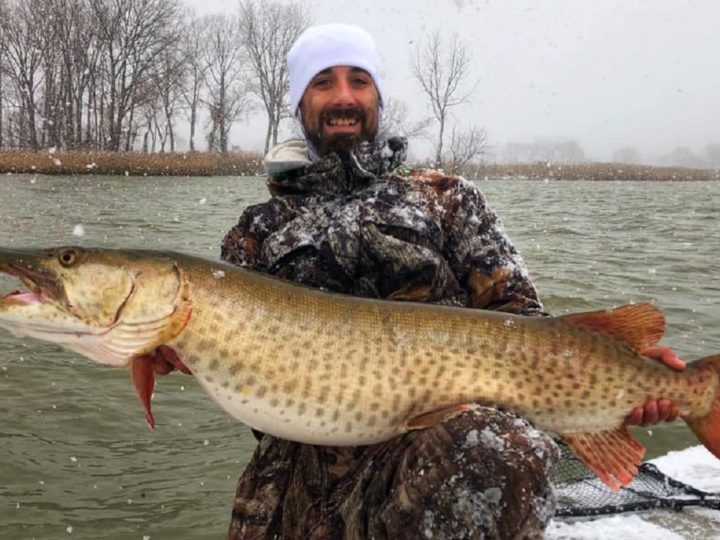 Muskie are tough-to-catch predators any time of the year, and spring is no exception.

Knowing when they spawn, where they hang out during the spawning period, and how to target them can, however, significantly increase your chances of catching this apex predator.

Depending on their range, muskie generally spawn between late March and mid-June. They will spawn in water temperatures between 45 and 60F in lake or river areas that are both shallow and weedy. Muskie tend to spawn at night or during the early hours of the morning.

If you want to learn more about the muskie spawn and how to catch them during this time of year, all you have to do is keep reading!

PRO TIP: Need new gear for the upcoming muskie season? Then check out this quality equipment on Amazon.

It’s very cost-effective, durable, and can handle any trophy musky with ease!

What Time of Year Do Muskie Spawn?

Musky (Esox masquinongy) spawn during spring or early summer. This period generally stretches from late March through mid-June, depending on their geographical distribution.

The further north the apex predator will be found, the later it will spawn.

Consequently, the musky’s southern populations in North America will spawn earlier in the year.

Of course, as water temperature is the most crucial factor for the muskie’s time of spawning, there isn’t a set annual date for their spawn!

A short and mild winter will ultimately lead to an earlier spawning season, no matter the fish’s range.

And of course, the exact opposite is true for long and harsh winters. After those, the musky’s spawning season might be somewhat delayed.

So that’s always something to keep in mind when checking data like the one presented in the following table:

When Do Muskie Spawn in Different Parts of North America?

At What Water Temperature Do Muskie Spawn?

For a successful spawn with a high egg survival rate, muskie need a water temperature between 45 and 60F. The muskie’s optimal spawning temperature lies somewhere between 52 and 55F.

Higher water temperatures are critical to highlight in this regard because muskie eggs and fry are highly susceptible to water that is too warm and thus contains lower amounts of oxygen.

If oxygen levels in the warmer water reach a critically low level, the fry will not be able to survive. Especially since the musky’s fry is sessile for up to ten days after hatching, meaning that it is immobile and fixed in one place.

And as muskie spawn and lay their eggs in very shallow water near the shore (which will be discussed further in the next section of this article), sudden temperature increases are pretty common.

This interesting fact explains why muskie populations in many waters are relatively small!

What Depth Do Musky Spawn at?

As mentioned above, musky spawn in very shallow water. More specifically, the fish will seek out near-shore areas with a maximum depth of 2-3 feet to spawn in.

Such areas almost always include heavy vegetation and, when it comes to lake systems, are most commonly found in larger bays.

Shallow and marshy bays that get hit with some sunlight are very popular among musky, especially if a river or creek is flowing into them.

Mouths of smaller rivers or creeks are especially interesting, as the incoming water will increase oxygen levels and keep water temperatures at a strady level.

DID YOU KNOW: It’s not all that uncommon for some musky females to spawn twice. Several weeks can pass before the second spawning session may commence.

Where Do Muskie Spawn in Rivers?

Generally speaking, the same spawning areas apply for both lake and river-dwelling muskie.

Obviously, you won’t find as many shallow bays, but shallow, marshy, or weedy shoreline areas, flooded banks, and off-current shallows are the prime spots for spawning musky.

As a rule, it can be stated that musky will use the same areas for their spawn as northern pike do.

This also explains why the musky’s spawning period is somewhat later than the pike!

Northern pike fry commonly has a much higher survival rate.

And as their hatchlings tend to be very hungry and start to predate on other species basically from day one, the presence of pike fry would decrease the musky fry’s survival rate even further.

Do Musky Bite During the Spawning Season?

While actively spawning musky are often extremely difficult to catch, the pre-spawn period is generally considered one of the hottest times of year to target muskie.

Partly, that’s because you can actually find several fish in the same spot, and partly because the fish are more easily located during the spawning season, as they are now found in very shallow and often clear water.

However, pre-spawn muskies aren’t the hungriest of creatures, which is why hitting them with big and noisy baits is crucial during this time of year.

Try using the following baits when targeting pre-spawn musky (you can check them out more closely on Amazon by clicking on the respective link):

DON’T FORGET: Make sure always to check your DNR’s regulations, rules, and seasons for musky!

Fish with anything that has either bright or very dark colors and that sounds a lot, so that you’ll get the musky’s attention.

Once again, it’s not all that much about appetite during the spawning season. Instead, it’s all about aggression and territorial instincts. Use that to your advantage when targeting them!

Where Do Muskie Go After They Have Spawned?

While male musky tend to stay around for a few days, the bigger females will leave the spawning grounds almost immediately after the act is done.

They will return to their habitat’s deeper open water areas to both rest, recover, and then, eventually, start feeding again.

How Many Eggs Do Muskie Lay?

A mature female muskie can lay between 20,000 and 200,000 eggs. The number of eggs will depend entirely on the female’s body size.

Of course, it’s important to remember that these are mere average numbers. Naturally, egg production will vary from water to water, population to population, and individual musky to musky.

Do Muskie Spawn More Than Once a Year?

Like most other fish species, the muskie is an iteroparous fish, meaning that it has a reoccurring reproductive cycle that happens once a year.

This is a commonly asked question since many anglers catch muskie with eggs or milt in them already during the fall or winter season. And hence, they think that the fish might be spawning several times a year.

However, many fish species can produce their eggs fairly early and then simply carry them through the winter until the actual spawning season.

This can be pretty confusing, especially to anglers who are new to the sport! I know because I’ve had the same thought many times in my early years!

A versatile and beautifully made medium-heavy 8 to 9′ baitcasting rod that’s perfect for big predators. Has an awesome balance, action, and sensitivity. An excellent musky rod with a dream-like performance!

An affordable, high-performance baitcasting reel with amazing precision. Casts super smoothly and will last you forever! Makes for the perfect muskie combo together with the St. Croix Mojo rod.

One of the best braids available today. Zero stretch, great feel, and immense strength make this line the perfect pick for muskies in both open and snaggy waters. Put on a 65 or 80lb test, and you’re good to go!