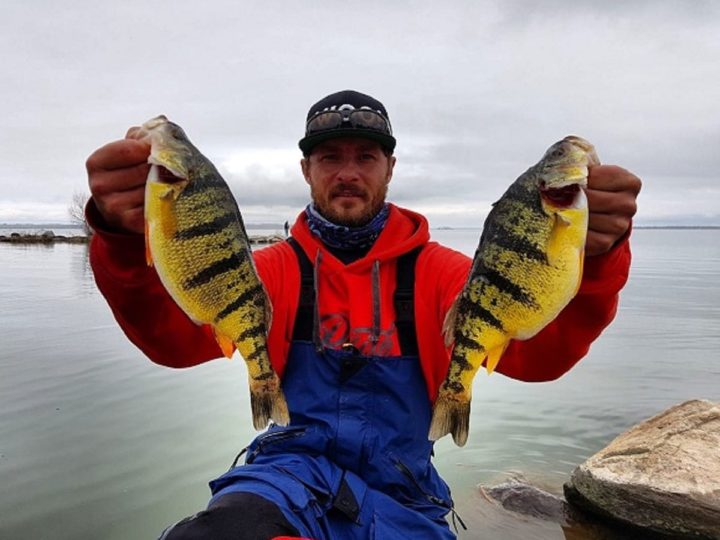 The yellow perch is one of the most abundant and popular gamefish in North America. As the female’s egg production already starts during early fall, many anglers are wondering when exactly the perch are spawning.

Perch are spring spawners that lay and fertilize their eggs between early April and late May in water temperatures between 45 and 58F. They can spawn in both shallow lake areas and low current tributaries.

Read on to find out all the details about the perch’s spawning behavior and whether or not they can be caught during their spawning season.

What Time of Year Do Perch Spawn?

The yellow perch (Perca flavescens) is an iteroparous fish species, spawning continuously throughout its life, once a year during springtime.

For instance, in Canada and the northern United States, the colder climate of these regions often results in a later spawning period between late April and mid-May.

In years with exceptionally cold winters and springs, the perch can sometimes spawn as late as early June. However, such late perch runs are pretty exceptional.

On the contrary, perch found in the midwestern parts of the US will often spawn in early or mid-April.

It all depends on water temperature and how fast any given water body can warm up during the spring.

PRO TIP: As a rule of thumb that is surprisingly accurate in many waters, you can say that perch will start spawning as soon as the walleye are done with their spawning.

What Time of Day Do Perch Spawn?

Most perch populations will spawn during the night and the early hours of the morning.

For one thing, water temperatures are usually lower during the dark hours of the day, giving the perch more oxygen and energy during the act of spawning.

Additionally, they most likely use the cover of darkness to stay off the radar of nearby predators, which will often surround the perch’s spawning ground in hopes of a quick and easy meal.

What Water Temperature Do Perch Spawn at?

As soon as the water hits a temperature around 45F, the perch will gather in larger schools and begin the act of spawning.

However, depending on certain factors, the fish might not start spawning immediately once that water temperature is reached.

These factors, which often delay the spawning of the perch, can include:

Nonetheless, the fish cannot wait forever to commence with the spawning, as their eggs need the spring’s moderate water temperatures and the connected higher levels of oxygen in the water to survive.

And so, perch generally do not spawn if water temperatures are around 58F or above.

RELATED ARTICLE: Find out everything there is to know about the perch by reading this complete species guide

How Do Perch Spawn?

As freshwater fish, perch are oviparous, meaning that their eggs are fertilized externally.

Perch fish do not build reds or nests for their eggs but will lay them in a long, gelatinous strand that can be up to 7 feet long.

This is a unique feature among the freshwater fish species of North America.

Once the strand is attached to the nearby vegetation, the male will swim over it and fertilize the eggs with its milt.

Depending on water temperature, oxygen levels, and other abiotic factors, the eggs will commonly hatch after 11 to 25 days.

How Many Eggs Do Perch Lay?

According to a research paper, a fully grown yellow perch will, on average, lay around 23,000 eggs.

The female’s egg production can already start in late summer or early fall, and with every passing month, the fish’s belly will get rounder and rounder.

That’s why many anglers who are new to the sport can often get confused about the actual time of spawning of the perch.

Do Perch Spawn in Lakes or Rivers?

As perch live in both lakes and rivers, they can hence spawn in both types of habitats.

In smaller lakes, they will most commonly spawn in nearshore areas with rich vegetation in the form of weeds, reeds, water lilies, macrophytes (aquatic plants), or submerged brush.

In both river and larger lake systems, such as the Great Lakes, the perch will instead seek out smaller, low-current tributaries to spawn in.

As they attach their egg strands onto vegetation, they must avoid deep and fast-current areas without vegetation.

However, in an intriguing research paper on the spawning behaviors of yellow perch in Lake Michigan, it is stated that some perch populations in the southwestern areas of the lake tend to use entirely different spawning grounds.

As there are few smaller tributaries found in this area of the lake system, the perch would often prefer nearshore areas with cobble substrate to spawn in.

Most likely, the absence of both low-current tributaries and vegetation in the area has forced the perch to find other features and substrates that can hold their egg strands. Nature always finds a way, doesn’t it!

What Depth Do Perch Spawn at?

Perch prefer to spawn in shallower water of between 3 and 10 feet with an optimal water depth of 6 feet.

As both UV light and levels of dissolved oxygen seem to play a vital role in the perch hatchling’s survival, a depth of around 6 feet is ideal, as there will be enough UV light that can reach the eggs.

A water depth like that will also hold sufficient oxygen, as it will not warm up too much during the daytime.

Do Perch Bite During the Spawning Season?

Yellow perch can be caught both before, during, and after spawning.

These are fish that will not stop feeding during their period of spawning, and as the perch run tends to last several weeks, your chances of hooking up to a really fat pre-spawn perch mama can be considered reasonably good!

If you want to taste a real delicacy, you have to try fried perch eggs! They’ve got a particular taste to them, and they go well together with butter and a slice of fresh bread! Yummy!

However, I also want to mention that it can be a good idea to release bigger pre-spawn females, especially in waters with a minor or decreasing perch population.

You may not fill your limit (or stomach), but you’ll make sure that there will still be perch in that water in the future. And that, my friends, is worth so much more!

So if you want to practice sustainable catch and release fishing, keep the smaller females and throw back all the bigger ones you catch. Future perch generations will thank you!

RELATED ARTICLE: What Are the Favorite Baits and Natural Foods of Perch?

Can Perch Spawn in Ponds?

Just as they do in smaller lake systems, perch can spawn and reproduce in smaller closed ponds as well.

In such habitats, they also tend to seek out the nearshore areas rich in vegetation and attach their egg strands to them.

Perch that live in ponds will generally spawn much earlier than in lakes or rivers, as these smaller water bodies are almost always relatively shallow and warm up much faster.

Can Perch Spawn Under the Ice?

As their eggs need moderate water temperatures, vegetation, and UV light to survive, yellow perch do not spawn while an ice sheet still covers the water they inhabit.

Crappie Fishing in Clear Water (Best Lures and Colors)
← Previous
What Is the Best Ice Fishing Line for Lake Trout? (A Helpful Guide)
Next →