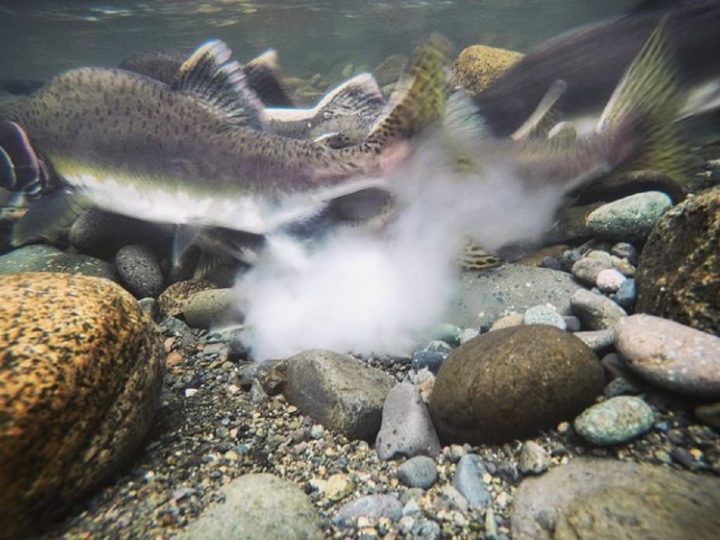 Many people know that salmon spend most of their adult lives in the ocean and that they swim upriver to spawn in freshwater. But when exactly do salmon spawn once they have entered a river system?

Most salmon start to swim upriver during late spring and summer but won’t spawn before fall or early winter. The exact time of spawning depends on factors such as water temperature, oxygen level, type of habitat, and type of salmon.

Keep reading this article to find out when each of the six different salmon species is spawning, how they are spawning, and why they return to their birthplaces to reproduce.

PRO TIP: Do you want to read up on all of the 70 trout and salmon species and subspecies that are found in North America? Then you should take a look at this awesome species guide on Amazon!

What Time of Year Do Salmon Spawn?

Most salmon species will spawn between September and December but can have started their migration from saltwater to freshwater already in late spring or early summer.

This means that many salmon spend a considerable time in freshwater environments before the actual spawning takes place.

Theoretically, a stock of salmon could enter a river system as early as March and spawn as late as December, meaning that the fish will dwell in the river for almost an entire year.

Of course, the amount of time spent in the river, as well as the exact time of the salmon’s reproduction period differs from species to species and habitat to habitat.

Salmon need water temperatures between 40 and 55F to lay their eggs, which is why most salmon will wait until fall or early winter before they commence with their spawning.

Warmer temperatures can have negative effects on their immune system (causing diseases) and their metabolism, as they have to burn essential energy at a much faster rate.

That’s why global warming, and the resulting increase in many rivers’ water temperatures over the last decade, is a topic of concern for both scientists and many salmon fishermen.

In order for their eggs to hatch and for the juvenile fish to survive in the rivers, the water must contain a high level of dissolved oxygen (DO).

And as higher levels of oxygen are linked to cooler water temperatures, this is yet another reason for the salmon to hold of on their spawning.

Additionally, the migrating adult salmon also need the water to be well oxygenated, in order to maintain their energy while swimming upstream against an often very strong current.

Salmon need gravel beds to spawn in. Such a feature isn’t always easy to find and can be located very far up a river or stream.

The spawning can be delayed by days or even weeks if the salmon’s spawning grounds are in the upper reaches of the water system and/or if the fish encounter obstacles on their way upstream.

Over time, the six main salmon species have evolved differently and developed their own migratory and reproductive patterns and preferences (which, of course, lead back to the three factors mentioned above)

Here is an overview of the spawning seasons for all six major types of salmon (Pacific and Atlantic):

As you can see, most salmon will spawn sometime between September and December, but both sockeye and pink salmon can spawn as early as July or August if the conditions allow for it.

One extreme example is Alaska. Here, summers can be both very short and fairly cold, which, in some years, can cause sockeye salmon to spawn as early as June.

It is this combination of the species’ genetic coding and the above-mentioned external factors that dictated the salmon’s time of spawning.

Where Do Salmon Spawn?

It’s not enough for the salmon to just swim upstream and lay their eggs behind the first best stone or weed bed. They actively seek out specific spawning grounds in the form of gravel beds to lay their eggs in.

The small spaces between the gravel both offer protection for the salmon’s small eggs and allow them to be well oxygenated, as the river’s current flows over the gravel beds unhinderedly.

These gravel beds are almost always located in shallower stretches of a river or stream, as the current here isn’t strong enough to wash away the eggs and the shallow water offers additional protection from larger predators.

Quite fascinatingly, the salmon will find their way back to the very gravel bed that they once hatched on. They do so by using both scent and the earth’s magnetic field to find both the river and the exact gravel bed they came from.

PRO TIP: If you are interested in fishing for salmon in the Great Lakes region, make sure to check out this super helpful guide on Amazon!

Why Do Salmon Return to Their Birthplace to Spawn?

There are several reasons for salmon to return to the rivers they were born in, to create new life. Most importantly, the salmon “know” that this habitat is suitable for spawning, as they have once hatched here successfully themselves.

Why find a completely new river system if the one the salmon are familiar with has everything they need to spawn?

Returning to their place of origin also means that there will be plenty of mates of the same species to spawn with, which ensures that the respective salmon stock’s genetic code will be continued as well.

How Do Salmon Spawn?

Once the fish have found their respective gravel beds, the female salmon start to dig small holes into the gravel beds, using their strong tail fin.

These holes function as nests for the eggs and are commonly referred to as redds. Once the female is done digging a couple of those reds, it will lay its eggs into them.

This is then followed by the male swimming over the redds and fertilizing the eggs with its milt.

Once the male is done with its part, the female will return to the redds and completely cover them with gravel, like a protective lock.

Over the next few days, the female may create several more redds that she digs in an upstream line.

How Many Eggs Do Salmon Lay?

Unfortunately, very few of these eggs will survive to full maturity. Studies suggest that, on average, only up to 3 eggs per female parent salmon hatch.

Many influences can cause such a high mortality rate:

Additionally, weather and water factors can also play a role in this regard:

As you can see, the odds are clearly against the tiny new salmon, but some make it nevertheless! Those can only be called hardcore survivors!

Can Salmon Spawn More than Once?

As basically all of the Pacific types of salmon die after spawning, only the Atlantic salmon can manage to spawn more than one time.

Not all Atlantic salmon die after spawning and the ones that do make it can return to the ocean and come back to the river the following year.

It is suggested that some stocks include specimens that have managed to spawn a total of three times.

However, this seems to be an extreme exception, and most Atlantic salmon that survive their first salmon run will only spawn one more time after that.

RELATED ARTICLE: If you want to learn more about the salmon’s life cycle and why most of them die shortly after spawning, make sure to also read this article!

Can Salmon Spawn in Saltwater?

Almost all species of salmon need freshwater to spawn in. One interesting exception here is the pink salmon, which occasionally spawns directly in the ocean, avoiding freshwater altogether.

If I’d have to guess, I’d say it’s because of the deep shape of the male pink salmon, which can at times make it difficult to enter smaller rivers or streams if their water levels are too low.

When that is the case, the pink salmon will simply use the coastal areas of the sea as its spawning ground and often reproduce successfully even in such unfavorable conditions.