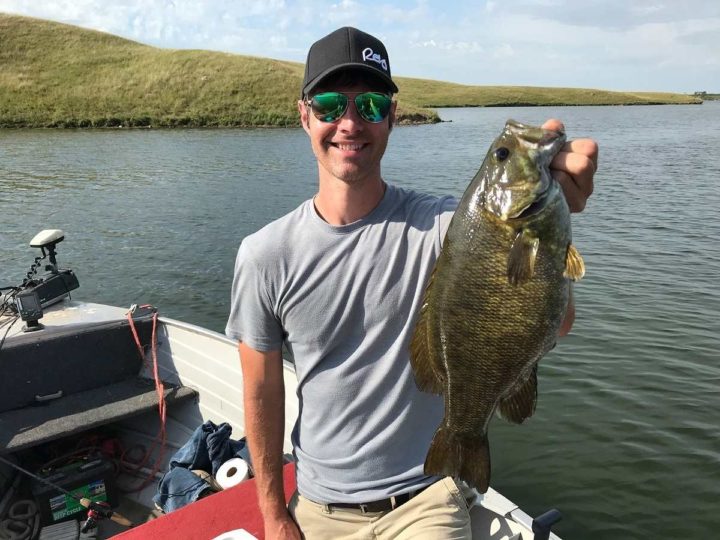 Fishing for smallmouth bass during the spawn can be extremely challenging but also very exciting and rewarding if you know when and where to target them.

Knowing as much as you can about the smallmouth bass spawn is crucial if you want to both locate and catch smallies during that time of year!

Smallmouth bass typically spawn between late April and early July in water temperatures between 55 and 65F. Fishing during the pre-spawn period, when water temperatures are in the upper 40s and lower 50s, is considered highly productive by most bass anglers.

Read on to learn everything there is to know about the spawning behavior of the smallmouth bass and find out how to fish for pre-spawn smallies.

PRO TIP: In need of new bass fishing gear? Then check out this awesome rod and reel combo on Amazon.

It’s decently priced, very durable, and will catch you plenty of trophy smallmouths!

What Time of Year Do Smallmouth Bass Spawn?

Smallmouth bass (Micropterus dolomieu) will spawn during late spring and early summer, which, in most waters, will be sometime between late April and early July.

Of course, the exact time of the spawn in any given water will depend on both water temperature and location.

The further north a lake or river is located, the later the smallmouth bass that inhabits it will spawn.

Consequently, they will spawn earlier in waters located further down south, where the climate is warmer, and water temperatures will rise more quickly than up north.

The following table will give you a general idea of when and where the smallmouth bass will spawn:

However, keep in mind that these are merely general dates that can and often will vary from year to year (especially in the age of climate change and somewhat more unpredictable weather patterns).

At What Water Temperature Do Smallmouth Bass Spawn?

Smallmouth bass need warmer water to spawn in and typically commence with the spawning activity in water temperatures between 55 and 65F.

As mentioned above, the combination of the smallmouth’s range and the respective habitat’s water temperature will determine the time of spawning.

Naturally, a pond or lake in southern Quebec will reach a water temperature of 55F much later in the year than a water of similar size and depth down south in Tennessee.

It is also noteworthy that the temperature window for the smallmouth’s spawn is really not that big, and the range between 55 and 65F is somewhat maximized.

The smallmouth bass’ eggs and fry are highly susceptible to too low and high water temperatures.

Studies have shown that both extremes can significantly increase egg and fry mortality, so the bass are forced to spawn within that fairly limited time frame during which the water temperatures are just right.

What Depth Do Smallmouth Bass Spawn at?

Smallmouth bass typically spawn in water depths of between 3 and 15 feet and prefer gravel, pebble, or sandy flats that are clear of silt or other debris.

If the water you’re fishing in has pea gravel and you can locate near-shore areas with that type of bottom, you’re golden.

Smallies love to build their nests in pea gravel coves or flats!

During the pre-spawn period, they hang out in the deeper water off their spawning areas until the water temperature is in the mid-50s.

They’ll move to the shallower flats and commence with the spawning once the water reaches the right temperature, and when that happens, catching them can become a very challenging task!

Can You Catch Smallmouth Bass During the Spawning Season?

While fishing for spawning smallmouth bass can be super challenging and frustrating, targeting pre-spawn smallies can be highly rewarding if you know where to find them.

No matter what species you target, it’s basically always the same story; when they’re spawning, it’s game over for us anglers!

And why not, right! I mean, it’s kind of expected that they don’t focus on feeding when they spawn. They are simply otherwise occupied!

But as impossible as it can seem to catch spawning smallies (even though some dedicated anglers still manage to do so at times), as effective and sometimes even easy it can be to catch them before and after the spawn!

That has two main reasons:

Go for flashy and noisy baits that will get the bass’ attention and irritate them.

Bride colors, such as yellow, orange, chartreuse, or white, can work very well and will be seen as a threat to the bed or nest.

As for baits, you can use a wide variety of them. The following bait types tend to produce a ton of smallmouth bass during the spawning season (you can check them out more closely on Amazon):

When it comes to soft baits (swim or creature), the following rigs have proven most effective for pre-spawn smallmouth bass:

These rigs will allow you to make slow, precise presentations to get those fish to react to your bait!

PRO TIP: Wear polarized sunglasses when fishing in clear water. They’ll help you spot the fish and make better bait presentations! You can find a pair of great fishing sunglasses on Amazon here.

Again, what you will want to do is to drop your bait on top of a smallie’s head! Lure and irritate them consistently, and you’ll be sure to hook up to some hard-fighting smallies!

How Do Smallmouth Bass Spawn?

The male smallmouth bass will sweep out a nest site in the substrate (often gravel, pabble, or sand) using their caudal fin.

Smallmouth bass nests typically have a diameter of about 1 foot, and the male will guard it both before and after the act of spawning.

Once a nest is built, and the females enter the spawning area, the males will start courting them.

If a female gives in to a male’s courtship, it will deposit some or all of its eggs into the male’s prepared nest.

This is followed by the male excreting its milt onto the deposited eggs.

The males stay behind to guard the eggs and, later on, the fry for a few weeks until the young manage to survive independently.

This sole parental care of the offspring by the male smallmouth bass is quite a unique phenomenon in the world of fish, and I find it extremely fascinating!

How Long Does the Smallmouth Bass Spawn Last?

Under normal circumstances, the smallmouth bass spawn will last between 1 and 2 weeks in most waters in the US and Canada.

However, if external conditions suddenly change, which will be explained in more detail further down in the article, and the fish get disturbed, the spawning can instead last up to 3 or 4 weeks.

How Many Eggs Do Smallmouth Bass Lay?

On average, female smallmouth bass will produce and carry 1,750 eggs.

Depending on the age and size of the female, it can produce anything between 1,500 and 2,000 eggs.

Smaller females typically produce smaller and hence more eggs, while bigger females will have larger and thus fewer eggs in them.

How Heavy Can Smallmouth Bass Do During the Spawning Season?

The eggs the female smallmouth bass carry will typically increase their weight by around 5 to 10%.

This isn’t that much compared to other fish species and is explained mainly by the smallmouth’s slender and muscular body shape.

Their bellies are simply not big and extendable enough to carry a larger amount of eggs in them.

For a 10lb smallie, the weight increase would be somewhat more significant, as a female of such size would be able to gain an additional 0.5 to 1lb.

Do Smallmouth Bass Spawn More Than Once a Year?

Usually, smallmouth bass will only spawn once a year, but exceptions to this rule are not that uncommon and have been observed many times by researchers.

Smallies can, for example, pause their spawning activity if certain environmental conditions suddenly change during the act.

Such conditions can include:

The fish can already have released their eggs and milt if and when those changes occur and will simply resume their spawning activity once conditions have normalized again.

It has also been observed that male smallmouth bass sometimes spawn several times with different females.

It’s not like they have two spawning seasons, though. Not really! Instead, males will simply seize the day if several females are nearby.

If you’re looking for solid and reliable bass fishing gear, these tips might be useful for you.

A solid and popular allround spinning rod! This rod is lightweight, has great sensitivity, and phenomenal action. Fits both beginners and seasoned bass pros. A 6’6” or 7′ Medium rod is your best pick for smallies.

An affordable high-performance spinning reel that’s perfect for smallmouth bass. Pflueger spells high quality and awesome durability! Makes for a great bass combo together with Ugly Stick. A Size 30 or 35 is a solid pick for smallmouths!

One of the best braids available today. Zero stretch, great feel, and immense strength make this line the perfect pick for bass in both open and snaggy waters. Put on a 15 to 20lb test, and you’re good to go!

How Big Do Smallmouth Bass Get? (Interesting Fish Facts)
← Previous
How Big Do Crappie Get? (With Record Lengths and Weights)
Next →