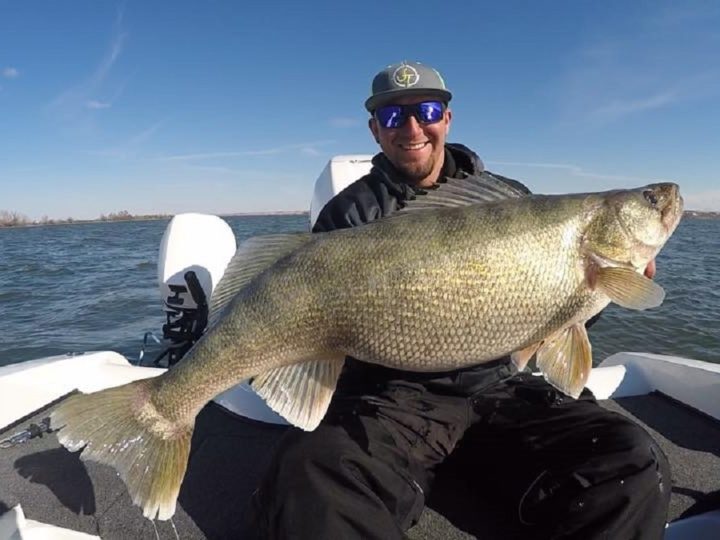 The walleye is one of America’s most popular game fish, and naturally, many anglers are curious about this predator’s spawning season.

I wanted to cover every possible aspect of the walleye spawn, so I researched and wrote an in-depth article on this interesting subject.

In both lakes and river systems, walleye generally spawn sometime during late March and mid-May, when water temperatures are between 40 and 50F. The time of the spawn depends on the walleye’s distribution. They will spawn during the night and only do so once a year.

Read on and find out everything there is to know about the walleye spawn, including how many eggs female walleye can lay, how much weight they put on, and how to catch them during the spawning season.

What Time of Year do Walleye Spawn?

Walleye (Sander vitreus) will generally spawn during spring, sometime between mid-March and mid-May.

Naturally, the populations found in the northern parts of the US and in Canada will spawn later than those found further down south.

And so, as this species has such an extensive distribution over the North American continent, there can be several weeks between the different spawning periods.

To illustrate this better, I went ahead and collected data for different states and regions all over the US so that you may know where the fish will spawn in your local waters:

Keep in mind that these are only general timelines that can and often vary from year to year, depending on how mild or cold the winter season will be.

But in years with more or less average winters for the respective regions, this is generally when you can expect the walleye to spawn.

At What Water Temperature Do Walleye Spawn?

Walleye will spawn in water temperatures above 40 and up to 50 degrees Fahrenheit.

As soon as the water temperature is nearing 40F, which is usually just after the ice has disappeared in the northern regions of the North American continent, the fish will gather in big schools and start their migration toward their spawning grounds.

As spring progresses, the water temperature will steadily increase, signaling that the spawn is about to start for the walleye.

Spawning activity will commence at a water temperature of about 44-46F and peak at around 50F.

What Time of Day Do Walleye Spawn?

As walleye are nocturnal predators, meaning that they are most active in low light conditions, and at night, they will also spawn during the dark hours of the day.

Their spawning activity generally stretches from dusk to dawn.

Where Do Walleye Usually Spawn?

Walleye either spawn in smaller lake or river tributaries or shallow lake areas with depths of 1 to 10 feet.

If they spawn directly in a lake, the shallows they tend to seek out are usually close to the shoreline and exposed to winds, as the moving water will cleanse the area from fine sediment that could harm the eggs.

Additionally, windswept water shallows will hold more oxygen, which is needed for the eggs to survive.

The preferred bottom features for spawning walleye include rock and gravel, as the eggs will have an easier time attaching themselves to such bottom structures.

Furthermore, the shallow areas the walleye will use for spawning in lakes will almost always be closely located to considerably deeper water.

Continue reading this article and find out why that is in the next section!

DID YOU KNOW: Walleye have a genetically based response to environmental cues and features that guides them to their suitable spawning habitats at the right time of year.

How Do Walleye Spawn?

Once male and female walleye are gathered and ready for the act of spawning, smaller groups of fish, consisting of a few males and one female, will come together and release their eggs and milt simultaneously in a series of wild, synchronized movements.

Those movements usually go upward in the water column, with the females leading the way and the males following her in an attempt to fertilize the eggs with their milt.

Natural selection, or perhaps just sheer luck, decides what genes get passed on to the next generation of walleye.

The smaller males arrive at the spawning ground much earlier than the bigger females, who prefer to remain in the deeper water adjacent to the shallows.

Here, they won’t be bothered by the many males and can bide their time until the water temperature is right and the actual spawning commences.

Additionally, the deeper water allows the walleye to disperse, should bigger predators, such as pike or musky, enter the scene, or if weather conditions make staying in the shallow water areas impossible.

Once the spawning act is completed and the female has laid all of her eggs, neither male nor female walleye will remain to guard the eggs.

Instead, the eggs are left to their fate. They will have to hatch and survive without any help or protection from their parents.

That’s why the choice of spawning location is so crucial to the walleye!

RELATED ARTICLE: How Big Do Walleye Really Get?

Do Walleye Build Nests for Their Eggs?

Walleye are broadcast spawners, which means that they will scatter their eggs across the bottom instead of building protective nests for them.

That is why they choose bottom features such as gravel or rocks so that the eggs can attach themselves to the structure or fall into crevices, where they will remain protected until they hatch.

Do Walleye Eat Their Young?

Walleye are a pretty cannibalistic fish species, and they won’t think twice about eating their offspring.

Their cannibalistic nature is one of the reasons for the female’s relatively high egg production, which you can read about further down in the article, so make sure to keep reading!

RELATED ARTICLE: Check out this in-depth article on what types of forage walleye eat and prefer!

How Many Eggs Do Walleye Lay?

As previously mentioned, female walleye can produce and store enormous amounts of eggs. On average, a female produces a staggering 27,000 eggs per pound.

Amazingly, that means that a trophy-sized walleye of over 10lb has the capacity to produce and store over half a million eggs in her body.

How Long Does the Walleye Spawn Last?

While the walleye’s pre-spawn period often lasts weeks or even months, the actual spawning period typically stretches over 2 to 3 weeks.

Pretty much all walleye in any given water body will have spawned out during that time.

The very act of spawning typically only lasts for a few hours. Females will spawn out entirely during the spawning season, while males can spawn and eject milt several times with different females.

Do Walleye Spawn More Than Once?

Like most freshwater fish species, walleye can only spawn once annually. They can and will do so only during the springtime.

DID YOU KNOW: During very harsh winters of the past, some northern-located walleye populations skipped their annual spawning due to too cold water temperatures during the spring.

Do Walleye Bite During the Spawn?

While fishing for pre and post-spawn walleye can be fantastic and rewarding, trying to get them to bite during the actual spawn can be tricky and sometimes even nearly impossible.

The weeks leading up to the walleye spawn are often well worth freeing up some of your time for, as the fish will still be in their feeding mode.

Once the water temperatures hit 45F or so, the fishing will become considerably more difficult, as the walleye will seize to feed during most hours of the day and start to concentrate on the upcoming spawn.

It’s not impossible, and, as you’ll read in the next section, there will still be smaller feeding windows, but you’ll have to time those short periods and bring a lot of patience and dedication with you to the water because it won’t be easy!

PRO TIP: If you manage to catch one of those big, fat females that are about to spawn, cosider releasing it. Future anglers and walleye generations will thank you!

On the contrary, post-spawn walleye will, once again, be much easier to catch. Now, the fish are done mating and will turn their attention back to the open water and feeding!

The post-spawn period is probably the easiest time of year to target walleye.

PLEASE NOTE: Many waters in the US and Canada have closed seasons for walleye that typically stretch from March to May. Make sure always to check your state’s fishing regulations and season dates before heading out!

What is the Best Time of Day to Catch Walleye During the Spawn Season?

There are usually two golden periods for walleye fishing; dawn and dusk.

This is especially accurate during the spawning season, as the fish, if they are already at it, will be busy mating during the night, or otherwise rest or patrol the spawning areas during the daytime.

However, those two windows in the morning and evening, particularly during the 30 to 60 minutes before and after sunset and sunrise, can be really action-filled ones!

Makes sure always to target walleye during these windows of opportunity. Those times of day will most likely help you catch more fish, spawning season or not.

Just remember that those windows will shrink the closer the spawning gets!

How Much Weight Do Walleye Gain During the Spawning Season?

There is not much research on this question, but plenty of reports from anglers who practice catch and release fishing and have caught, measured, and weighed the same fish pre and post-spawn.

Most of them have reported an additional weight of about 10 to 25% in pre-spawn fish, compared to egg-free post-spawn ones.

This would imply that a 5lb walleye could gain roughly 1/2 pound before the spawn.

A 10lb fish could gain 1 to 1 1/2lb, and a post-spawn behemoth of 15lb could gain close to 4lb before it spawns. Pretty impressive, isn’t it?

Where Do Walleye Go After They Have Spawned?

When the walleye are done spawning for the year, they will immediately return to deeper water. Here, the fish will feed excessively and slowly regain their energy.

So, if you don’t mind the lower weights, post-spawn walleye fishing can yield excellent results if you target the deeper areas of your lake or river!

How to Become a Fishing YouTuber? (With Expert Tips)
← Previous
What Do Muskie Eat? (Preferred Prey and Baits)
Next →