White Bass vs. White Perch (How to Tell Them Apart) 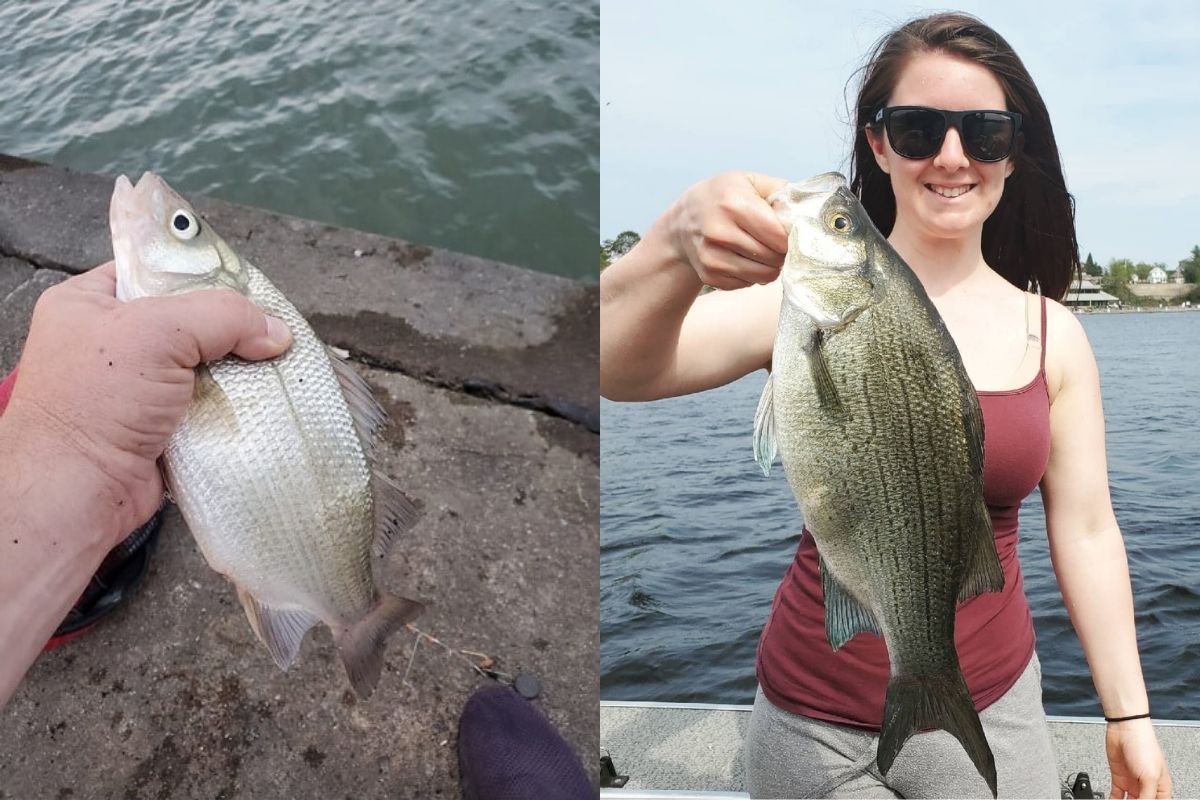 A lot of anglers have a hard time telling the difference between white bass and white perch. And as they look very similar, this doesn’t come as much of a surprise. So to help you identify your catch, I decided to write this helpful article on the interesting topic of white bass vs. white perch.

Despite many similarities, it is still possible to tell a white bass from a white perch. White bass will have several horizontal lines along their flanks, while white perch only have distinct lateral lines. White perch also weigh less than white bass, as their maximum weight is only 3lb.

If you want to know more ways of telling the difference between white bass and white perch, all you have to do is keep reading this article!

What Is the Difference Between White Bass and White Perch?

White bass (Morone chrysops), or silver bass, and white perch (Morone americana) are closely related. The white perch isn’t an actual perch but belongs to the broader bass family. Hence, both species are part of the Moronidae, the temperate basses.

That’s the reason for their close resemblance! Nonetheless, it is possible to tell them apart if you know where to look and what features to check.

One of the easiest ways of telling the two fish apart is by checking your catch’s flanks. If the fish has several horizontal, faint stripes or lines along both of its sides, you’ve caught yourself a white bass.

White perch completely lack this fairly distinct feature and either have no patterns at all along their flanks or faint, dark and often unevenly distributed spots or bars along the sides of their backs.

However, most white perch will have an apparent and distinct line along their sides; their lateral line. This feature will really stick out on most fish, making it much more straightforward to identify your catch.

Of course, white bass also have a lateral line, but theirs is most commonly very faint and barely visible due to the many other lines present along their flanks.

The difference in body size can also be a reliable indicator when trying to identify your catch. Of course, this only works with bigger fish!

So, even though there is a slight difference in their average sizes, we have to look at their maximum length and weight in order to be able to tell them apart.

The reported maximum length of white bass is 17.7 inches, and it can reach a maximum weight of just over 6lb. On the other hand, white perch have a maximum length of 15 inches but do not exceed a weight of about 3lb, making them both the shorter and the considerably lighter species of the two.

The so-called fin test is another reasonably sure way of telling the difference between white bass and white perch. All you have to do is pull up or lift your catch’s dorsal fin (the spiny one on its back).

On the contrary, the white bass’ dorsal fins are not connected and won’t erect simultaneously when lifting the first dorsal fin.

So, if both dorsal fins are erect at the same time, you know that you’ve caught a white perch!

How to Fish for White Bass?

Most white bass are caught on a light to medium-light spinning tackle that can include the following:

They are best fished during the spring season when they start to migrate up the rivers to spawn. Your lures should be presented relatively close to the bottom, which is where the white bass will hold up.

RELATED ARTICLE: CHeck out this article on all the differences between lake trout and splake.

How to Fish for White Perch?

Given their smaller size, white perch demand light to ultra-light spinning tackle that can include the following:

Many anglers also use slip bobber rigs with smaller live baits to catch them. These live baits for white perch are:

White perch usually hunt in large schools and will often go for your lures or baits quite aggressively due to the overwhelming competition of the school.

This means that once you have found the white perch, you can expect to get a lot of action, as the bites can be plentiful.

RELATED ARTICLE: Check out this interesting article on all the differences between yellow and white perch

What Is the Biggest White Bass Ever Caught?

There is not just one, but two world record white bass that share the exact same weight of 6lb 13oz. One of them was caught back in 1989 in Lake Orange (Virginia) by angler Ronald Sprouse.

The other one was caught 21 years later, in 2010, in the Amite River (Louisiana) by an angler called Corey Crochet.

What Is the Biggest White Perch Ever Caught?

The world’s biggest white perch was caught in 2016 by angler Val Percuoco, who was fishing the Wachusett Reservoir (Massachusetts) and got lucky enough to land an actual trophy fish.

His white perch weighed an incredible 3lb 8oz, which is a huge specimen, considering the average size of this species!

Carp Fishing in Sweden (An Expert Guide)
← Previous
Where to Buy a Fishing License Online? (A State-By-State Guide)
Next →
Click here to cancel reply.