White Crappie vs. Black Crappie (How to Identify Them) 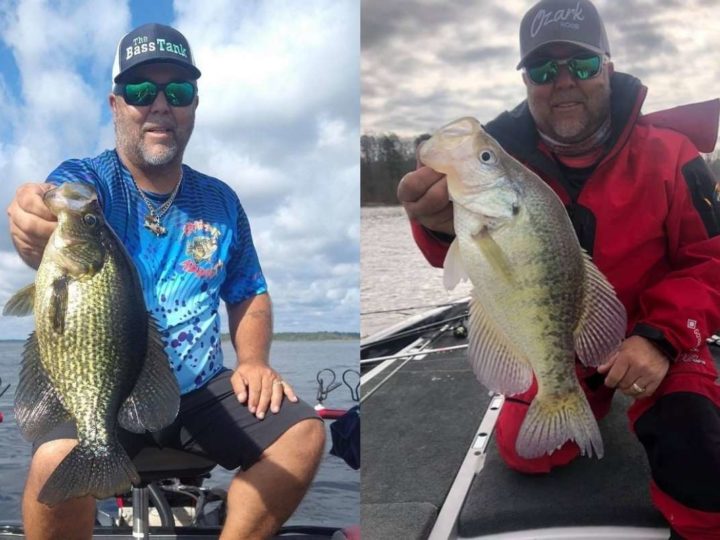 If you are new to crappie fishing, telling black and white crappie apart can be quite the challenge. There are a few distinct visual differences between the two, but you have to know what you are looking for if you want to identify your catch accurately.

Black crappie generally have a dark body covered with irregular dark or black spots, while white crappie most commonly have a lighter body with regular dark bars running down their flanks.

Keep reading this article if you want to know more ways of telling the difference between black and white crappie.

DISCLAIMER: All images and tips on how to identify crappie were provided by pro staffer and crappie expert Brian Harford.

What Is the Difference Between White Crappie and Black Crappie?

If you go by their names, you’d think that it should be pretty easy to tell them apart, but don’t be fooled because the visual differences between black and white crappie are anything but obvious!

As you will find out, some of their features can also alter between different types of environments, making it even more difficult to tell them apart accurately.

That’s why, if you’re unsure about your catch, checking the fish’s markings and dorsal fin will most likely help you figure out if the fish you’ve caught is a black or white crappie.

In many waters, black crappie will have dark-colored backs and flanks. Their markings are randomly scattered dark or black spots that cover both body and fins.

On the other hand, white crappie often have a much lighter appearance in the form of olive-green backs and silvery to yellowish or whitish sides.

They have very distinct body markings in the form of 5 to 10 vertical dark or black bars along their flanks.

What’s very important to remember here is that the crappie’s body coloration, no matter if their black or white crappie, can vary in any given water body!

Black crappie can be very light in color, and white crappie can have a very dark body coloration, depending on water clarity, amount of underwater vegetation, and overall sunlight intensity that the water is exposed to.

So, even though black and white crappie get their names from their distinct body colorations, color is not always a factor you can count on!

That’s why you should always check for the markings instead, because no matter the color, those spots (black crappie) or vertical bars (white crappie) will always be there!

The second safest way of telling black and white crappie apart is by checking the number of spines on their dorsal fins, as it slightly differs between the two species.

Additionally, the dorsal fin of the white crappie is located a little closer to the tail fin than that of the black crappie. But you do need a keen eye to spot that difference.

Keep to counting the spines, and you’ll be on the safe side!

Now we move on to the lesser apparent visual features of black and white crappie. But if checking their markings and spines doesn’t cut it for you, they can nonetheless help you to identify your catch. If you look close enough, that is!

The body shape of the black crappie differs slightly from that of the white crappie.

Black crappie will have a more compact and round body, while white crappie tend to be longer and not as deep.

But again, the fish’s body shape is not always set in stone, as different external factors, such as food availability and predation, can alter the shape of the crappie in any given water body!

This last feature is the subtlest one of them all and is not always relevant when trying to tell the difference between black and white crappie.

Much like their different body colorations, the crappie’s tail fin is often either dark (black crappie) or light (white crappie).

But, of course, that’s only the case if the rest of the fish’s body is colored in a similar fashion. And as you could read further up in the article, that’s not always the case!

I repeat myself when I suggest to you that the best ways of telling white crappie from black crappie are by checking their body markings and by counting the number of spines on the dorsal fin.

But if you’ve never caught crappie before, those really are the easiest features to check!

Are Black and White Crappie the Same Species?

Their closely related genetic codes and the fact that they are commonly found in the same types of habitats, such as ponds, lakes, reservoirs, streams, and slow-moving rivers, explain why they tend to be so difficult to tell apart.

Where Do You Find Black and White Crappie?

Both crappie species tend to seek out structures, and that should always be the first feature to target when trying to catch them.

But while they can often be found around the same structure, it can be good to know that black crappie like to dig into it, while white crappie tend to be found above it.

Of course, that’s not always the case, but it appears that white crappie prefer somewhat deeper and more open water spaces, while black crappie like to stay shallower and as much hidden as possible.

That’s also why you will generally catch white crappie in deeper water, for example, when trolling with jigs during summertime.

Do Black and White Crappie Spawn at the Same Time?

While both black and white crappie will spawn somewhere between March and May, anglers have observed that black crappie tend to spawn somewhat earlier in many waters.

My guess is that this has to do with them preferring shallower water, which hence warms up faster during springtime.

On the other hand, some anglers have also reported that they have spotted spawning black and white crappie over the same flats.

So, once again, the behavior of the fish will vary from water to water.

Can White and Black Crappie Crossbreed?

Hybridization between black and white crappie can and does occur in many lakes all over the US.

Going back to the before-mentioned mutual spawning over the same flats, most likely, the reason for crappie to hybridize is due to limited spawning habitats, e.g., in very small water bodies, such as ponds or dams.

And if you think that telling black and white crappie apart is complex, then you haven’t seen anything yet! Because those crappie hybrids will look even more confusing.

They will have features of both of their parents, including a mixed body coloration, a varying number of dorsal fin spines, and, you guessed it, both black irregular spots and vertical bars.

If you happen to catch such a specimen and find yourself unable to identify it, I think the best thing to do is move on to the next fish!

How Big Is the Biggest White Crappie Ever Caught?

The world record white crappie is an ancient catch that no one seems to be able to beat.

The fish was caught in 1957 in Enid Dam (Mississippi) by angler Fred Bright and weighed in at an unbelievable 5lb 3oz, which is enormous for crappie!

What Is the Biggest Black Crappie Ever Caught?

As previously stated, black crappie can weigh somewhat more than white crappie due to their rounder and more compact body shape.

And so, the world record black crappie beats the white crappie record with 4oz; 5lb 7oz.

Unlike the white crappie record, this catch was made relatively recently, namely back in 2018, and it’s more than possible that the pond it was caught in holds even bigger slabs!

Do White and Black Crappie Taste the Same?

As black and white crappie are most often found in the same water bodies and pretty much feed on the same types of forage, most anglers will tell you that there is virtually no difference in taste between the two fish species.

With that said, crappie, in general, are considered excellent table fare. In fact, they are often referred to as North America’s most delicious panfish and enjoyed by millions and millions of anglers all across the country.

Crappie have very tender white meat that, if prepared correctly, will melt in your mouth! The meat’s flavor is most commonly described as mildly fishy, which is probably why it enjoys such high popularity!

How Far Do Salmon Migrate? (Learn About the Salmon Run)
← Previous
When Do Crappie Spawn? (Temperatures, Times, and Locations)
Next →