White Perch vs. Yellow Perch (How Are They Different?) 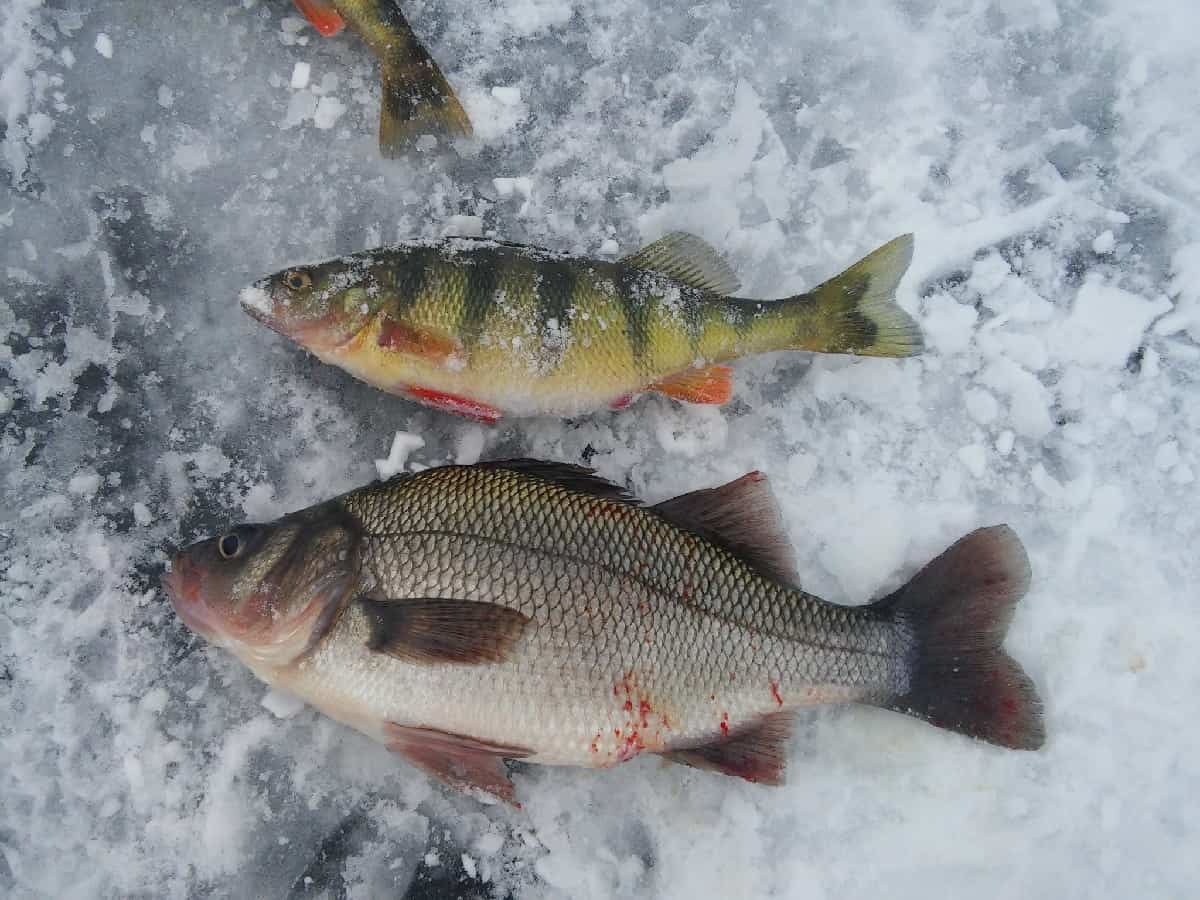 Plenty of anglers fish for both white and yellow perch without actually knowing that they are catching two completely different species. As the topic white perch vs yellow perch is a very interesting one, I wanted to find out more and write an article about those two panfish.

Yellow perch are actual members of the perch family Percidae. White perch are no perch at all, but a species belonging to the wider bass family Moroniadae. While the two fish have roughly the same length and weight, they differ in body coloration.

If you want to know about all the major differences between white and yellow perch, all you have to do is keep reading.

Pro Tip: If you want to read up on the best fishing methods for panfish species, such as perch, check out this helpful in-depth guide on Amazon.

What Is the Difference Between White Perch and Yellow Perch?

The most profound difference between yellow and white perch is their very species. Despite the fact that both are called perch, the white perch is actually no perch at all but belongs to the wider bass family.

The white perch (Morone americana) is hence a member of the temperate bass family Moronidae. This is why it is often confused with the striper, or striped bass, which is a fish of similar appearance belonging to the same bass family.

The yellow perch (Perca flavescens), on the other hand, is a true perch of the family Percidae. It is closely related to the very similar-looking European perch, as well as to the walleye.

As the names so aptly and obviously suggest, white perch are most commonly of a whitish color and yellow perch of a yellowish or golden one.

The white perch has a silvery-white body coloration, with a darker back and a much lighter ventral area of the body.

It has a highly visible lateral line that separates the upper and the lower part of the body quite distinctly. Additionally, it has smaller dark or black vertical and/or triangular bars that cover the upper part of its flanks.

The yellow perch is colored completely differently, as the upper part of the body is colored olive, or dark green, while its lower part is yellow, golden, or whitish in color.

Both of the yellow perch’s flanks are also covered by 6-8 black very distinct vertical bars, which is a common signature of the Percidae family.

Both white and yellow perch basically occur in the same regions of North America. However, there are slight differences in their distribution as well!

The white perch can be found from Lake Ontario and St. Lawrence River in the North to Pee Dee River in South Carolina. Eastward, it goes as far as Nova Scotia. Here, they occur in both brackish, coastal, and pure freshwater areas.

Additionally, they can be found in the lower Great Lakes, The Hudson and Mohawk River, as well as in Delaware Bay and Chesapeake Bay.

Yellow perch are most commonly found in the coastal areas of both the Arctic and Atlantic oceans, as well as the Great Lakes- St. Lawrence River and the Mississippi River basins.

In Canada, it is found from Nova Scotia and Quebec to the Mackenzie River, as well as all the way to the Great Slave Lake in the Northwest and Alberta in the West. In the US, the yellow perch can be found as far south as Ohio and Illinois.

Both white and yellow perch are very similar in both body length and weight.

The yellow perch, on the other hand, has an average length of 4-10 inches and weighs about 8-12oz. Trophy yellow perch can reach a length of 12-15 inches and a weight of just over 3lb, making it the somewhat smaller species of the two.

RELATED ARTICLE: Make sure to also check out this article if you want to learn about all the differences between pike and pickerel

How to Fish for Yellow Perch?

One of the most popular ways of fishing for yellow perch is through the ice, using small jigs and spoons on super light and fine-tuned jigging rods.

Another popular method is bobber fishing with smaller live baits, which can include the following:

RELATED ARTICLE: Check out this article if you want to rea dup on all the differences between yellow perch and European perch!

How do You Catch White Perch?

Most commonly, white perch is fished for by using smaller bobber rigged live baits. These often include the following:

Many anglers find minnows to be the absolute best choice of bait for white perch, especially during the early season.

They are also caught on ultralight spinning rods and lures, such as:

Pro Tip: When lure fishing for white perch, try to go for lures that make some noise or give off vibrations underwater, as well as lures that can be retrieved fast.

What Is the Biggest Yellow Perch Ever Caught?

The world record yellow perch is an ancient catch that seems to last for all eternity! It was caught back in 1865 in a lake in Bordentown, New Jersey by an angler called Dr. C. Abbot and weighed in at an impressive 4lb 3oz.

A yellow perch of more than 4lb is without a doubt a really big catch and such fish are extremely rare. The big question is if there’ll ever be caught a bigger one!

What Is the Biggest White Perch Ever Caught?

The old world record white perch was a fish of 3lb 1oz that was caught by New Jersey angler Edward Tango in 1989 and lasted almost three decades, before getting broken by an even bigger fish.

The current world record is a white perch of 3lb 8oz that was caught on the Wachusett Reservoir in Massachusetts by Val Percuoco in 2016. This is a really tough weight to beat and hence, this new record is bound to last for a very long time as well!

Is Yellow Perch Good to Eat?

Plenty of anglers who fish for yellow perch take their catches home and eat them, as this fish species makes for a very tasty meal.

In fact, this panfish is actually considered one of the most delicious fish in North America.

The most common ways of preparing yellow perch for the dinner plate include:

RELATED ARTICLE: What Do Yellow Perch Like to Eat?

Is White Perch a Good Fish to Eat?

According to many anglers, white fish is a superb eating fish that can be prepared and enjoyed in various ways.

It is especially known for its white, tender meat, which makes for an excellent meal if the fish is kept, cleaned, and cooked properly.

The best way of preparing white perch is to skin and fillet it, before cooking, pan-frying, or deep-frying the fillets or smaller chunks of meat.

Pro Tip: Make sure to remove the fish’s blood-filled lateral line, as this will improve the meat’s taste considerably.

Best Time of Day for Pike Fishing (All Four Seasons)
← Previous
What Is the Best Weather for Perch Fishing?
Next →
Click here to cancel reply.