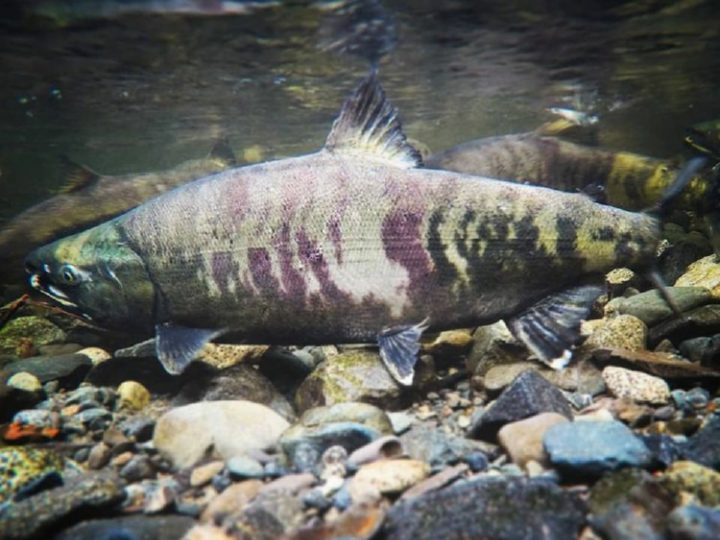 Every year, millions of salmon leave the sea to swim up their natal rivers. Many of them cover great distances during their freshwater journey and almost all of them die of exhaustion after the spawning has commenced. But why do salmon swim upstream?

Salmon enter fast-flowing freshwater systems and swim up their natal rivers to find a suitable spawning location. The rivers’ running water and habitat provide both plenty of oxygen and shelter for the eggs and juvenile salmon, which increases their rate of survival.

Keep reading this article to find out why and how far salmon swim upstream, if they can be caught while swimming upstream, and why salmon jump in rivers.

PRO TIP: Did you know that North America is home to more than 70 types of trout and salmon? If you want to find out more about them, check out this complete and illustrated guide on Amazon.

Why Do Salmon Have to Swim Upstream?

All salmon are born in rivers or streams and all of them return to the same river or stream they were born in to give birth to a new generation of salmon. As they can locate their specific natal spawning grounds, they have to swim upstream to get there.

As many salmon stocks breed in vast river systems that can span dozens or even hundreds of miles, their journey upstream can be both very long and extremely demanding.

According to studies, salmon use both the earth’s magnetic field and their highly developed sense of smell to first find their natal river and then their respective spawning ground.

This amazing ability is evolution at its finest! The salmon never seem to swim up the wrong river and always know exactly how far upstream they have to go.

Now you might ask; but why don’t the salmon just lay their eggs close to the river mouth? It’s a question I’ve asked myself many times.

The answer is that river mouths usually aren’t suitable habitats for spawning, as they can contain murky water with lower oxygen levels, a certain percentage of saltwater, and are usually wide and open places that are perfect for predators.

On the contrary, the freshwater of the upper river systems that the salmon use to spawn in usually contains a lot of dissolved oxygen (DO), which is vital for both parents and eggs.

The migrating salmon need cool and well-oxygenated water simply to be able to make the entire journey upstream and once the eggs are laid (usually in gravel beds), their continued survival heavily depends on the presence of oxygen in the water.

Yet another reason for the salmon to swim high up the rivers is security. As mentioned above, the deeper and wider a stretch of river is, the easier it is for predators, such as bigger fish and birds, to access it.

The river stretches with gravel beds that salmon use to spawn in are usually extremely shallow, making it difficult, or outright impossible for larger predators to reach.

RELATED ARTICLE: Read this article and find out when the different salmon species are spawning

How Far Do Salmon Swim Upstream?

Salmon can swim hundreds or even thousands of miles to get to their spawning grounds. In fact, salmon have one of the longest migration patterns in the fish world.

Atlantic salmon in particular often cover vast distances to get to their home rivers. It is suggested that some stocks travel as far as 6000 miles through the ocean before entering the freshwater territory.

And it doesn’t end there; some Atlantic salmon stocks spawn in huge river systems that force them to swim up to 200 miles upstream before they finally arrive at their final destination (quite literally).

It’s no wonder that they die of exhaustion after they’re done spawning, is it!

RELATED ARTICLE: If you want to read up on the salmon’s life cycle and find out why they die shortly after spawning, make sure to also read this article!

How Long Does it Take Salmon to Swim Upstream?

On average, it takes salmon two to three weeks to make their way upstream and reach their spawning ground.

Of course, the amount of time highly depends on the river system the salmon migrate through. It can take more days if the fish encounter plenty of obstacles on their way up and fewer days if the river current is below average.

The length of the river and how far up the salmon’s spawning grounds are located also play a major role.

In smaller streams, the salmon may reach their destination in only a couple of days. On the contrary, really large river systems of several hundred miles naturally imply a longer migration for the fish.

For example, it takes an adult chinook 19 to 20 days to swim from Bonneville Dam all the way up to Idaho in average flow. That’s about 280 river miles that the fish are covering in just under 3 weeks. Pretty fast, if you ask me!

PRO TIP: You can check out the visual quick fact sheet of this article via the related salmon migration web story here!

How Far Can Salmon Swim Upstream in One Day?

If we take the example above, and given that the conditions are optimal, a salmon can cover about 14 river miles per day.

But, once again, factors such as flow strength, river depth, and possible obstacles along the way must be taken into consideration here as well!

In a river free of obstacles (such as dams, sunken trees, big stones, etc) and with a lower than average flow, a salmon might manage to swim 20 or more river miles upstream in one day.

On the other hand, if there are plenty of obstacles in the fish’s way and if the river is high and the current extreme, it might only manage to cover 10, or even fewer miles per day.

RELATED ARTICLE: What Is the Maximum Size of Chinook Salmon (And All the Other Salmon Types?)

Do Salmon Eat While Swimming Upstream?

During their way up the rivers, salmon reduce their feeding activity to a bare minimum and instead focus all of their attention on reaching those spawning grounds. If they eat while swimming upstream, it will only be sporadically and during very short periods.

As they burn through most of their energy during their migration upstream and their bodies start to deteriorate, food is naturally not of much importance to them anymore, as they are programmed to die after spawning.

However, they do go for the occasional fly on the surface or some aquatic insects or crustaceans if the opportunity presents itself and if it won’t distract the fish too much.

Whether or not this is due to actual hunger or a mere habit or reflex is not certain, but as the next section will explain, the reflex theory is probably the most likely one!

Can You Catch Salmon While They Swim Upstream?

While not being in much of a feeding mood, it is possible to catch salmon while they swim upstream in rivers. Many salmon are caught on dry and streamer flies during their journey up the rivers.

As the flies usually just pass them by fairly quickly, due to the fast current, I don’t believe they take them because they are hungry.

Instead, it’s more of a reflex linked to their predatory instincts. If they see an insect (your fly) passing by, they will simply open their mouths and inhale it, mostly out of sheer habit. At least in theory!

And while this doesn’t seem to be the biggest of challenges for an angler, it is just that! Because most of the time, the theory doesn’t hold up! What happens nine times out of ten, and I am talking from personal experience here, is that the salmon will actually not go for your fly and simply ignore it.

Or maybe it just passes by way too fast, so the salmon doesn’t even have time to notice it.

Either way, if you manage to actually catch a migrating salmon on your fly, you can consider yourself a very skilled, and lucky fisherman!

Trust me, it can be extremely frustrating to fish a river that’s full of salmon and virtually none of them show any interest whatsoever in that fly of yours. Until one finally does and the fight of a lifetime is on!

PRO TIP: One of the best flies for river salmon is the Wooly Bugger. This amazing streamer fly has caught thousands of big salmon and seems to work on most rivers in North America. Check it out more closely on Amazon here.

Why Do Salmon Jump in Rivers?

Salmon often jump in rivers to get over obstacles that would otherwise prevent them from continuing their journey upstream. Common obstacles and barriers include dams, waterfalls, and culverts.

Other obstacles that salmon may have to jump over include sunken trees, floating logs, and simply rapids.

How High Can Salmon Jump?

Atlantic salmon are thought to be the salmon species that can jump the highest.

Almost nothing can stop a migrating salmon from reaching its spawning destination!

How high salmon can jump out of the water depends on the water depth as the fish tend to dive down to get more momentum for their leap.

So, quite naturally, the deeper the water and the salmon’s dive, the higher their jump will be!

When Do Salmon Spawn? (Interesting Fish Facts)
← Previous
What Types of Salmon Are There? (A Complete Guide)
Next →