Ice Fishing on Lake Simcoe (Everything You Need to Know) 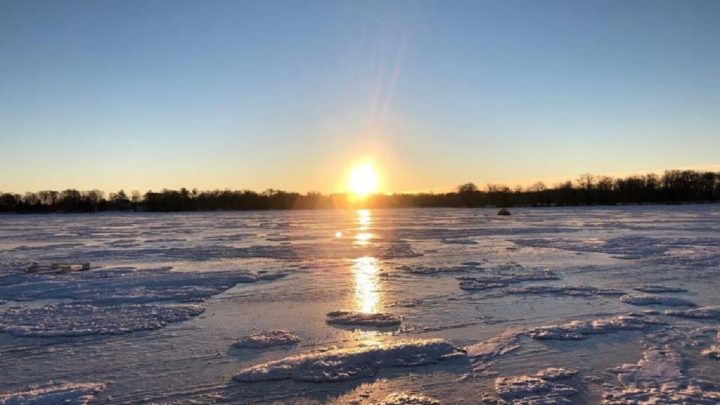 Without a doubt, Lake Simcoe is one of Canada’s very best ice fishing destinations. The lake offers fantastic opportunities and is home to plenty of exciting fish species. I wanted to learn more about Canada’s “ice fishing capital” and asked one of Simcoe’s top fishing guides for his best tips and advice.

Located 40 miles north of Toronto, Lake Simcoe can offer you a genuinely unique ice fishing experience. Besides being home to some of Canada’s largest yellow perch, it holds plenty of crappie, pike, lake trout, and whitefish.

This in-depth article contains everything you need to know about ice fishing on Lake Simcoe, including:

So if you want to find out more about this incredible lake and how to fish it, make sure to keep reading!

Where Can You Ice Fish on Lake Simcoe?

While you can catch fish practically anywhere on Lake Simcoe, certain areas produce more bites than others and are considered hotspots.

As this is an enormous water body with a considerable average depth of 40 to 50 feet, a maximum depth of 135 feet, a maximum length of 19 miles, and a maximum width of 16 miles, targeting these more frequented areas can be a smart idea, especially if you’ve never fished Simcoe.

The shallower hotspots of Lake Simcoe, down to an approximate depth of 30 feet, include Cook’s Bay, its southernmost bay, and Virginia Beach and Georgina Island in the southeastern parts of the lake.

Kempenfelt Bay, the lake’s westernmost bay that leads into the city of Barrie, and the vast and open main lake areas outside of Oro Beach, Parkside Beach, and Palm Beach along the northwestern shore are the deepwater hot spots of Lake Simcoe.

Here, you can fish depths that range between 30 and 130 feet.

Let’s move on to finding out what species you can catch in these hotspots, how to fish for them, and where to find them

What Fish Can You Catch Ice Fishing on Lake Simcoe?

Lake Simcoe is a vast lake and ecosystem that is home to more than 40 species of fish.
As I can’t include all of them in this article, I’ve settled on the lake’s six most popular target fish.

PRO TIP: In 2004, the invasive fish species round goby entered the lake system and populated the entire water body. It has since become an alternative food source for many of the lake’s predators, which explains why they grow to incredible sizes here!

If you think of Lake Simcoe, you will have to use the word jumbo! The lake holds one of the country’s largest yellow perch populations, and the fish in here can grow to an enormous size!

While their average size is about 1lb and 8-10 inches, the biggest of them can reach a weight of more than 2.5lb and a length of 16 inches or more. So, jumbo perch is not an understatement!

You can find Simcoe’s perch all over the lake. Some hotspots include Cook’s Bay near Keswick or Gilford, as well as Virginia Beach.

They are most commonly caught in depths of less than 30 feet. They love both live minnows, McGathy’s Slab Grabber jigs, Rapala Jing’n Raps, and Lindy Perch Talker jigs.

Crappie are incredibly abundant in Lake Simcoe, and with a bit of luck, you can catch plenty of them during one of their feeding frenzies.

They commonly have a length of about 6 to 10 inches and weigh between 0.5 and 1lb. Thanks to the lake’s outstanding water quality, the fish here have an excellent taste.

Ice fishing for crappie on Lake Simcoe is best done during the first and last ice.

You can find them over shallow weed flats, and they are best caught in low-light conditions and at night. Both crappie tubes and smaller live minnows have yielded great results through the ice.

A real hotspot for Simcoe crappie is Cook’s Bay near Keswick.

The lake’s northern pike can grow pretty big and are often very hungry. They tend to roam the same areas as the perch do, and so, if you’re jigging for perch, it’s not uncommon that a pike enters the scene and goes for your jig. Whenever that happens, you’re in for a real fight, as Simcoe pike are known for their incredible strength.

Most pike here have an average size of 5 to 10lb, but fish of more than 15lb and 30 inches have been reported!

If you want to target them, all you have to do is find the perch schools. Find them, and you’ll find the bigger predators!

You can catch a lot of pike on tip-ups baited with dead baits such as sardines or herring. Present them on a conventional quick-strike rig, and you’re good to go!

While not as popular, ice fishing for lake trout on Lake Simcoe can be gratifying, as the fish are plenty and well-grown. You can catch real monsters if you have the skills and patience, as Simcoe Lake is known for its trophy lakers!

While their average size is between 5 and 7lb, fish of 10 to 15lb aren’t that unusual, and a few giants of more than 20lb have been reported here!

You will have to fish deeper waters of 30 to 100 feet to find Simcoe’s lake trout. Some of the best areas to catch them in include Kempenfelt Bay and the main lake area between Parkside/Palm Beach and Georgina Island, which hold the deepest parts of the lake.

As the lake trout gorge on round goby, using lures and baits that imitate them is best to catch lakers on Lake Simcoe.

The Meegs jig and the Sebile Vibrato metal jig work exceptionally well on Lake Simcoe, as they closely resemble the round goby.

The whitefish is another popular ice fishing species that is pretty abundant in the lake.

It both tastes delicious and can reach a pretty decent size, which is why many anglers fish for them through the ice.

The average size of Simcoe whitefish is an incredible 3 to 6lb, which is enormous compared to other waters! It’s neither uncommon to catch fish of more than 10lb.

Whitefish prefer the deeper areas of the lake and can be found in the lake trout hotspots.

It’s best to target them very close to the bottom using smaller jigs like the Neo Hair Jig or the Badd Boyz Jig, which both catch a ton of whitefish every season!

Burbot is perhaps the least fished for species on Lake Simcoe, but one that real hardcore ice anglers like to target here, as it’s yet another of Simcoe’s species that can reach enormous sizes!

Back in 2017, an angler caught the biggest burbot ever recorded in Ontario on Lake Simcoe! That fish weighed an incredible 17lb 9oz.

But, given the abundance of food, I’m pretty sure that there are even bigger ones out there!

Much like lake trout and whitefish, you’ll find burbot in the deepest areas of the lake. Stick to the bottom and fish late afternoons, evenings, and nights, as this fish is active during the dark hours of the day.

Target them with smaller minnow-tipped spoons or glow-in-the-dark jigheads. Those are deadly for nighttime burbot especially!

When Is the Best Time to Go Ice Fishing on Lake Simcoe?

Generally, the ice fishing season on Lake Simcoe stretches from early December to late March or early April, which is the best time to catch perch, pike, lake trout, and whitefish.

PRO TIP: It is recommended to head out with a guide if you are new to ice fishing and/or the lake. No matter how cold it is, first and last ice especially can be very treacherous. The first rule of ice fishing is always to stay safe!

Where Is Lake Simcoe Located?

Northward, near the town of Orillia, it drains to Lake Couchiching, and both lakes drain northwesterly via the Severn River to Georgian Bay.

How do You Get from Toronto to Lake Simcoe?

From Toronto, take Highway 400 and travel northbound to Barrie to reach Kempenfelt Bay. Drive through Barrie and continue on Highway 11 to get to the main lake area near Oro Beach, Parkside Beach, and Palm Beach.

Take Highway 404 northbound toward Beverley Isles or continue on Route 8 toward Balfour Beach to get to Cook’s Bay.

To get to Virginia Beach and Georgina Island, take Highway 48 northbound toward Baldwin and Mosington Park and then follow the highway to the right until you reach Virginia Beach.

Lake Simcoe’s number one ice fishing guide is called Shawn Cheng. His guide business is called Fish On Ice Fishing Guides, and together with his other guides, they’ll give you the best possible service and fishing experience!

Their Google Maps Rating has a clean 5.0-star review, and with Shawn’s and his crew, you can be sure to have a fantastic time on Simcoe’s frozen surface.

I’ve talked to Shawn personally, and he was kind enough to provide me with incredibly detailed information about the lake and its incredible ice fishing opportunities.

Very quickly, it became more than evident that Shawn knew exactly what he was talking about. He knows the lake like the palm of his hand, and the numerous fish that the Fish On Ice Fishing crew and their clients catch every season are perfect proof of that!

Here is what Sean and his fishing charter have to offer:

Shawn and his guides will cook an outstanding meal during your trip, preparing your freshly caught catch directly on the ice for you!

Watch the fish go for your lure in real-time with an Aqua-Vu Underwater Camera. This is an extremely cool feature that makes your fishing trip even more exciting!

If you don’t need or want to hire a fishing guide or want to bring your own equipment, here are some essential gear and tackle tips that can help you catch fish through the ice on Lake Simcoe.

All of the following items can be found on Amazon if you want to take a closer look:

Where Can You Buy a Fishing License for Lake Simcoe?

Fishing licenses can be bought via local tackle shops, fishing charters, or online at huntandfishontario.com. Here, you can also read up on additional license types, such as conservation fishing licenses.

*Please note that you will also have to purchase an Outdoors Card ($8.57) in combination with a 1 or 3-year fishing license.

How Thick Is the Ice on Lake Simcoe?

To get the latest updates on ice thickness and condition, you can check out Fishing Lake Simcoe’s Ice Watch Reports or visit the Lake Simcoe Region Ice Conditions Facebook Page.

If there aren’t any recent updates to be found online, please make sure always to contact one of the local guides, hut rentals, or tackle shops to get the latest information on ice conditions and safety!

PRO TIP: If ice and/or weather conditions are bad, don’t head out! One fishing trip is not worth risking your life!

There are a few really big and active Lake Simcoe ice fishing forums and communities on the internet!

The following forums have thousands of members who share valuable tips, locations, and their latest catches from the lake:

Make sure to check them out and join them if you’re planning on fishing Lake Simcoe. Fishing communities are valuable assets and networks that, more often than not, lead to new acquaintances and friendships!

Where Are Walleye Found? (Distribution and Habitat Facts)
← Previous
How to Heat Your Ice Fishing Shelter (A Helpful Guide)
Next →