How Big Do Largemouth Bass Get? (With Average and Record Sizes) 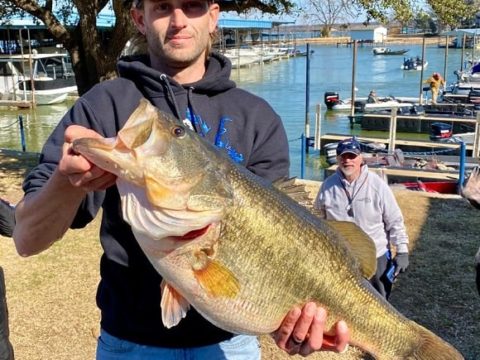 The largemouth bass is undoubtedly America’s most targeted gamefish and a fascinating top predator, giving the angler an excellent fight and reaching very decent sizes.

But just how big do largemouth bass really get, and how big is an average largemouth?

While the average size of largemouth bass is between 13 and 20 inches and 1 and 5 pounds, they can reach a maximum length of about 30 inches and a weight of a little over 20lb. A largemouth of 8lb or more is considered a trophy fish in most states.

Read on and learn more about the average and maximum size of largemouth bass, the current all-tackle world record, and how old largemouths can get.

What Is the Maximum Size of Largemouth Bass?

The largemouth bass (Micropterus salmoides) may not be America’s biggest freshwater gamefish, but it’s nonetheless a predatory species that can reach a respectable size.

Under the right conditions, it can reach a maximum length of about 30 inches and a maximum weight of a little over 20 pounds.

Of course, the maximum weight of any given population can vary greatly and heavily depends on the largemouth’s bass range.

While the largemouths of the northern states seldomly exceed 10 pounds, the southern states’ largemouth bass can get twice as big, reaching top weights of 17 to 20 pounds.

I’ve researched a few state guides and compiled them in the table below to make my point clearer.

The data clearly shows the difference in weight between northern and southern largemouths:

Clearly, if you’re after a monster largemouth bass, the further south you go, the better the chances of catching one!

What Is the Average Size of Largemouth Bass?

While those giant bass are out there, most anglers will catch average-sized largemouth bass, which would be fish of an approximate length of 13 to 20 inches and an approximate weight of 1 to 5lb.

Please remember, though, that these sizes really only are a broad average and that they can and often will vary significantly from fish to fish, population to population, and state to state!

Once again, it all depends on the conditions and habitat of the bass.

A great variety of factors can influence the size of the fish and result in average weights of 1-3lb in one lake and of 4 to 8lb in another.

Such factors can include the following:

Another interesting fact is that bass females will grow much larger than males, which is a phenomenon that is very common in the world of fish.

Male largemouth bass will seldomly exceed 5lb, which means that every fish above that weight is very likely to be a female.

On the other hand, there are smaller females as well, so it’s not a given that the 3lb bass you’ve caught is always a male.

Similarly, the occasional 5lb+ male will be caught as well, so you can never be 100% certain, unless it’s spawning time and you’re checking for obvious male or female characteristics, such as milt or eggs.

The male largemouth bass’ vent will be circular, while the female’s will be more oval.

This way, you’ll always be able to tell the difference between male and female largemouth, no matter its size!

What Size Largemouth Bass Is Worth Mounting?

Of course, the answer to this question is highly subjective, as the weight at which a trophy bass starts will vary from angler to angler.

Nonetheless, many bass anglers would agree that a bass of about 8 to 10lb and above would be very much worth mounting.

Additionally, I’ve also heard from many bass guys that a 10+ pounder is considered a trophy largemouth by most, so mounting fish of 8 to 10lb or more seems pretty reasonable if you ask me!

Once again, though, that trophy mount’s weight will depend on the water you’re targeting.

If your lake holds bass with a maximum weight of 8lb, mounting a six-pounder would be a natural thing to do if you ask me because that 6lb fish would be a pretty big largemouth bass in that water!

On the contrary, many anglers wouldn’t consider mounting an 8lb fish in a lake with plenty of 10 to 15-pounders.

So to sum up, it’s a highly subjective matter and the only person who should decide if your bass is a trophy or should be mounted is you!

Of course, you can always release it instead and allow another angler to catch that magnificent bass you yourself caught! But that too is a very subjective matter.

What Is the Biggest Largemouth Bass Ever Caught?

One was caught in the United States, and the other in Japan, where largemouth bass are also a popular gamefish.

The US-caught world record largemouth bass dates all the way back to 1932.

This behemoth weighed in at an impressive 22lb 4oz and was caught on Montgomery Lake in Georgia by angler George W. Perry.

I didn’t even know that such big bass existed in Asia as well, so researching these two world records was extremely interesting.

How Fast Do Largemouth Bass Grow?

During its first year, the largemouth bass has a fairly rapid growth rate and reaches an average length of 6 to 8 inches and an average weight of 1/2 to 1lb.

Though studies have shown that largemouth bass can weigh as much as 2lb after their first year if they grow in optimal conditions, which mostly means an abundance of forage, mainly in the form of smaller protein-rich baitfish.

They will grow with another 2 to 4 inches during their second year and gain another 1/2 to 1lb.

From year 3, largemouth bass will grow about 1 to 2 inches and 1 to 2lb annually.

The speed of growth is based on both the largemouth bass’ range (remember that southern bass can grow twice as fast as northern bass) and the abundance of forage in their respective habitat.

What Is the Lifespan of a Largemouth Bass?

The average lifespan of largemouth bass is 10 to 16 years, but a few specimens have been reported to be as old as 23 years.

What’s really interesting to mention is that largemouth bass found in the northern states will generally get much older than their relatives in the south.

That’s because they live in habitats with colder water temperatures and fewer food sources, making them grow and age slower than the bass of the south.

And so, a largemouth bass found in the southern states may only reach an age of 10 or 11 years, while its counterpart up north can get as old as 15 or 16 years.

This also means that the oldest largemouths, fish of 20 years or more, will typically only be found in the northern parts of the United States.

The southern bass reach their maximum size much faster, which means that they’ll also die quicker and simply cannot reach such an old age.

This gear and tackle is of top quality and sells at a very decent price on Amazon.

An awesome baitcasting rod of the highest quality! This rod is super lightweight, has great sensitivity and phenomenal action. Fits both beginners and seasoned bass pros. Easily the best baitcasting rod for the money!

An affordable high-performance baitcaster reel that’s perfect for bass fishing. Abu Garcia gear basically lasts forever, so you don’t have to worry about buying a new reel anytime soon! Makes for a great bass combo together with the Ugly Stick!

Without a doubt, one of the best braids available today. Zero stretch, great feel, and immense strength make this line the perfect pick for bass in both open and snaggy waters. Put on a 15 to 25lb test, and you’re good to go!

How Big Do Crappie Get? (With Record Lengths and Weights)
← Previous
When Do Largemouth Bass Spawn? (A Helpful Guide)
Next →