What Do Halibut Eat? (Favorite Prey and Baits) 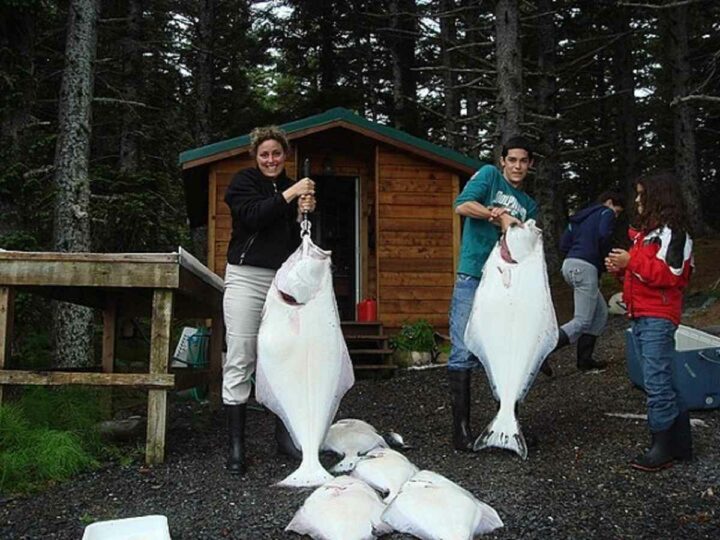 Halibut are huge ocean predators with an enormous appetite.

This fish can and will eat almost anything they can overwhelm, but what exactly do halibut eat?

Keep reading this article and find out precisely what types of fish halibut prefer to feed on, what the best baits and lures for this species are, and if halibut have any natural enemies.

What Types of Fish Do Halibut Eat?

Halibut are large predators with big mouths, a healthy appetite, and plenty of pointy teeth, and in many areas of the oceans, they are close to the top of the food chain.

As top predators, they’ll basically eat any fish that fits into their big, scary mouths. And as they can reach respectable lengths and weights, they have to eat plenty!

Some of the most common fish species eaten by halibut include the following:

Some lesser common forage fish of the halibut include:

Most of the above fish types live close to or on the bottom of the ocean, where you’ll find most halibut as well.

But then there are also pollock and salmon, which are found at various water depths.

Additionally, those species are large and fast predators themselves, which leads to the conclusion that halibut must be clever, strong, and highly adaptable hunters.

What Other Animals Do Halibut Eat?

As they are opportunistic feeders, halibut won’t avoid eating prey other than just fish.

Once again, the bottom of the sea, which is where they reside most of their lives, can give us valuable clues to what’s on the halibut’s varied diet.

Here, they can find and feed on plenty of the following types of animals:

Some reports and studies have even stated that lobsters have been found in halibut stomachs.

They really do seem to eat almost anything!

What Do Young Halibut Eat?

Instead, they mostly keep to zooplankton, small crustaceans, and other bottom-dwelling organisms, at least during their first year or so.

Once they enter their second year, the young halibut actually start to feed on smaller fish species.

Interestingly, studies have shown that larval and juvenile halibut require a higher protein and lower carbohydrate diet. Once they get older, they will need more dietary carbohydrates instead.

This could explain the preference for both zooplankton and krill during this early stage of their lives, as both forage types contain a high amount of protein.

While cannibalism among halibut isn’t all that common, it can and does occur in populations and fish of all ages.

It is most common for researchers to observe cannibalism among halibut larvae. In regions of the Atlantic and Pacific, this behavior has led to minor disturbances in annual stock recruitment.

Cannibalistic predation by larger specimens on young halibut is less common but can increase during years in which the halibut’s typical prey types are less abundant.

One research team studying halibut in the Bering Sea observed that cannibalism had occurred more frequently in a season with much lower amounts of herring and whiting.

The adult fish didn’t have enough to eat and had to turn on their own.

However, in regions of the oceans with a higher food abundance, young halibut aren’t the first choice of the older specimens, and cannibalism appears to be very rare.

What Are the Best Baits for Halibut?

When it comes to fishing for halibut, there are as many baits and lures as they are prey fish. Basically, it’s a neverending list!

When it comes to live or dead baits, most anglers will pick one of the following:

Some anglers prefer fillets, others steaks or bits and pieces threaded onto the hook. The choice is yours, but most variations will work well, as the buts don’t seem to be that picky!

You can also use a wide variety of artificial baits and lures to catch big halibut.

This article is too short to list them all, but the following all-time classics have landed plenty of trophy halibut over the years and decades.

You can find all of them on Amazon if you want to take a closer look:

If you want to be a successful halibut angler, you must try to mimic their prey as much as you possibly can.

If you manage to match the hatch, chances are you’ll end up catching buts!

As mentioned above, some of the halibut’s most common prey include herring, whiting, smelt, and octopus.

And so, the colors you’ll want to use are:

Additionally, combinations of those three, as well as red and blue, can often work wonders!

And if you can make your lures glow, you will most likely be the king of the halibut!

The added glow or fluorescence can give your lures an extra boost and make them much more visible down there in the sea’s dark depths.

But remember: as always, experimentation is your best friend when it comes to fishing! Try out different lure types and patterns and see what produces the bites.

What Other Animals Eat Halibut?

Even though halibut are such big and fierce predators, they still have a few natural enemies in the ocean.

The few predators that eat halibut include:

There are also humans, but I don’t really count us as “natural enemies” of the halibut.

Halibut found in the north Pacific have another natural enemy, and it’s a very small one!

Surprisingly, the sand flea, a tiny parasitic crustacean, is one of the halibut’s greatest threats.

These tiny critters get into the fish by digging through its skin or scales. Once inside, they will slowly eat their host alive until death (disgusting, isn’t it!).

Sadly, the sand flea has significantly and seriously impacted many halibut populations in the Northern Pacific, and very little can be done against this threat.

How Big Do Halibut Get? (Average and Record Sizes)
← Previous
How Big Do Great White Sharks Get?
Next →