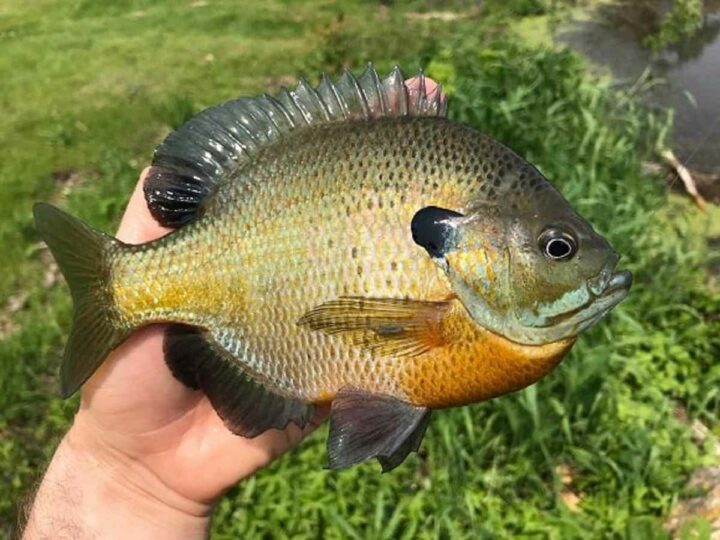 Bluegill are one of America’s most popular panfish. They are fun-to-catch gamefish and make for excellent table fare.

As the best time of year to catch bluegill is generally considered to be before and during the spawn, many anglers wonder when this panfish species is spawning.

The bluegill’s spawning season typically starts mid or late spring and lasts until late summer or early fall. They mostly spawn on gravel bottoms spawn in water temperatures of 65 to 80F and in very shallow water with a maximum depth of around 5 feet.

Keep reading this article to learn more about when, where, and how bluegill are spawning and how to best catch them before and during the spawn!

What Time of Year Do Bluegill Spawn?

The bluegill’s spawning season begins sometime during mid or late spring and can stretch until late summer or early fall, with peak activities during June and July.

Once the shallow areas of a water body reach a temperature of 55 to 60F, the males and, later on, the females will enter the shallows and prepare for spawning.

The actual spawning commences in water temperatures of 65 to 80F.

Distribution of the bluegill populations matters for the starting point of the spawning period, as northern populations, naturally, will have to wait somewhat longer for water temperatures to warm up.

That’s why the spawning season for bluegill in Minnesota or Michigan commonly starts somewhere in May, while it can begin as early as late March or early April in southern states such as Florida or Texas.

What’s really interesting about bluegill is that they have an unusually long spawning period that can stretch throughout the entire summer and sometimes even into early fall.

Spawning bluegill have been observed during both April, May, June, July, August, September, and sometimes even early October in many different water systems and states throughout the US.

Additionally, they don’t seem to mind hot water temperatures during high summer, as researchers have observed spawning activity in temperatures as high as 93F.

This suggests that these fish are both highly adaptable to different conditions and can spawn several times.

Where Do Bluegill Spawn?

Bluegill prefer areas close to shore for their spawning. You will most likely find them in shallow areas close to open and deeper water or in protective bay areas.

There will almost always be lower to medium-density vegetation close by, and the water in these areas will have moderate dissolved oxygen levels.

What Depth Do Bluegill Spawn at?

Bluegill spawn in extremely shallow water with an average depth of around 3 to 5 feet.

Spawning activity has, however, been observed in as little as 1 foot of water, which is quite remarkable!

Early spawning sessions, in April or May, will often occur in very clear water conditions, as temperatures aren’t that high yet. It is now that you can observe a live bluegill spawn in action!

The shallow spawning habitat and prolonged spawning activity also explain why male bluegill are so aggressive and protective of the spawning grounds and their eggs.

They are simply all too visible and exposed to nearby predators. So they literally have to defend their offspring with their lives!

What Type of Bottom Do Bluegill Prefer for Spawning?

However, it has often been reported that gravel is their number one bottom type.

Sand appears to be chosen if gravel isn’t in the vicinity, and other bottom types, such as rock or muck, are commonly ignored altogether, even if they are found in the spawning area of the bluegill.

And as bluegill are nest builders, this bottom choice makes a lot of sense!

For one thing, it’s pretty hard to build a nest on rock or other large-featured bottoms.

Sand, muck, or silt would be better suited, but as these bottom types aren’t as well oxygenated and can easily swallow up the eggs, they aren’t suitable choices either.

That leaves gravel! It’s easy to move around, lets through plenty of oxygen, and offers the eggs a certain level of protection from predators.

How Do Bluegill Spawn?

As already stated, bluegill are nest builders. They are also colonial spawners, meaning that up to 50 male bluegill will team up to build a nest site or colony.

Once the males move into the shallows, they’ll start hollowing out nests immediately.

DID YOU KNOW: A typical bluegill nest is about 2 to 5 inches deep and 5 to 25 inches wide.

Once that’s done and water temperatures have risen further, the bigger females will enter the scene.

Now, the fun slowly begins! The males will use their bright body colorations to attract a female.

They can also produce a grunt-like sound to court the female, which is very interesting.

Some researchers have suggested that female bluegill can produce such sounds when encountering a suitable male, suggesting a more advanced form of communication.

This has, however, yet to be confirmed by other studies.

Once a male and female decide to go for it, they circle the male’s built nest together. The female will then release her eggs into the nest, and right after her, the male will release its milt onto the eggs.

As soon as the act of mating is finished, the male will chase off the female and start to guard the nest until the fry has hatched.

Interestingly, they allow other females to deposit their eggs into the same nest!

Furthermore, bigger females with more eggs tend to spawn several times and deposit their eggs into more than one nest.

I guess anything goes when you’re a colonial breeder!

This colonial behavior also makes the bluegill such a strong and resilient fish species.

Guarding nests and eggs for several weeks or months is challenging, as there are plenty of predators that would love to eat the adult bluegill or their eggs and fry.

But, if you have a small army of 50 or so angry and tough male bluegill to go against, you might consider dining elsewhere!

As so often when it comes to smaller fish species: their strength is in their numbers.

Can You Catch Bluegill During the Spawning Season?

Ask any panfish angler, and they’ll tell you that the best time of year to catch bluegill is during the early spawn!

Not only is it effortless to find fish over the shallow flats once they’ve entered these areas, but both males and females usually have quite the appetite, making catching them a relatively easy game.

So once you’ve spotted a group of gills or their nests, it’s go-time!

Target anything that can provide cover, as that’s where the bigger females usually hang out before moving into the nest areas.

Weeds, reeds, sunken trees, overhanging branches, or anything else bluegill could hide in or under.

Use a light or ultralight spinning setup and fish with small lures or live baits. The fish are generally eager to feed, so they’ll hit almost anything!

PRO TIP: Nightcrawlers are a very popular bait choice for bluegill during the spawning season.

During the spawn, it’ll be harder to catch the females, but the males’ aggressiveness means that they’ll still attack most lures or baits you throw at them.

Use small jigs, cranks, softbaits, or live baits to lure them. Most of the time, they’ll strike!

PRO TIP: When fishing in very shallow water, make sure not to disturb the fish and anchor up as soon as you get close to them. They will spook very easily!

Whether you end up catching a male or female pre-spawner, the chance of catching a real trophy gill is excellent this time of year!

How Many Eggs Do Bluegill Lay?

Bluegill reach sexual maturity fairly early, as they can spawn at the young age of 2 or 3, with a length of just about 3 inches.

Naturally, such a small female cannot hold many eggs, so very young bluegill may only lay around 1,000 eggs.

Once they get older and bigger, their bodies produce more and more eggs, and fully-grown female bluegill can lay between 40,000 and 60,000 eggs, although research has shown that some females can produce and lay up to 80,000 eggs.

However, such a large amount of eggs is rare, as bluegill are a relatively small-sized fish species.

Do Bluegill Spawn More Than Once a Year?

While bluegill only have one spawning season a year, that period is rather long, and many females can lay eggs two or even three times during that period.

Males, on the other hand, can spawn and release their milt (sperm) many times.

A spawning session can last several hours. Most likely, the fish are exhausted after the act is finished.

It’ll take bluegill around 30 days until they can muster the energy to spawn again, which would explain a prolonged spawning period stretching over several months.

Bigger females contain far more eggs than smaller ones, and only the larger specimens can spawn two or three times.

As those big female bluegill will lay more eggs and give life to more young, their genes will dominate the next generation of bluegill. A masterpiece of evolution!

Can Bluegill Mate With Hybrid Bluegill?

A hybrid bluegill results from a natural or artificial crossing between a male bluegill (Lepomis macrochirus) and a female green sunfish (Lepomis cyanellus).

Contrary to common belief, these hybrids are not sterile but can breed and reproduce with their own and other fish species.

Although relatively uncommon, male hybrid bluegill occasionally mate with both female bluegill and green sunfish, producing a variety of subspecies with differences in genetic features and appearances.

This “double hybridization” could imply risks for the general bluegill population but generally doesn’t.

For one thing, when male bluegill and female green sunfish mate, the resulting offspring is commonly around 90% male, making further reproduction among hybrid bluegill difficult due to the lack of females.

Secondly, spawning male bluegill are highly aggressive, territorial, and protective of their nests and females, so any intruding male “wannabe” bluegill will have a hard time joining the party!