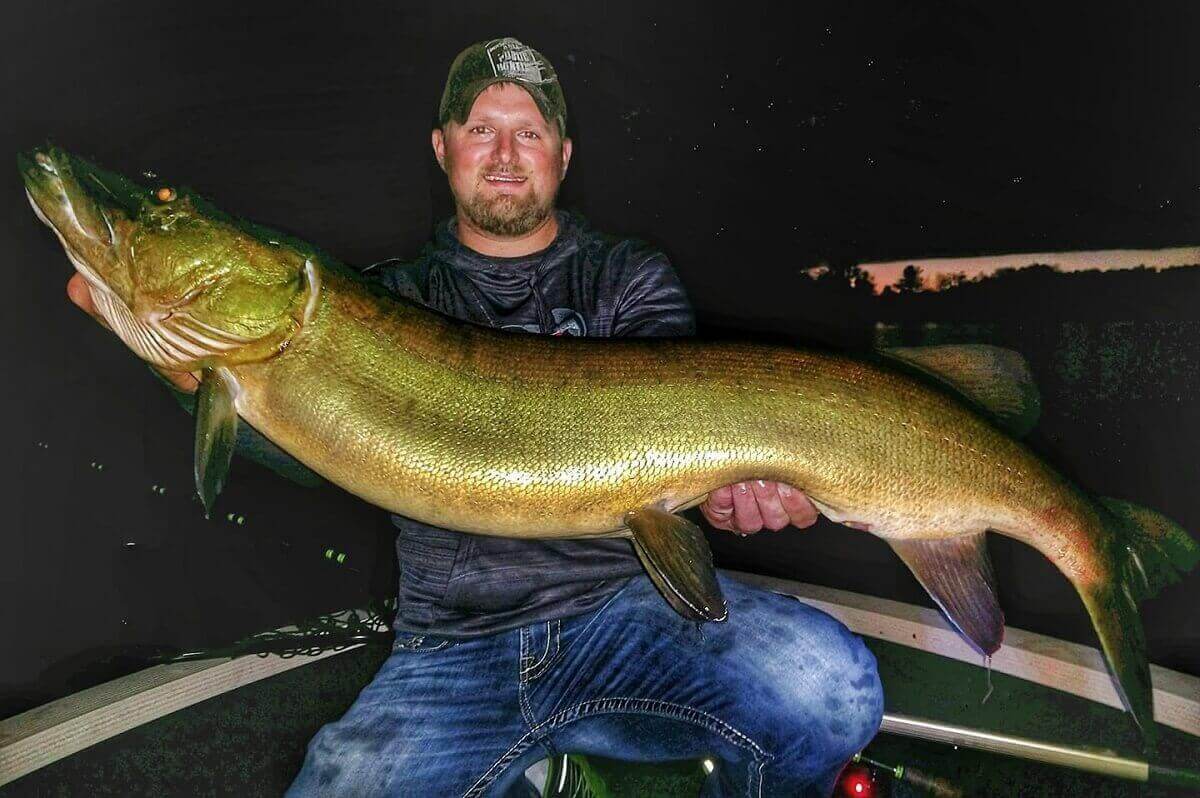 Fishing for musky during the daytime is an awesome experience in itself, but musky fishing at night is something really, really special. Nothing beats the excitement you feel when a big musky hits your bait and challenges you and your rod in complete darkness.

In order to successfully catch musky at night, you should target weedy areas, drop-offs, humps, and the shallow waters of bigger bays. Noisy or vibrating surface lures, such as poppers, crankbaits, and bucktails, will be most effective in the dark.

If you want to learn the best ways of catching nighttime musky, all you have to do is continue reading this article.

Can You Catch Muskie at Night?

The musky is a predatory fish that hunts and feeds both during day- and nighttime.

It is, therefore, possible to catch them in the dark and, especially during the warmer months of the year, nighttime fishing can actually yield better results than fishing during the day.

Much like northern pike, musky do not like high water temperatures and low oxygen levels. This is why they can get fairly inactive during the summer months, at least when it’s daytime!

As these apex predators need to feed a lot, even during high summer, they will shift their activity towards the cooler hours of the day, which include the ones between dusk and dawn.

And with the help of their well-developed senses and lateral line, they can actually hunt fairly effectively even in complete darkness.

So, if you’re up for some nighttime musky action, chances are actually pretty good that you will hook up!

PRO TIP Nights with a full, bright moon can be especially productive for big muskies!

Where Can You Find Muskie at Night?

While muskie will be found in open and deeper water during the daytime, they tend to move to the shallower areas at night.

For one thing, it’s because those shallow waters will hold more oxygen at night during the warm months of the year, making them more suitable for large predators.

For another, such areas will also attract a great number of prey fish that will seek shelter near the shore and close to underwater features.

This should be your first stop when targeting night musky. Often, they will lurk off the weed beds during daytime and start to move closer, or even right into the weed, at sundown.

If you can fish your lures just off those weeds, sooner or later you’re bound to get a take!

Drop-offs are always hot spots for various types of fish.

For the big predators, such a feature is the perfect hangout area, as it provides both cooler, shady water on the lower end during the day, and somewhat warmer, prey-filled water on the upper end at night.

Hit those shallower parts of the drop-off and you’ll significantly up your chances of finding a muskie.

RELATED READING: Check out this article if you want to read up on pike fishing at night

Another great underwater structure that can work even in deeper water. If you find humps that top out a few feet below the surface and are surrounded by deep water, it’s definitely a spot worth checking out closer.

Such rocky humps are preferred places for both muskie, northern pike, and walleye, so chances are good that you’ll find at least a few predators around such features.

This is an area that you could possibly even target from land, which makes it your best choice if you do not have access to a boat.

But even if with a boat, shallow bays are definitely worth trying out for night musky. Very often, the predators will keep to the cooler and deeper areas outside of those bays and wait until darkness falls to move in closer to the shore.

These areas are often teeming with baitfish during the night, which means that muskie can find a full dinner plate in a shallow bay.

PRO TIP: No matter when you fish for muskie, never do so without a adequately sized fishing net. Check out this article on the best muskie nets for more inspiration!

How to Fish for Musky at Night?

Spin fishing is the method of choice when it comes to night fishing for muskie. Most anglers prefer spin fishing over other methods for the following reasons:

Hence, a more active way of fishing will always win, especially when it comes to muskie. You are just that much more alert and focused!

This is a fish that is hard to fight and handle at any given time of day. But when it’s completely dark and you don’t even have the advantage of seeing what’s going on, it’s an even harder challenge.

Pro Tip: Avoid night fishing for musky during the colder months, as they will be much more active during the day that time of year!

Generally, muskie will be more difficult to catch from the shore, which means that fishing from a boat is good advice also for night fishing.

Of course, you will want to be able to control and steer your vessel in the darkness, in order to prevent accidents.

For that, having a boat GPS onboard that lets you map your venue can be a very smart idea, as it will be your eye in the darkness. You can find a decently priced GPS with all the essential features on Amazon here.

Additionally, bringing some lighting, in form of a boat light, is also recommended, both in order to help you orient yourself and to get a visual on your catch, especially if you’re planning on catching muskie on the figure 8!

If you don’t want to use a boat light, you can instead wear a headlamp, which is of great use when handling and unhooking the fish in the boat as well.

Pro Tip: No matter what light you end up using, make sure that you can dim it so that you won’t spook the fish!

When it comes to lure choice, you should focus on both noisy, colorful, and vibrating lures that can be fished on or close to the surface. Here, they will make the most noise and can catch the attention of a nearby muskie.

The following are my 3 top picks for nighttime muskie fishing:

This is probably the most popular muskie surface lure out there, and with its popping sound and tail, it’s the perfect night lure, as it gives off both a lot of sound and vibration.

Check out the incredibly effective Whopper Plopper on Amazon here

The Musky Double Showgirl is a brightly colored and very powerful spinnerbait that makes a ton of noise and is great for both shallow areas and deeper water.

It’s also the perfect lure for figure-8s, as it spins into action almost without much effort or a high retrieve speed.

If you want to purchase the Musky Double Showgirl for your next night fishing trip, head over to Amazon by clicking here

A fantastic inline spinner with flashy colors and 2 big spinner blades that create a lot of vibration underwater.

This classic big fish lure can be fished close to the surface and is great for weedy areas.

As mentioned above, a headlamp that you can dim is a very helpful tool when night fishing for muskie. Not only can you spot an approaching fish, but you will also be able to accurately figure-8 it.

Additionally, you will have much easier time handling your muskie once it’s in the boat and can hence avoid getting injured by it’s super sharp teeth and gill plates.

Pro Tip: I prefer headlamps with a red light option, as red is a much warmer and softer color that won’t spook or irritate the fish as much.

Whenever you have to unhook a toothy predator, using long-nose pliers is a very good idea. That holds especially true when it comes to muskie.

Those razor-sharp teeth can really do some damage to your fingers and hands, and using pliers is a safe and simple way of preventing that. Make sure to never forget them when you’re targeting muskie!

RELATED READING: Read this article to find out interesting facts about muskie teeth

For extra protection, I can warmly recommend using armored gloves. I use them on my pike fishing trips as well, and they really make a big difference.

Not only will they protect you from the teeth and your hooks, but also from those dangerous muskie gill plates, which you’ll be more exposed to when handling the fish. You can find a pair of high-quality and 100% cut and tooth-proof gloves on Amazon here.

If you’ve managed to cut yourself regardless, having a first aid kit on board to quickly patch things up can save a fishing trip from an early end!

When to Use Wire Leaders for Fishing?
← Previous
Best Fluorocarbon Leaders for Pike
Next →
Click here to cancel reply.

Cool article! Though i do not remember giving permission to use my photo. Please remind me when that was

thanks for reading. And I've answered your question via FB messenger. Hope that's ok. :)