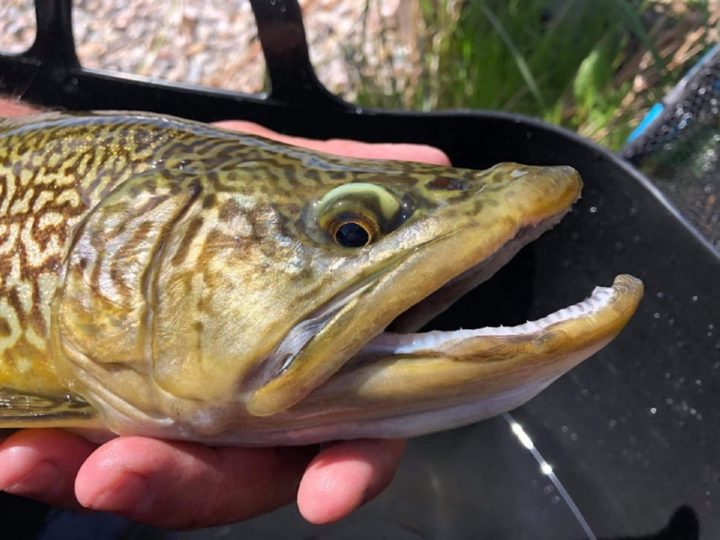 Trout is both an extremely popular game and food fish and a lot of people are wondering whether or not this fish species has teeth. As I am an avid trout angler myself, I decided to write an in-depth article on the interesting topic of trout teeth.

As the trout is a predatory fish species, it is equipped with plenty of teeth. Trout have both larger vomerine teeth located on the roof of their mouths and smaller, needle-like teeth along their upper and lower jawlines. Both sets are very sharp and can definitely hurt you.

Keep reading this in-depth article for all the facts and some really amazing images on trout teeth.

Do Trout Have Teeth?

As they are predators, all trout species and subspecies have teeth. Not all trout have the same types of teeth, but they all have rows of smaller and/or somewhat bigger teeth that allow them to grab and hold their prey.

Of course, both sets of teeth will be smaller in juvenile fish and larger in adult specimens.

Most trout species have two different sets of teeth; one set of very small, needle-like teeth along their upper and lower jawlines and one set consisting of 2 rows of slightly larger teeth on the roof of their mouths.

The latter ones are called vomerine teeth, which, quite funnily, are most commonly found in reptiles, such as frogs. There are also a few gobiid fish that have vomerine teeth, but otherwise, such teeth are extremely rare among fish species.

Vomerine teeth are neither canine nor conical but are instead incisor-like teeth. Their function is to both hold the trout’s prey in its mouth and, as they are angled inward, to also make swallowing it easier.

This combination of different types of teeth is a rather sophisticated evolutionary development that helped make the trout such an advanced hunter.

While the smaller, needle-like teeth help with the initial catching and tearing of a smaller fish, the vomerine teeth handle the rest, once the trout has managed to get its prey further into its mouth.

As the trout has to be able to quickly penetrate its prey with its teeth, both the smaller teeth along its jawlines and the somewhat larger vomerine teeth are extremely sharp.

Trout eat all kinds of smaller prey and some of which have hard, protective shells, fins, skin, bones, or scales, which makes sharp teeth an even more important necessity.

Their teeth simply have to be razor-sharp in order for them to be able to both penetrate the tough exterior and hold on to the trout’s intended meal. It’s the reason why almost all predatory fish species have sharp teeth, really!

What Do Trout Eat?

And speaking of the trout’s menu; what do trout actually hunt and eat? Well, as I mentioned earlier in the article, trout eat a large variety of smaller animals and any population’s preferred prey is determined by the environment they dwell in.

Trout that live in river systems will hunt for different prey than trout that are found in lakes or the sea.

Similarly, deepwater trout won’t hunt for the same prey as trout that live in shallow water areas near the shoreline. And so forth, you get the picture!

RELATED ARTICLE: Unsure if fishing with live bait is allowed in your home state? Then check out this complete 50 state guide!

As you can see, they basically eat everything that crawls or swims and is small enough to fit in their mouths! This also explains the wide variety of baits and lures that you can use to catch trout fish!

The following list includes the very best trout lures and flies. You can find all of these extremely effective lures on Amazon:

Can Trout Hurt You?

The sharpness and plentifulness of their teeth mean that they can most certainly hurt you if you happen to have your finger or hand inside their mouth while trying to unhook a trout!

Trout can flop and move around quite a lot in the net or on land and trying to get the hook out without getting cut or bitten is often an impossibility!

And while trout teeth most likely won’t hurt you seriously, you can definitely get a really nasty and bloody bite or cut. Trying to stop that bleeding can be quite time-consuming, especially when your hands are in contact with water!

This can cost you valuable fishing time and if you’re really unlucky, you might even have to end your fishing trip prematurely to drive home and get stitched up.

Pro Tip: If you’ve hurt yourself badly, having a first aid kit with you on the bank or boat might save your fishing trip! You can stop the bleeding and get stictched up quickly and can hence continue fishing! You can find a complete and waterproof first aid kit on Amazon here.

In my opinion, that’s not worth the risk at all! And besides, there are really simple and safe ways of unhooking trout without getting hurt. To know what they are, just continue reading!

How to Unhook a Trout?

So how can you get that hook out of the trout’s mouth without slicing your fingers? The, by far, best and most effective way is to use long-nose fishing pliers!

Not only do they allow you to keep your fingers away from the fish’s mouth and teeth, but they are also extremely precise hook removers!

Fishing pliers effectively prevent injuries and make for a very fast unhooking and releasing of the fish. There is really no better and simpler tool than that if you ask me! Check out my favorite long-nose fishing pliers on Amazon here.

Pro Tip: If possible, unhook your trout while it’s still in the landing net and water. This often makes for a swift release and is, by far, the msot fish-friendly way of unhooking your catch!

Of course, you won’t be needing a swift release method if you are planning on keeping your catch. But using pliers can still save you from a nasty cut. Because the teeth can still hurt you, even when the fish’s already dead!

Can Trout Bite Through Fishing Line?

Despite the fact that the trout’s teeth are very sharp, they are not able to bite or cut through fishing line. This is mainly because their teeth are fairly pointy and not set close enough together.

I have fished with both braid and monofilament mainline straight through to my lure and have never lost a trout!

However, a certain level of abrasion can still occur after many fish caught on the same line. Additionally, trout can be extremely lined shy, especially in clear water conditions, which is why you should definitely use a leader when fishing for trout!

Do You Have to Use a Leader for Trout Fishing?

While you certainly don’t need to use a wire leader when fishing for trout, having a fluorocarbon leader between your mainline and your lure or bait is never a bad idea when it comes to this species!

A thinner fluorocarbon leader can both withstand the abrasion that will occur over time and make the end of your line practically invisible!

This can be a huge advantage when fishing for trout in clear water! Trust me, on a wrong day, they will otherwise be impossible to hook up to.

Don’t shy away from using longer leaders of at least 2-3 feet, the extra length will serve you well. The less line that trout can spot, the better!

When it comes to the right pound test for your fluorocarbon leader, this really depends on both the size of your target fish and the water you’re fishing in.

Generally speaking, a 6-8lb fluorocarbon leader will be totally sufficient for smaller-sized fish and open water without any obstacles.

Bigger and stronger trout demand a stronger leader, and so do snaggy waters! So, if you’re after those monster trout in areas with a high risk of getting snagged, don’t hesitate to tie on a fluorocarbon leader with a 20-25lb test!

This may sound too think, but don’t forget, it’s fluorocarbon! It’ll still be largely invisible and you can be 100% sure to land that trout of trouts, no matter what snag might get in your way!

You can find an awesome fluorocarbon leader material for trout on Amazon here.