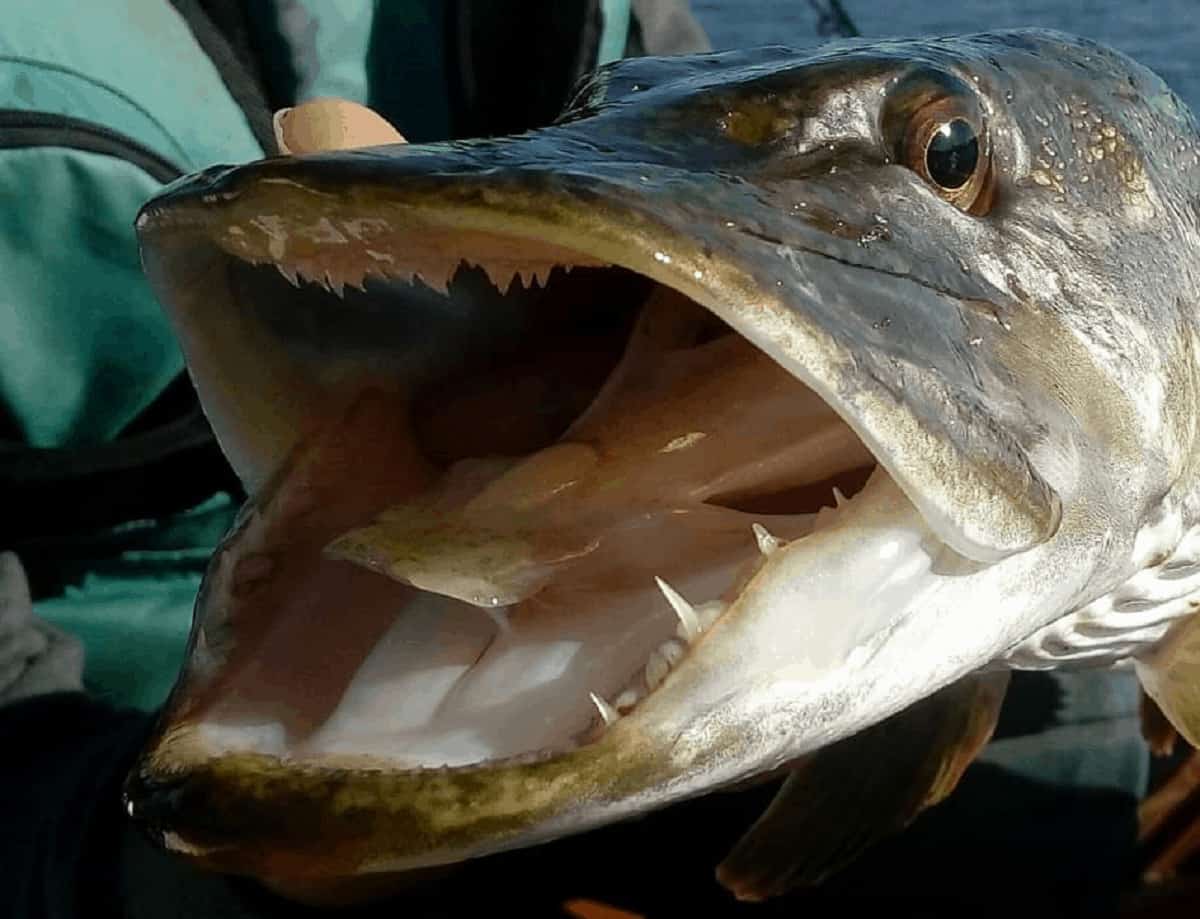 Northern pike are the perfect hunters! Evolution has made this fish the ultimate apex predator, and I’m thrilled every time I catch one of those hunting machines.

Their teeth are the stuff of nightmares, but they are also extremely fascinating, which is why I wanted to learn more about them.

Northern pike have plenty of smaller needle-like and larger fang-like teeth. In fact, they can have up to 700 of them, and all of these teeth are razor-sharp. Pike do not shed all their teeth during winter, and they do not bite humans, but they can certainly hurt and injure a fisherman’s hand.

If you’re also wondering if northern pike can bite through fluorocarbon and braid line or if they could actually manage to bite off a finger, you should definitely keep reading.

Evolution has made the Northern pike a perfect hunter and killer. Fishermen often refer to pike as “water wolves”, a nickname which is more than apt for this fish.

This holds especially true when you look at a pike’s teeth; they’ve got some pretty big and scary chompers in their mouths!

Pike have rather large, fang-like teeth, both along the upper and lower jawline. In the frontal area, the teeth are smaller than the ones on the side but more numerous.

These teeth, which are somewhat apart from each other (between 0.5-2.5 cm or 0.2-1 inch), are used to grab hold of a prey fish. The pike can literally sink its large teeth into its meal and anchor them there.

On the roof of the pike’s mouth are two parallel pads of plenty of tiny, needle-like teeth. These are angled inward as well and perfectly prevent any prey from escaping.

If you were a baitfish and you would end up in a pike’s mouth, you would almost certainly never get out again unless the pike would loosen its jaw grip on you for a moment.

Pike have rather large heads; hence, their jaws become large and powerful.

This lethal combination of sharp large and small teeth, powerful jaws, and an ability to open these jaws extremely wide makes the Northern pike a well-armed and highly evolved predator.

Its high level of evolution and efficiency is further supported by its geographical distribution, as pike can be found all over the Northern hemisphere; in Russia, Europe, and North America.

How Many Teeth Do Pike Have?

If we add all its large and small teeth, a normal-sized pike can have anything between 300 and 700 teeth in its mouth.

Most of these would, however, belong to the pads on the roof of its mouth (the small needle-like ones). These make up around 90% of its teeth. The large, fang-like teeth are actually quite few in number.

But they can grow to an enormous size! I myself have caught pike with teeth of at least 2 cm (0.8 inches).

I actually keep one as a trophy in my wallet from a pike I caught on the ice many years ago.

That tooth was stuck in the baitfish that the pike still had in its mouth when I landed it; pretty cool!

RELATED READING: Make sure to also check out this article if you want to know how to tell if a pike is male or female

You definitely respect a tooth like that; I can tell you that much.

There is a newspaper article that talks of a dead pike skull that was found near the River Cherwell in the UK.

This enormous pike is said to have weighed 50 lbs and had a total of 700 teeth in its mouth.

The skull alone measured 12 inches, and it actually contained teeth that were over 1 inch in length! That is one big mother of a pike!

There are many folklore and tales regarding Northern pike, which is definitely one of the more interesting varieties.

Many fishermen in the U.S. proclaim that Northern pike shed all or most of their teeth once a year. Other U.S. fishermen disregard it as a fairy tale. So, is it true or not?

In Europe, most anglers have not even heard of this theory, and it is certain to say that European pikes do not shed their teeth.

Of course, this could be a regional phenomenon that only happens in North America. However, this appears to be rather unlikely for these three main reasons:

RELATED READING: Did you know that there are some regions in the world in which pike can live in saltwater?

On the other hand, there is pretty solid data that confirms that pike do not shed their teeth once a year.

According to a study made in Lake Ontario, researchers found out that there is no measurable loss of teeth or any indication of gum weakness in Northern Pike.

This is not to say that pike do not sometimes lose some of their teeth! On the contrary, this happens fairly often.

For example, during the spawning season, when things are heating up, or when a pike bites into a rather hard scale, fin, or bone of a prey fish. All of the lost teeth usually grow back, though.

PRO TIP: Check out the related pike teeth Google Web Story for a quick visual summary of this article!

Not intentionally, no! Understandably, people would get afraid when they see or hear about big pikes in lakes where they are taking a swim.

But the chance, or risk, of a pike actually attacking and biting a human in the water is close to zero!

Of course, many fishermen get “bitten” by pikes when trying to unhook them.

This is a very delicate and challenging task, especially when you have a very big pike in the net and you have to try to get several trebles out of that mouth!

These tools can help prevent serious injuries from pike teeth:

Pro Tip: No matter how small or big the pike I catch are, I always like to wear armored gloves when handling them, as it’s just so much safer! This way, I avoid getting bitten and can fully concentrate on unhooking the fish. Check out a pair of really good cut and puncture-proof fish handling gloves on Amazon.

Could a Pike Bite Your Finger Off?

No, it could not. Its teeth are simply not strong enough to bite through a human finger bone. Technically, the larger teeth could penetrate through to a bone in your finger, but they could not bite them off.

But be careful nonetheless, as these teeth can definitely skin your fingers or your entire hand! Like a baitfish, if your finger or hand is in that mouth when it snaps shut, it is bound to stay there.

Pro Tip: Under no circumstances, try to pull out your hand from a closed pike mouth!

If and when that happens, remain calm (even though it’ll hurt a lot)! Do not try to pull out your finger or hand instinctively, but try to open the pike’s mouth again first!

Then, carefully remove your finger or hand and try to patch things up (there will be blood!).

And make sure to always have a first aid kit with you when fishing for toothy predators. You can purchase a complete and waterproof kit on Amazon.

If you want to start pike fishing and need to gear up, make sure to check out this helpful buyer’s guide I wrote:

Can Pike Bite Through Fluorocarbon?

Moving forward to less dangerous pike bites! Yes, pike can bite through fluorocarbon line, even though they will have a hard time doing so if you use a suitable diameter.

The fact that fluorocarbon line is practically invisible underwater can be considered advantageous when using it as a leader.

But, it is essential that you use a fluorocarbon leader of at least 80lb, which is a pound test that has worked very well for my pike fishing.

RELATED READING: Make sure to read up on the best and most suitable pike leaders (both wire and fluorocarbon)

Even with such a diameter, it remains crucial that you check your fluorocarbon leader fairly often, as every pike bite can worsen its abrasion resistance. Better safe than sorry, right?

Can Pike Bite Through Braid?

Here, the answer is a more solid yes, unfortunately. Many fishermen use braided line when fishing for pike, and that is perfectly fine if it is used as the mainline!

As braid has fairly low abrasion resistance, pike will have an easy time biting through it. And therefore, it is absolutely not suitable as a leader material when the target fish is northern pike.

Many people prefer this material over monofilament for their mainline.

If you use braid, just make sure you use either the above-mentioned extra-thick fluorocarbon leader or a simple wire leader at the end of your braided mainline.

If you want to learn more about the northern pike and muskie, you should also check out these articles:

Do Fish Bite in the Rain?
← Previous
Not Catching Any Fish? (These 9 Simple Tricks Will Help You)
Next →
Click here to cancel reply.

FYI. I recently (March 15, 2022) caught 4 Pike in a South Dakota lake. I noticed the largest had almost no teeth and took photos of the lack of teeth. (I would gladly forward the photos to you) While cleaning the other Pike I realized the other 3 also had very few teeth. You could also see some teeth were growing back. I’ve caught numerous Pike over the years and have never seen this before. I found this article while researching Pike teeth loss and enjoyed reading it!

That is extremely rare, indeed, I believe! I've never caught a pike with substantial teeth loss myself!

That said, it does occur, obviously. :) My guess is that those fish were either old or had some kind of disease...could that be the case you think?

Tight lines and thanks for reading! /Max

Very well written article Max. We do try to avoid their teeth when handling them, especially if hooked deeply. A couple of things should be mentioned: Be careful if putting your hand under their gills to lift them, don't get into the gill rakers. You can damage them and they're also sharp. Secondly, please don't lift a pike that you plan to release by the eye sockets. You can damage their eyes, even blind them hindering their ability to hunt because they are primarily sight feeders. If you plan on keeping one for eating, keep the 50cm to 80cm pike. These are the best table fare and most abundant. Good luck all fishermen everywhere.