What Types of Salmon Are Found in Alaska? 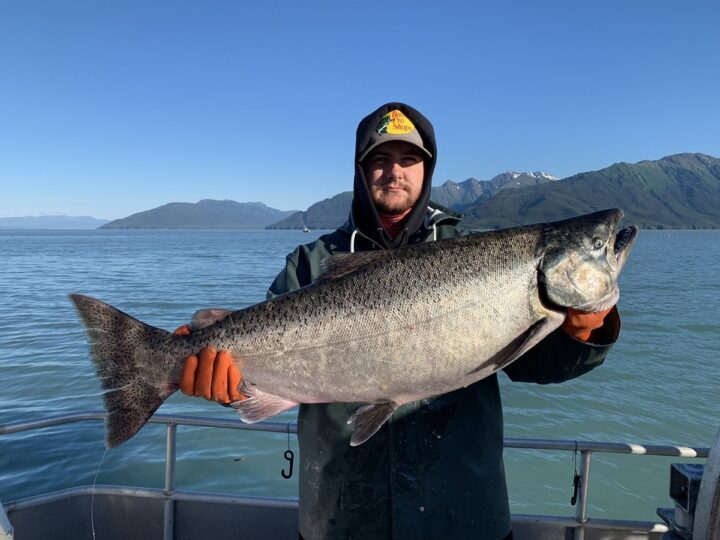 Alaska is considered an absolute Mecca for salmon. Both commercial fishermen and recreational sport anglers can make the catch of a lifetime up here!

But how many salmon types are there in Alaska? And how abundant are they in this state?

If you want to find out everything there is to know about Alaskan salmon, all you have to do is keep reading this article!

How Many Types of Salmon Are There in Alaska?

All five types of Pacific salmon can be found in the sea around Alaska and the state’s numerous freshwaters.

These fish are native to Alaska, and many of them occur in huge numbers.

They include the following salmon species:

King or chinook salmon are the least abundant salmon type in Alaska.

According to the Alaska Department of Fish and Game’s in-season commercial salmon summary, the average number of caught king salmon is declining year after year.

However, Alaskan king salmon used to be extremely abundant back in the good old days. According to research, warming seas and rivers have contributed to their decline in recent decades.

Cohos are relatively abundant in Alaska, and as they are highly adaptable fish, they inhabit most freshwater systems in the state.

Alaska coho salmon can be found in coastal areas, large river systems, and the tiniest tributaries, making them an attractive target for both commercial fishermen and recreational sport anglers.

Alaska chum salmon are even more abundant than coho salmon and are said to be the most widely distributed salmon species in the state.

They can be found all over Alaska and are a priced game fish in the sport fishing tourism industry.

According to the Alaska Department of Fish and Game, commercial chum harvests have more than doubled since the 80s, primarily thanks to a well-developed state hatchery program and increased global exports.

This salmon species is the most numerously commercially caught salmon fish in Alaska.

Pink salmon runs are gigantic, as pink salmon only spawn every other year.

This type of salmon is found all over the state and migrates up both very big and very small river systems.

Interestingly, Alaskan pink salmon have been harvested commercially since the late 1800s.

Alaska is home to one of the world’s biggest wild sockeye salmon populations.

In good years, tens of millions of fish can migrate up Alaska’s largest river systems.

When sockeye salmon enter freshwater, their bodies turn a deep red, and their heads turn green.

These colors are especially pronounced and bright in the dark, clear freshwaters of Alaska, making them the state’s most beautiful salmon species.

What Is the Biggest Salmon Type in Alaska?

The mighty king or chinook salmon is, by far, the largest salmon species found in Alaska.

But that’s not all, as Alaska has also produced both the all-tackle and commercial king salmon world records!

The biggest commercially caught chinook (and the biggest one ever caught) is a behemoth of a crushing 126 pounds.

This giant salmon was caught in a fish trap near Petersburg back in 1949.

The all-tackle rod and reel world record comes from the famous Kenai River, a renowned salmon fishing destination in Alaska.

This fish weighed an incredible 97 pounds 4 ounces and was caught in 1985.

Imagine hooking up to such a beast! The fight must have been unreal, especially considering that the fish was caught in fast-flowing water.

RELATED ARTICLE: How Big Do Salmon Get?

What Salmon Is Most Abundant in Alaska?

Both chum, pink, and sockeye salmon occur in huge numbers in Alaska, but the most abundant salmon type of them all is the pink salmon.

Naturally, wild pink salmon have always been plenty in the Pacific Northwest. Between 1960 and 1990, the average annual Alaska harvest was around 45 million salmon.

Due to ever-increasing hatchery programs, those numbers have risen to an annual average of 100 to 150 million since the early 90s.

That’s a lot of Alaska pink salmon right there!

It has been established that there are actually too many hatchery-grown pink salmon in the Pacific now.

Their high numbers cause a threat to the wild salmon populations, as they tend to interbreed with wild fish but are overall less successful spawners, which could result in declining populations in the near future.

And so, the question is if all the hatchery efforts actually make sense for the region or if they do more damage than good.

What Is the Best Salmon in Alaska?

They are considered gourmet-grade fish worldwide, both for their brightly orange-red colored flesh, smooth texture, and flavor richness.

Both canned and freshly served sockeye salmon are to die for, and sockeye eggs are extremely popular in Japan.

Wild sockeyes, especially, are a food fish of the highest quality, making them the best salmon in Alaska.

They are considered gourmet-grade fish worldwide, both for their brightly orange-red colored flesh, smooth texture, and flavor richness.

Both canned and freshly served sockeye salmon are to die for, and sockeye eggs are extremely popular in Japan.

Wild sockeyes, especially, are a food fish of the highest quality, making them the best salmon in Alaska.

What Is the Healthiest Alaskan Salmon?

Once again, the sockeye salmon take home the price! More specifically, wild Alaskan sockeye salmon are pretty much the healthiest salmon you can eat.

For one thing, their meat is extremely rich in vitamin B12, as they eat a ton of plankton during the time they spend in the Pacific ocean.

For another, they contain a lot less saturated fats and more essential nutrients than their farmed counterparts.

Additionally, wild-caught salmon are a good source of healthy omega-3 fatty acids, proteins, and vitamins A, C, and D.

What Is the Most Expensive Alaska Salmon?

By far, the king salmon is the most expensive salmon type in Alaska.

On average, one pound of king salmon sells for around $5.00 to $6.00, which is much more expensive when compared to the other Pacific salmon types:

But these are just the market prices!

Once the salmon hit the stores and restaurants, the price per pound goes up considerably. Especially for wild king salmon!

According to Quality Seafood Delivery, the price per pound for hatchery or farmed king salmon is about $25-$30.

On the other hand, a pound of wild Alaskan king salmon can cost anything from $35-$50!

In some years, when catch rates could be better, the price per pound can even be as high as $75. That’s a lot of money for one pound of salmon!

Why Is Alaska King Salmon so Expensive?

The main reason for the high price per pound for Alaskan king salmon is, unfortunately, their decline.

In other words, the supply is dwindling while the demand stays relatively high.

And that rarity drives up prices for this type of wild Alaskan salmon.

What Is the Most Famous Salmon in Alaska?

Even though their numbers have decreased in recent years, king salmon are the true kings of Alaska.

They are the most valuable catch for commercial fishing boats and, by far, the most sought-after target fish for salmon anglers.

And that’s not really surprising if you ask me!

I mean, how awesome must it feel to fight a 50+ or 60+ pound king salmon in one of Alaska’s beautiful and legendary salmon rivers?

That’s the stuff angling dreams are made of!

How Many Alaska Salmon Are Harvested Each Year?

Over the last decade, the average annual harvest of Alaskan salmon amounted to around 170 million fish.

During bad seasons, the number of caught fish can be as low as 100 to 120 million salmon, and during outstanding seasons, commercial fishermen have caught as many as 200 million fish.

Of these fish, sockeye tend to account for around 35% of the harvest.

What Are Red Salmon in Alaska?

As mentioned above, there are five different types of Alaskan salmon. And each of them has several local and regional nicknames.

As the icy and clear water of the Alaskan rivers turns the sockeye’s body an intense and bright red, they are also commonly referred to as red salmon.

What Are Silver Salmon in Alaska?

The frigid Alaskan waters also give the coho’s body and back a dark metallic blue or green color.

As this coloration makes them appear chrome-like (much like steelhead), they have been given the nickname silver salmon.

What Salmon in Alaska is Called Dog Salmon?

Additionally, their gums and lips start to rot and disappear, making their dog-like teeth even more pronounced.

This is why they also carry the name dog salmon.

RELATED ARTICLE: Everything You Ever Wanted to Know About Salmon Teeth

What Are Keta Salmon in Alaska?

Chum salmon found in Alaska also go by the name of keta salmon.

The word dates back to 19th-century Russia and somehow found its way to the Pacific Northwest.

Unfortunately, I couldn’t find out what this Russian word means or why it was introduced in Alaska.

What Are Humpies in Alaska?

This one is the most obvious of them all!

Due to the male pink salmon’s enormous humped back, which they develop during the spawn, pinks in Alaska are commonly called humpies or humpback salmon.

I also found out that pink salmon in Alaska are often referred to as “bread and butter fish” by the locals.

Pink salmon are an essential fish for coastal communities in Alaska, as they fuel both local commercial fisheries and fishing tourism-based economies.

Are There Atlantic Salmon in Alaska?

Atlantic salmon aren’t native to Alaskan waters, but a few years ago, some 300.000 fish escaped a net pen from a fish farm near Cypress Island in Washington.

Officials and researchers estimated that thousands of Atlantics escaped into Puget Sound, and it is believed that quite a few of them found their way up north to Alaska.

Atlantic salmon caught in Alaskan salt or freshwaters shall not be cleaned and must be kept whole, as they are considered a biologically undesirable species in this state.

If you catch an Atlantic in Alaska, make sure to report your catch to the ADFG’s homepage here.

A Complete Guide to Steelhead Fishing in Oregon
← Previous
How Big Do Peacock Bass Get? (With Average and Record Weights)
Next →