When Do Crappie Spawn? (Temperatures, Times, and Locations) 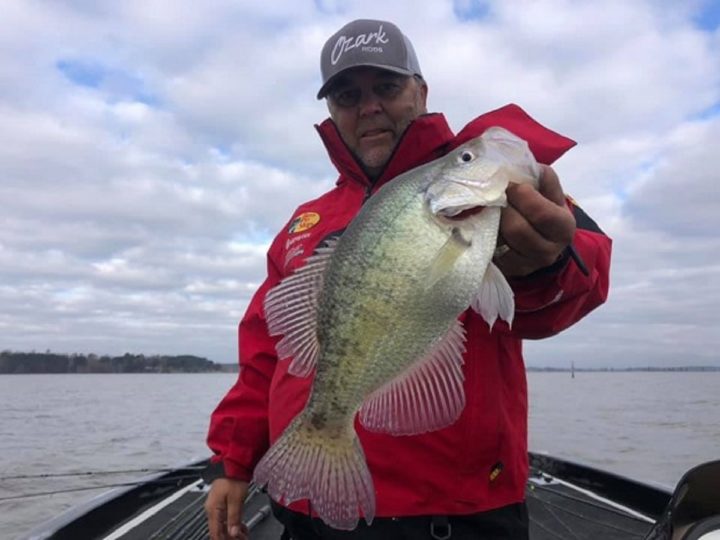 The crappie is America’s second most popular freshwater game fish and their spawning season is one of the year’s best periods to target them.

But when do crappie spawn, exactly?

Depending on their range, crappie spawn between late February and mid-June. They will gather in large numbers in shallow water areas up to 6 feet when temperatures are between 50 and 60F. The actual spawning takes place when water temperatures are around 65F.

Read on and find out everything about the famous crappie spawn and if and how you can catch them during their spawning season.

What Time of Year Do Crappie Spawn?

As crappie (Pomoxis) are found all over the US and southern Canada, their spawning season stretches from late February to mid-June.

Naturally, the northern populations will spawn much later than the southern ones, as spring and warmer water temperatures arrive later in the year than down in the south.

Large schools of crappie will gather in shallower areas of their habitat when the water reaches a temperature of around 50 to 60F.

This temperature range acts as a trigger for the fish and signals them to get ready for breeding.

It is, however, not before the water temperature is in the 65F range that the actual act of spawning, which typically lasts one to three weeks, will commence.

As this fish species has such a large geographic range and is such a sought after game fish, I went ahead and researched the spawning periods for different regions of the North American continent:

Where Do Crappie Spawn?

Crappie will spawn in the shallower areas of the water they inhabit, no matter if the habitat in question is a deep lake or reservoir or a relatively shallow pond or dam.

They do so because such areas drastically increase the chance of a successful spawn and, hence, the next generation’s survival.

For one thing, temperatures in shallow water are higher and more stable during both day and night.

Warmer, stable water temperatures are essential for the crappie spawn and almost always equal plenty of cover in the form of vegetation and structures such as:

That cover, in turn, means protection from larger predators, which can be a threat to both the spawning crappie and their fry.

Additionally, shallow areas near the shore or in bays offer better protection from winds and wave turbulences, which can decrease the survival rate of the crappie’s eggs and hatched larvae.

DID YOU KNOW: In most waters, it has been observed that the bigger fish will enter the scene first and that the smaller fish that are greater in number will follow them a little later.

Another observation that many anglers have made is that black crappie will almost always spawn first in waters that hold both black and white crappie.

What Depth Do Crappie Spawn at?

Crappie commonly spawn in water depths of between 1 and 6 feet, depending on the temperature and clarity of the water.

Clearer water can be penetrated more easily by sunlight, reaching a higher temperature even further down in the water column.

In contrast, stained water cannot be penetrated to the same extent by the sun’s rays and is somewhat colder at greater depths.

Hence, crappie that inhabit clear water bodies will typically spawn in a water depth of about 3 to 6 feet, while crappie living in muddy water conditions can spawn in water as shallow as 1 to 2 feet.

What Type of Bottom Do Crappie Prefer for Spawning?

Crappie can spawn over any firm bottom that isn’t soft silty, as their eggs could otherwise risk sinking into the soft matter.

Preferable bottom types can include the following:

PRO TIP: Their spawning grounds will almost always be close to cover no matter what type of bottom they choose, which is important to remember if you want to fish for crappie during the spawn!

How Do Crappie Spawn?

During the pre-spawn period, the male fish will construct nests by sweeping out small depressions on the bottom.

To accomplish that, they use both their bodies and tail fins to create a bowl-shaped hole in the ground.

These small nests will usually be made close to cover to ensure that the eggs and fry will survive the first crucial days of their existence.

Once the nests are built, and the water temperature is right, the crappie spawn is about to begin.

First, the females will swim over the nests and lay their eggs in them.

The males immediately follow them, release their milt onto the eggs, and fertilize them.

When the crappie’s breeding act is over, the males will remain at the scene to guard the eggs until they hatch, which typically only takes about three days or so.

During that time, the male fish will defend the nests and eggs at all costs and can become highly aggressive.

Can You Catch Crappie During the Spawn?

Ask any crappie angler out there, and they will tell you that fishing for crappie during the spawn is probably the most productive time of year!

As you can read further up in the article, you know that they are holding up in shallow water near heavy cover, and in great numbers at that.

Additionally, they are surprisingly hungry this time of year, which often makes fishing for them during the spawn an easy challenge.

So really, the only thing you’ve got to do is locate them in those shallow water areas near the shoreline!

If you manage to do that, jigging and casting for them with classic micro jigs and small soft plastics will most likely do the trick in no time at all!

You can find a set of deadly crappie baits perfect for fishing during the spawn on Amazon here.

Make sure to target crappie with very light gear, like an ultralight to a medium-light spinning rod and reel combo.

It will allow you to cast your light baits with more precision than a heavier setup and present them much more effectively!

PRO TIP: Try out a bobber rig instead if you’re having difficulties jigging close to cover and frequently getting snagged. It’ll allow you to keep your bait in the hot zones much longer! You can grab a few crappie bobbers on Amazon right here.

How Many Eggs Do Crappie Lay?

The difference in the number of eggs can be explained by the varying body shapes of the two crappie species, as black crappie tend to have a more compact and rounded body shape than white crappie, which typically have a somewhat more stretched body.

In other words, the stomach of the black crappie is simply a little roomier than that of the white crappie.

Where Do Crappie Go After They Have Spawned?

Once the crappie are done spawning, the females will swiftly leave the shallows and head back out into deeper water to regain their energy and feed, while the males stay behind to guard the eggs.

Once they have scattered, anglers will have a harder time locating them, which is why the fishing during the spawn is so popular, as it’s just so much easier to spot and catch them!

PRO TIP: Want a visual fact sheet on the crappie spawn instead? Then check out the related Google Web Story here!

Can Crappie Spawn More Than Once a Year?

Even though anglers sometimes state that they have observed out-of-season crappie spawning activity, crappie can only spawn once a year.

These observations and statements are most likely based on smaller groups of fish that must have missed the major crappie spawn and hence do their own thing after the bulk of the crappie have already left their spawning grounds.

That happens and is most likely more common than most people think.

Additionally, anglers have caught female crappie carrying eggs way after the spawning season during spring, leading them to believe that a second spawning season must be imminent.

However, early egg production in fish can occur frequently and in many species.

I have caught both carp and pike in August, which already had an impressive amount of eggs.

I believe those fish can carry their load all the way through winter and into next year’s spawning season before the eggs start to mature.

It’s rare, but it can and does happen!

White Crappie vs. Black Crappie (How to Identify Them)
← Previous
When Do Pike Spawn? (Times, Temperatures, Locations)
Next →