How Do You Know if a Pike Is Male or Female? 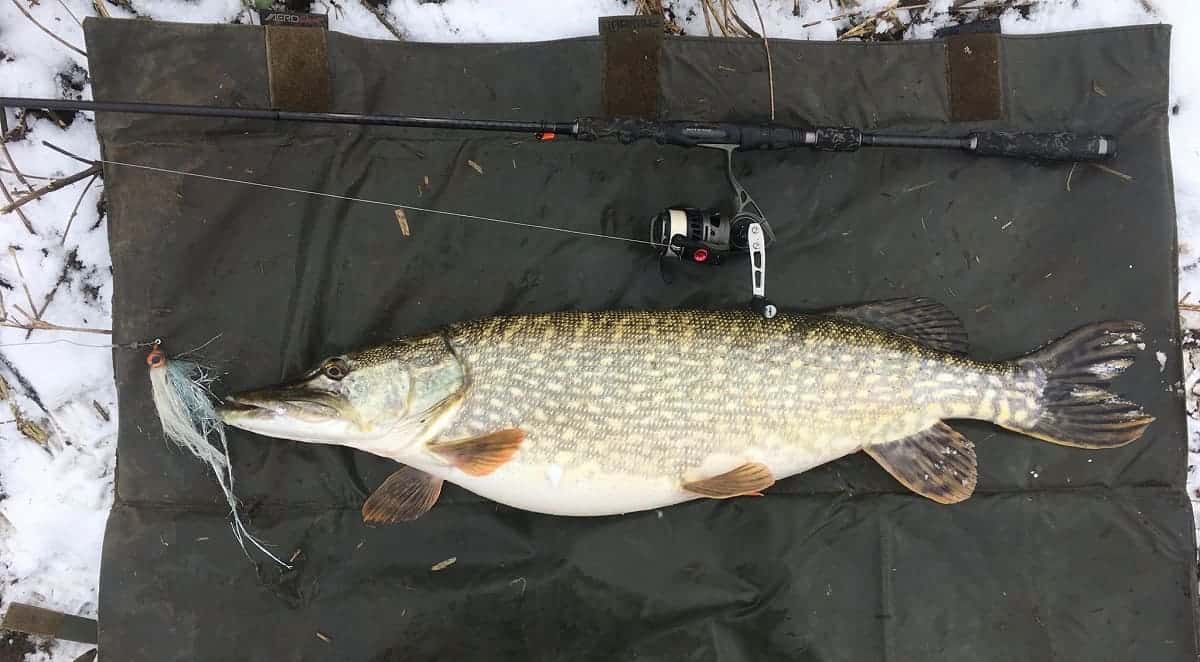 When it comes to pike, telling the difference between male and female is anything but easy. There are certain things to look for, but they are not at all obvious if you don’t know about them, especially if you are new to pike fishing.

So, I wrote this article in order to answer the all too common question: how do you know if a pike is male or female.

Male pike generally only grow to a size of about 30-35 inches. More or less all pike that are bigger than 40 inches are female. The most accurate way of sexing pike is by checking the urogenital opening, or vent. Females have a wider one, while males have a much narrower opening.

Continue to read this fact-based article and find out all the ways of knowing the difference between a male and a female pike.

Difference in Size of the Urogenital Opening

The absolute best and surest way of telling the difference between a male and female pike is by examining the size and shape of the urogenital opening, most commonly referred to as the vent.

According to studies, this method has an accuracy of more than 90% and is used as the number one way of sexing northern pike by researchers. More precisely, the urogenital technique was used to correctly determine the sex of 91% of males and 94% of female pike.

As these tests were carried out throughout the entire year, it’s a clear indication of how accurate this method really is.

So, if you want to determine the gender of the northern pike you have caught, this is, by far, the best way of doing so.

The female pike’s vent will also often be shaped like a V, while the male’s vent will simply look like a very thin slit.

During early spring, when the spawning season draws near, the color of the female’s vent will often turn pinkish. The male’s vent’s color can instead turn blue or purple.

Another rather accurate way of telling male and female pike apart is by checking their actual body size. Of course, this will only apply to bigger specimens.

Male pike are smaller than female pike, as is the case so often in the world of fish. The vast majority of male pike will reach a maximum size of about 30 to 35 inches and a maximum weight of approximately 15lb.

So if you want to determine the pike’s gender via its weight, make sure to always have a scale with you when you’re out on the bank! You can check out my favorite fishing scale on Amazon here.

On the contrary, female pike can grow to a much larger size, and virtually every fish above 35 inches is a female one. This means that each and every record northern pike that has ever been caught was female. Sorry pike dudes!

PRO TIP: You can find a visual summary of this article in the related male vs. female pike web story!

Starting at some time during the fall, and throughout the winter and spring season, you will have an easy time sexing pike, as there will be obvious pre-spawn indicators to look for.

When catching a male pike during the colder months of the year, it will often secrete a white fluid. This is the fish’s milt, which is already being produced well before the actual spawning period, which is usually taking place sometime during the month of April.

Similarly, a female pike will excrete small amounts of its eggs, which are of a yellow or orange color.

The closer the spawning season gets, the more eggs the female will produce. This will make its belly much fatter, which is yet another sure way of telling female pike from their male counterparts.

RELATED ARTICLE: Want to read up on the pike spawn? Then check out this article as well!

Fighting Behavior on the Rod

This last fact is not backed by scientific observation but rather based on my and other anglers’ personal experience. Years and years of pike fishing and hundreds of catches have shown that male and female pike often fight differently on the rod.

Male pike often fight more aggressively and out of control after being hooked. They will swim hither and thither, seeming somewhat aimless and panicky and frequently and violently shake their heads during the fight.

On the other hand, female pike are often much calmer and more reserved when being reeled in.

As they are often bigger and/or heavier than the males, they will use their weight to their advantage, often charging off into the depth and pressing rod and line rather hard.

Out there, they will then swim calmly and steadily, making it more difficult for the angler to gain line.

Again, these are simply personal observations and experiences, but I think many of you anglers out there will recognize these behaviors.

RELATED ARTICLE: Want to read up on the most suitable landing nets for northern pike? Then make sure to check out this article as well!

The northern pike is a predatory fish that has a long and torpedo-shaped body, which makes it a highly efficient and fast hunter.

This body is most commonly olive-green in color and covered by white dots or bars.

The pike has a rather big head and mouth, and its jaws can be opened extremely wide in order to swallow prey of considerable size.

The mouth is filled with up to 700 razor-sharp teeth that can bite through and shred both fish and fingers if you are not careful. Make sure to always use long-nose pliers when unhooking a pike!

Northern pike have an average size of 15 to 35 inches, but often reach a length of more than 40 inches and exceed a weight of 30lb. So, for those larger specimens, you will need a big landing net in order to be able to safely land them.

RELATED ARTICLE: What Do Pike Eat? (Preferred Prey and Baits)

If you want to read about even more interesting facts on the northern pike, such as record sizes, its geography, its razor-sharp teeth, or how to fish for it, make sure to also check these related articles I have written:

Do Carp Have Teeth? (Interesting Fish Facts)
← Previous
How to Tell if a Carp Is Male or Female
Next →
Click here to cancel reply.