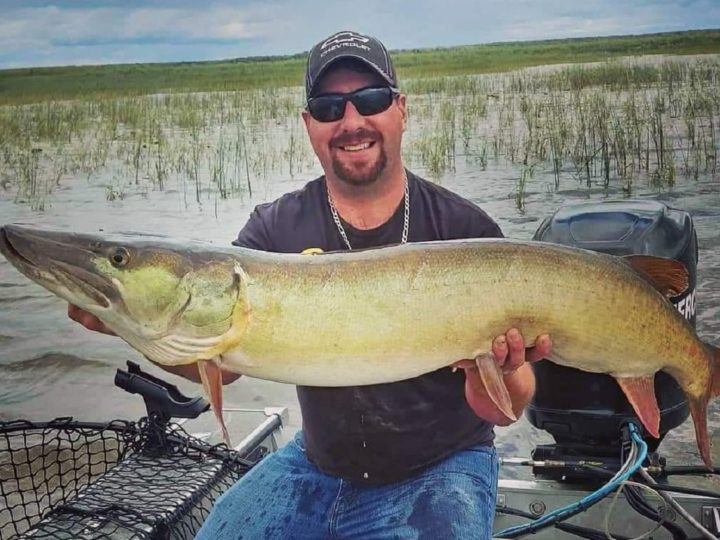 Many predator anglers shy away from stained water conditions when it comes to musky fishing. But with the right types of lures and suitable colors, musky fishing in muddy water can be immensely effective!

When fishing for musky in murky water, go with lures that produce a lot of sound and vibration. Topwater lures, wobbling crankbaits, and double-bladed bucktails all work great in such conditions. When it comes to lure colors, both white, chartreuse, and black have proven most successful.

Continue reading this article if you want to improve your musky fishing in muddy water!

DISCLAIMER: The lure tips and secrets revealed in this article were provided by

How to Catch Muskie in Muddy Water?

Like the northern pike, the musky is a highly visual predator, using its large, well-developed eyes to locate its prey.

Of course, such excellent eyesight is pretty useless in low visibility conditions.

And even though the musky can’t rely much on its vision in muddy water, it wouldn’t be such an awesome apex predator if it couldn’t put its other senses to use instead.

Besides sharp eyesight, muskie also have a highly susceptible lateral line that can pick up vibrations underwater from a great distance.

It is that sense the musky mainly uses to navigate through murky water to find and hunt prey. It’s also what you have to keep in mind when targeting muskie in such conditions, as it can make all the difference!

Using large and noisy lures that create a lot of sound and vibration will significantly improve your chances of hooking up to stained water musky.

On the contrary, using stealthier lures that tend to work well in clear water conditions might result in absolutely no bite at all.

It is then that many predator anglers give up targeting muskie in such conditions altogether, blaming it on the low visibility and waiting for the water to clear up instead of using the stained water to their advantage.

Because even though the fish’s ability to hunt is somewhat reduced in these conditions, it tends to move around more freely and carelessly than in clear water.

So, catching fish in muddy water can sometimes be easier than in clear water if you know what lures to use.

Let’s take a closer look at some of the most effective musky lures you should use in murky water!

What Are the Best Lures for Muskie Fishing in Muddy Water?

As I mentioned above, go for larger lures that make a lot of noise and produce a lot of vibration. The more movement and sound your lures make, the easier it’ll be for the muskie to pick them up and hunt them down.

The good news is that you can target murky water musky both on the surface and in greater depths.

Once again, the dark water means that they can roam around more freely and use the entire water column for hunting prey.

And so, you should bring a variety of shallow and deeper going lures with you. Some of the most effective ones include the following:

Topwater lures, such as the classic Whopper Plopper, are perfect for shallow muskies in dirty water.

With their lively movements, splashings, and powerful chops of their tail, they manage to attract a lot of attention from predators both nearby and further away.

The feeling you get when you suddenly spot a musky breaking the water surface to devour your Whopper Plopper is just indescribably!

If you want to troll for stained water musky, your best bet is a large, wobbling crankbait that’ll move a lot of water.

The Musky Mania Jake is a prime example of such lures. Its big, high-impact lip causes the crankbait to wobble around like crazy, giving off a lot of vibrations and mimicking a sick or dying baitfish.

In other words, the perfect prey for musky in low visibility environments!

You can find the Musky Mania Jake on Amazon here

Double-Bladed Bucktails (for Casting or Trolling)

And finally, the double-bladed bucktail spinner. The heavyweight Musky Double Cowgirl is, by far, one of the most popular stained water lures among musky anglers in North America.

Everything about this bucktail screams big fish and tons of vibration:

No matter if you’re throwing this lure or trolling it, you’ll be sure to hook up to some monster musky out there in the murky depths!

Keep reading to find out what the best lure colors for musky in muddy water conditions are!

I asked 100 musky anglers for their preferences for colors for musky lures in muddy water. Here is how they voted:

Now you may think: Well, flashy colors like chartreuse and white make total sense, but black!?

I get your confusion! However, black as a lure color for murky water makes a lot of sense as well because, while not directly visible in dark water conditions, the color black creates a powerful and visible silhouette.

And so, while bright colors, such as chartreuse and white, can work great in lightly stained water, black always tends to perform best in heavily colored and muddy water conditions with extremely low visibility.

So, depending on the condition of the water you are targeting, it’s always a good idea to bring all three colors with you when you head out to target stained water musky!

This way, you’re prepared either way and can hopefully get a few bites.

Is Muddy or Clear Water Better for Muskie Fishing?

This is a much-debated question that is hard to answer. Both conditions have their pros and cons, and both can either produce a lot of fish or utterly break you.

But if I had to choose, I would honestly have to say muddy water!

Muskies are apex predators with highly developed eyesight, and catching them in high visibility conditions can be challenging.

Of course, it’s not impossible at all, and many anglers succeed brilliantly in such conditions as well! Once again, it’s all about your lure and color choices.

RELATED ARTICLE: Check out this article to get helpful tips for musky fishing in clear water conditions

But generally, stained water gives you that valuable advantage of cover and stealth.

Even though they can’t make use of their big, all-seeing eyes in stained water, they take advantage of the cover it provides, and they tend to hunt and feed in it fairly confidently.

You, the angler, can do so as well! And with the tips you’ve gotten from this article, you can now target muddy water musky effectively!

What Is the Best Ice Fishing Line for Lake Trout? (A Helpful Guide)
← Previous
Musky Fishing in Clear Water (Best Lures and Colors)
Next →