Shimano vs. Pflueger (Which Brand Is Better?) 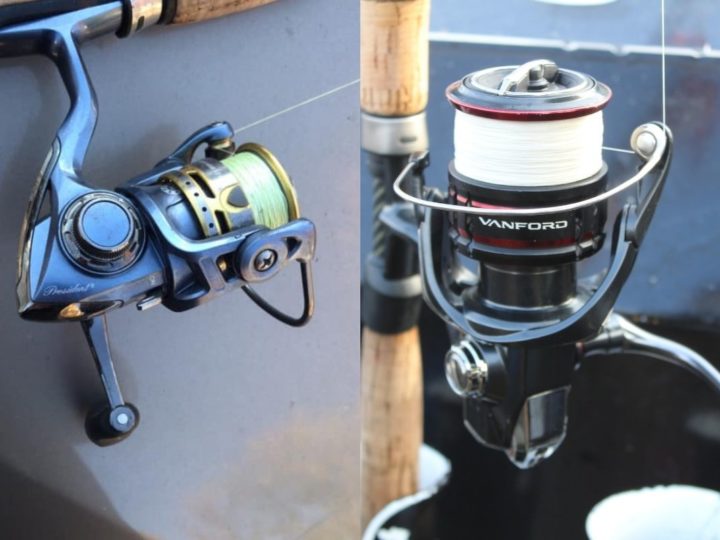 Both Shimano and Pflueger are two of the most popular spinning reel brands in the US and are used by millions of anglers around the country.

I wanted to find out which of those two A-class brands makes the better reels, so I researched online, asked a few hundred anglers, tested out the reels myself, and reached the following conclusion.

While most anglers regard Shimano as the overall best reel brand, Pflueger reels are generally seen as the best budget pick. The Pflueger President is, by far, the most popular spinning reel among American walleye, crappie, steelhead, and lake trout anglers.

Continue reading this article to find out more about Shimano and Pflueger reels, including their price ranges and some of their very best series.

PRO TIP: In a hurry? No problem! You can check out Pflueger’s incredible President spinning reel on Amazon right now.

It’s a top-of-the-line reel that is extremely durable, runs smoothly, and offers excellent value for the money.

Shimano or Pflueger: Which Brand Makes the Better Reels?

Both brands make great reels and are used by many anglers all over the US and Canada. Additionally, Shimano and Pflueger are generally very highly spoken of, making this brand comparison extra tough.

Usually, it’s much easier; Shimano pretty much always wins the race! And why not? After all, it’s one of the world’s biggest and most innovative reel manufacturers, and many of their reel series are top-of-the-line gear!

However, if Shimano has one weakness, it would be just that innovation and high-end gear!

Because even if many anglers fish with Shimano reels, and almost all of them consider Shimano to be the creme de la creme of fishing reels, not all anglers actually need such expensive high-end gear for their fishing.

And that’s where Pflueger comes in! Pflueger fishing reels, especially their ultra-popular President series, have good quality and durability and sell at a very reasonable price.

Pretty much all the anglers who use Pflueger reels value the following features in them above everything else:

In other words, Pflueger reels have everything a quality spinning reel needs while selling at a lower price than most other brands.

Honestly, every forum or Facebook group I visit, every angler I talk to, and every fishing guide tells me the same thing:

Pflueger reels are the best spinning reels for the money. Within this price range, it’s practically impossible to find a better reel!

So if you’ve already got the ideal reel for a great price, why bother going for something else, right?

Roughly 6 out of 10 American anglers reason the same way, according to the polls I ran in various fishing groups on Facebook:

So to conclude, roughly 60% of the anglers in the US prefer Pflueger reels over Shimano reels (that’s for walleye, crappie, steelhead, and lakers).

That still means that roughly 40% prefer Shimano reels. And don’t get me wrong here; quality-wise, they will always be the top pick!

But when it comes to entry-level gear, budget gear, second-tier reels, or whatever you want to call them, Pflueger takes home the prize.

RELATED ARTICLE: What Are the Best Reel Fishing Brands?

What Are the Best Pflueger Spinning Reels?

And here we finally have it: the Pflueger President! This amazing spinning reel is the top pick of millions of walleye, crappie, steelhead, and lake trout anglers.

It has an excellent performance, a beautiful design, and a lot of strength, making it suitable for bigger predators, such as northern pike, as well!

Some of its best specifications include the following:

The perfect reel for any spinning job and, in its price range, the best reel for the money!

While most people associate Pflueger with their President series, they also make other great spinning reels.

The Trion is definitely one of them. This super-compact and smoothly running reel is available in sizes 20 through 40, although most anglers use a 20 or 25.

Trions are a popular pick among panfish, trout, and ice anglers, and one of this reel’s biggest advantages is that it sells at an even lower price than the Presidents.

For being such a small second-tier reel, it has a lot to offer, and if you’re looking for a smaller-sized spinning reel, you should most certainly take a closer look at this little wonder!

You can find the Pflueger Trion on Amazon here

What Are the Best Shimano Spinning Reels?

Naturally, I also wanted to include Shimano’s very best spinning reels, so here they are.

To me, the number one Shimano reel would be the Vanford. It’s a high-end spinning reel that still sells at a very affordable price and has a ton of really awesome features to it.

I own a Vanford 1000 myself and couldn’t be happier. Thanks to the high-quality materials Shimano uses, this is a super well-performing and powerful spinning reel that runs unbelievably smoothly.

PRO TIP: Just want a quick visual summary of this article? Then check out the related Shimano vs. Pflueger Google Web Story!

Of course, the price of the Vanford reflects its overall quality and high performance, which is something to be aware of.

But once again, if you’re after a top-of-the-line spinning reel of the highest quality, the Vanford is your best choice, and it’ll be well worth the money!

Another flagship of Shimano’s is their Stradic.

This awesome spinning reel has it all; it casts and winds as smooth as butter, is extremely light, and probably has one of the best drag systems you’ll ever encounter.

I find that it goes exceptionally well with braided line, which makes it an excellent jigging reel, in my opinion.

As is the case with all Shimano reels, the Stradic also has incredible durability.

You definitely get the best value for the price here.

I’ve got fishing buddies who’ve fished with their Stradics for more than ten years. Their reels are still as good as new. And those guys use their gear a lot!

All in all, one of Shimano’s finest creations! The Stradic is a reel that can wear the brand name Shimano with absolute pride and justification!