Shimano vs. Daiwa Reels (Which Brand Is Better?) 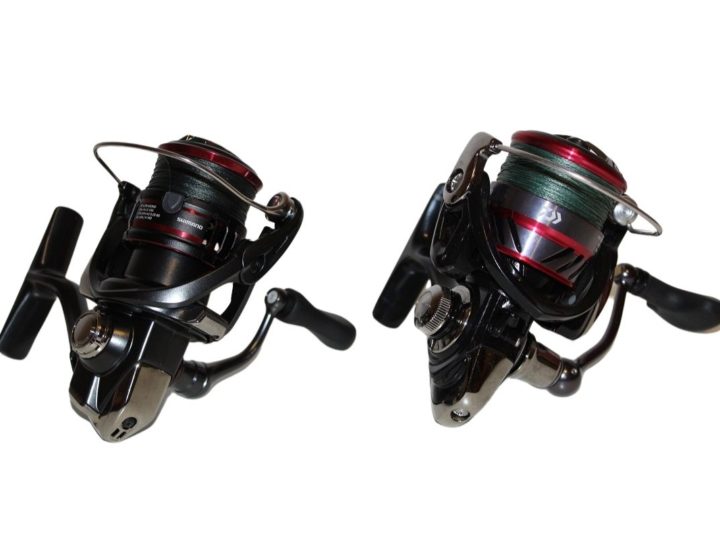 Today’s fishing market is saturated with brands that all claim to be the best of the best. The market is divided between the traditional mega-brands and the new blood trying to establish themselves.

One is not inherently better than the other, but those traditional manufacturers have huge reputations and are known to create quality gear, which is one of their biggest advantages.

Two of these well-known brands are Shimano and Daiwa. These are two Japanese fishing gear manufacturers that have been in the game for a very long time. But, which one makes the better reels?

Both Shimano and Daiwa are top-of-the-line reel brands and very similar in terms of quality, material, and practicality. Shimano edges out Daiwa if shove comes to push, but both are solid choices and better than most other reel brands out there.

If you want to learn more about this much-discussed topic and read up on Shimano and Daiwa, all you have to do is keep reading!

Shimano or Daiwa Reels: Which Is Better?

This question has dominated plenty of forum and Facebook group discussions over the years, and it’s tough to say which is the better brand as both are extremely popular among anglers.

I don’t know how many online discussions I have read and had about this very topic, and the opinions always tend to vary, even though one brand usually sticks out in every thread.

But making an endorsement does not discredit the other as both produce top-notch fishing reels. That’s definitely something to keep in mind here!

With that being said, Shimano is generally considered to be the better brand of the two. It also happens to be my personal preference!

I even made a poll in a big US Facebook fishing group, asking anglers which brand they preferred. A total of 600 of them voted and here is the result:

The key for many, including myself, is durability and smoothness.

Shimano’s reels are well-known to last a very long time. And even though most models are slightly more expensive than Daiwa reels, that extra money is almost always well invested!

I own Shimano reels that I’ve had for well over ten years and fished with extensively. They still run like clockwork and as smooth as ever.

This brings me to the second aspect; the smoothness of Shimano reels. Many of their models run butter smooth and without any types of hiccups when fishing with them, which gives you, the angler, a fantastic gear experience.

One of Shimano’s most popular spinning reels, the Vanford, which will be discussed in more depth further down in the article, is an excellent example of that.

But, all this does not mean that Daiwa reels are inferior pieces of gear. Not at all!

And even though Shimano reels often outperform Daiwa reels, they still both play in the top league of fishing reels!

While some Daiwa reels won’t last as long as Shimano’s and tend to lose some of their smoothness over the years, I still like them for their general top quality and, more importantly, for their hard-to-beat price!

I’d say the fact that Daiwa reels, especially their lower-tier models, almost always cost less than Shimano reels of the same caliber makes them a solid budget pick and a great choice for beginners or anglers with a limited budget.

The very affordable Daiwa Revros can be mentioned in this regard. This reel will also be discussed in more detail further down in the article.

Let us now look at some of Shimano’s and Daiwa’s most popular reel series!

When looking at all of Shimano’s baitcaster reels, the Curado DC 150 is without a doubt one of their finest reel models.

It’s a high-end, technologically advanced, and extremely popular low-profile baitcaster of excellent quality. The Curado is a superb model that delivers superior performance for the price.

This Shimano baitcaster features the popular Infinity braking system, the Shimano Stable Spoon design, and many other advanced technologies.

I own a Vanford 1000 myself and love this reel! I use it mainly for spinning, jigging, and drop shotting, and it’s simply the best.

This is without a question one of Shimano’s very best spinning reels, and even though it’s a high-end purchase, it’ll be well worth your money!

Personally, I’ve never owned a reel that has run smoother and more precisely. I would almost go as far as to call this reel a piece of art! Fishing with it really is an incredible experience.

If you want to find out more about the Shimano Vanford, you can find it on Amazon here

What Are the Best Daiwa Reels on the Market?

One of Daiwa’s absolute top baitcasters is the Tatula series.

This is a reel model that is constantly being upgraded and innovated. It’s a more than solid baitcaster that features some of Daiwa’s most popular features to date.

These include a swept handle, a soft-touch knob, reinforced brass gears, and the well-known T-Wing level wind system.

It’s a solid choice for both deep cranking, punching, or flipping for bass.

Although there is a Tatula spinning version, the Daiwa BG is pound-for-pound the best spinning reel under the brand’s umbrella.

Although technically a saltwater reel, it’s perfectly suited for freshwater fishing as well and can be called a true allrounder!

This spinning reel has a lot of backbone and precision, making it an absolute joy and a reliable piece of gear.

Shimano vs. Daiwa: Which Brand Is Cheaper?

Both Shimano and Daiwa have plenty of budget and high-end reels that sell at different prices. When it comes to lower-tier reel models, Daiwa is almost always the cheaper brand of the two.

I think a question like that is especially relevant for beginners or anglers with a limited amount of money to spend.

I’ve been there myself and know how hard it can be to find a satisfying answer to this question! That’s why I wanted to include a section like this in the article!

So, if you’re just starting out or you don’t have the money for higher-end gear, your best pick would be Daiwa. And that holds true for both spinning reels and baitcasters!

Here is a list of Shimano’s and Daiwa’s cheapest reel models that show you the price difference. You can check them out on Amazon if you want to take a closer look:

To conclude, Daiwa offers both cheaper spinning and baitcasting reels and is probably the more suitable alternative for beginners and limited budgets.

Does that mean you’re going for a reel of lower quality then? Not at all! I own several budget Daiwa reels myself (both the Ninja and the Revros) and have fished with them for many years.

They don’t quite reach the quality level of a Shimano, but they are, nonetheless, top-notch fishing reels that will last you a very long time if you treat them well!

RELATED ARTICLE: Which Brand Is Better: Shimano or Abu Garcia?

Histories of Shimano and Daiwa

Fairly quickly, the company’s main focus was on bicycle parts, which brought the Shimano huge growth and international fame over the coming decades.

It was not until the 1970s that Shimano introduced its first-ever spinning reel and entered the global fishing market.

Since then, the company has become one of the world’s most successful and biggest fishing gear manufacturers.

In 2021, Shimano celebrated its 100th anniversary and is still growing stronger every year.

Daiwa was founded in 1958 and jumped into the fishing world right away.

While starting as a relatively small reel maker, the company quickly grew into a global tackle brand, supplying anglers worldwide with quality gear for various disciplines and target species.

Since the company was founded, Daiwa has continuously innovated itself and managed to push the industry toward the future.

Although Daiwa has undergone a few logo changes, people continuously think of quality and ingenuity when thinking about this fishing brand.

PRO TIP: Check out this article as well if you want to read up on Daiwa’s fishing reels and where they are made!

Especially in Asia and North America, Daiwa and Shimano are giants in the fishing industry.

Both are constantly pushing the envelope for development and technological advances.

Although we pick Shimano as the slightly better brand, you cannot go wrong with either brand.

With world-renowned reputations and excellent products, Shimano and Daiwa are top-notch brands, with Shimano providing a slightly better product.

PRO TIP: Get a quick visual summary of the article via the related Shimano vs. Daiwa Google Web Story!

Ice Fishing on Mille Lacs Lake (Everything You Need to Know)
← Previous
How Far Do Salmon Migrate? (Learn About the Salmon Run)
Next →