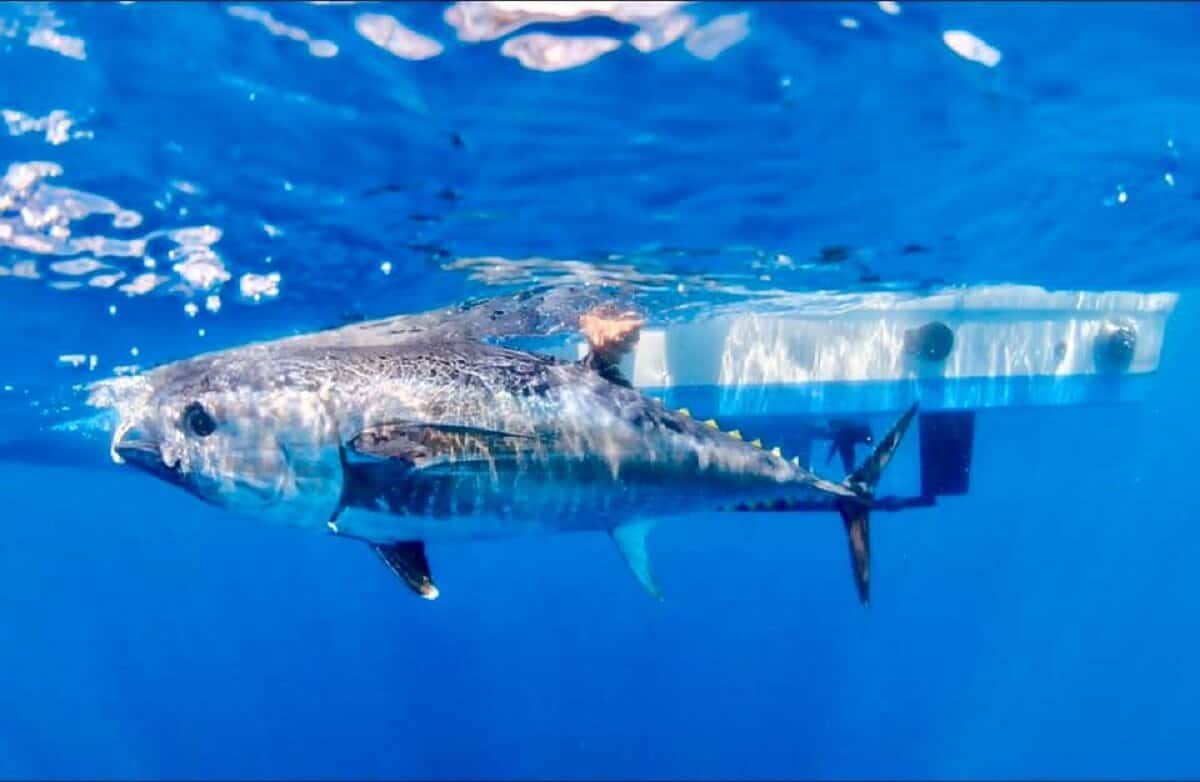 The Atlantic bluefin tuna (Thunnus thynnus) is a fascinating saltwater predator and one of the world’s absolutely fastest swimming fish. As an angler and a friend of the ocean, I have always been very interested in this amazing fish, which is why I wrote this in-depth species guide.

The Atlantic bluefin tuna is a torpedo-shaped predatory saltwater fish species. It is native to both the Western and Eastern Atlantic ocean, as well as the Mediterranean Sea. Fully grown specimens can reach a length of more than 10ft and a weight of more than 1000lb, making it both a highly popular game and food fish.

Keep reading this article and find out all the interesting and awe-inspiring facts about the Atlantic bluefin tuna.

PRO TIP: And make sure to check out this book on Amazon on the most up-to-date scientific research on giant bluefin tuna.

The body shape of the Atlantic bluefin tuna is perfect in its aero- and hydrodynamics, making it a highly efficient and very fast swimmer.

While the body itself is rhomboidal in profile, the tuna’s head is conically shaped and has an abnormally large mouth. It is due to its mouth that it can swallow very large prey fish.

In comparison to the rest of its body, the tail is rather narrow and slim.

Its fins are shaped and positioned to further aid the body’s aerodynamical and hydrodynamical features.

Above and below its main body, it has large sickle-shaped fins; the median fins. It is actually able to move these with the help of hydraulic pressure, allowing for ultra-fast maneuverability and hunting.

Furthermore, its large and powerful crescent-shaped tail fin enables the bluefin tuna to reach rather high speeds while swimming.

As the Atlantic bluefin tuna is the largest member of the tuna family, its average length and weight are rather considerable.

Fully mature fish have an average length of about 5 to 8ft and an average weight of between 400 and 600lb.

Interestingly, a survey that included adult specimens up to 550lb concluded that none of the fish could have been much older than 15 years, indicating that the Atlantic bluefin tuna is a fast-growing fish species (even though it is said to be the slowest growing member of the tuna family).

On the contrary, really big specimens of 800 to 1000lb and above are believed to be 50 years or older.

Bluefin tuna have a dark blue, sometimes even blackish back, and a greyish belly area. This color combination makes that the tuna is well camouflaged in its often similarly colored environment.

To make it even more beautiful, it has a golden coruscation that more or less covers its entire body, making it appear rather shiny and glittering.

To top it all of, its caudal fins are colored in a strong yellow.

On the other hand, their oily, highly sought-after meat is often of an extremely dark red color. More on the tuna’s exquisite meat further down in the article!

The bluefin is equipped with rows of very sharp teeth along its upper and lower jawline. These teeth are needle-like and considerably small when compared to the fish’s body size.

Where Can Atlantic Bluefin Tuna Be Found?

The Atlantic bluefin tuna is divided into two main stocks that can be found in the Western and Eastern parts of the Atlantic ocean.

The Western stock can be found all along the East coast of the United States and Canada, but it doesn’t stop there.

In fact, it can be found from Newfoundland in the north all the way down to the Gulf of Mexico in the south.

The Eastern stock can be found both in the northern parts of the Eastern Atlantic, off the coasts of Great Britain, France, Germany, Denmark, Norway, and Sweden, as well as in the Mediterranean Sea in the south.

Once, there were bluefin tuna in the Black Sea as well, but, rather unfortunately, they have become extinct in that part of the world.

How Big Do Atlantic Bluefin Tuna Get?

The Atlantic bluefin tuna is the biggest member of the wide tuna family and can reach respectable sizes. On average, fully matured specimens can reach a length of over 10ft and a weight of over 1000lb.

However, research suggests that the Western Atlantic bluefin has the potential to reach an astronomical length of around 13ft and a weight of up to 2000lb.

This theory is supported by the fact that the Western tuna stocks have both access to a rich abundance of prey fish and that they live in slightly warmer water temperatures.

What Is the Biggest Atlantic Bluefin Tuna Ever Caught?

The largest bluefin tuna ever caught on rod and reel weight a massive 1.496lb and measured 12ft in length It was caught by fisherman Ken Fraser off Nova Scotia back in 1979.

To this day, this mammoth is the largest ever tuna recorded by the International Game Fish Association.

As it took Fraser only 45 minutes to land this world record, it is also known as one of the most iconic catches of all time.

What Do Atlantic Bluefin Tuna Eat?

Both young and adult bluefin tuna are predatory fish that are largely opportunistic when it comes to their food, meaning they can and will eat a large variety of prey.

Did You Know? Cannibalistic behavior can be observed in bluefin tuna larvae.

Thanks to its aerodynamic body shape, muscle dynamics, and fin structure, the bluefin tuna is able to swim as fast as 43mph.

In fact, the bluefin tuna is listed among the top six fastest fish in the world. A study researching the bursts of speed of Atlantic bluefin tuna measured a top speed of a staggering 43.4mph.

This ability to reach such high speeds is also aided by the tuna’s large and powerful heart, which can pump blood into all its muscles very quickly, thereby activating them in no time at all.

Where do Atlantic Bluefin Tuna Spawn?

Did You Know? Although Atlantic bluefin tuna may forage widely across the ocean, they will always return to their respective breeding grounds, where they themselves once were born.

Here, they gather in huge schools that are well visible in the clear ocean water. So much so that the bluefin tuna spawning has become somewhat of a tourist attraction.

But this fact also makes them highly vulnerable to commercial fishing activity during that time, which is why these areas are either closed off or gear restricted for fishing boats.

Atlantic bluefin tuna only spawn once a year, between the months of April and June.

It takes an Eastern Atlantic female bluefin tuna approximately 5 years to reach maturity, and a Western bluefin female around 8 years, which is when it will be able to first produce and lay eggs.

How Many Eggs Does an Atlantic Bluefin Tuna Female Lay?

According to the latest research, on average, a bluefin tuna female can lay 10 million eggs. Of course, the amount of eggs depends on the respective female’s age and size; the bigger the female, the more eggs it will be able to produce and lay.

The eggs are fertilized in the water column and start to hatch after only 2 days!

It is due to the cannibalistic behavior of the larvae, as well as various predators, that the tuna’s evolution has led to such an extensive egg production, so that more juvenile fish may grow into adult specimens.

How Many Atlantic Bluefin Tuna Are Left in the World?

And even though the numbers are rather disheartening when compared to the stocks of the 1950s, which was just before commercial fishing for giant bluefin tuna started, things are actually improving now!

After decades of being an endangered or near-threatened species, the Atlantic bluefin tuna is since 2015 considered to be a vulnerable species, which means that the stocks are slowly but steadily increasing and getting more robust.

This is mostly thanks to very, very hard work and determination of various fisheries and their management, researchers, and environmental organizations that put in place new laws, regulations, and restrictions ( in the form of annual quotas and minimum catch sizes) in order to first raise awareness and then turn the tide.

The previously cited study from 2019 suggests that, from the year 2015, there has been a substantial increase of the spawning stock biomass of the Atlantic bluefin tuna.

This increase is ongoing, which is very good news for the Atlantic bluefin tuna and its future. However, the further extent of this stock growth is entirely depending on the continuation of fishery management and regulations in the near future.

Only if these efforts and measures are kept in place will the Atlantic bluefin tuna, perhaps, be able to return to its former glory and abundance.

Don’t miss the in-depth article on this much-debated topic: Are Bluefin Tuna Endangered?

Thanks to current regulations and restrictions, it is illegal to catch Atlantic bluefin tuna via methods other than rod and reel, hand lines, or harpoons.

Both the NOAA and the European Union have realized the necessity of strict fishery management for the bluefin tuna, as the stocks remain highly vulnerable to overfishing.

Furthermore, fishing for and catching Atlantic bluefin tuna in their breeding grounds in the Gulf of Mexico and the Mediterranean Sea is also illegal, both during and outside of the spawning season.

Unfortunately though, due to the fish’s extreme value, illegal fishing for bluefin tuna remains a big problem that is hard to tackle.

Just to give you an example; in 2018, 76 “fishermen” were arrested in Spain for being involved in illegal fishing and trading of bluefin tuna worth over €12 million annually.

The authorities managed to confiscate no less than 80 tons of illegally caught bluefin tuna.

Of course, this can only be regarded as the tip of the iceberg and illegal fishing activities like these continue to pose serious threats to sustainable bluefin tuna fisheries in the future.

On the other hand, there is also plenty of legal and regulated fishing and sportfishing for tuna going on, which, of course, is a much more sustainable way of catching them.

Why Is the Atlantic Bluefin Tuna so Expensive?

In Asia, more specifically in Japan, the bluefin tuna is an absolute delicacy and served as sushi in super-expensive restaurants all over the country.

Japan stands for a staggering 60-80% of the global demand for bluefin tuna and has hence an enormous appetite for this type of fish.

However, this hasn’t always been like that. The Japanese sushi trend first started back in the 90s. Prior to that, bluefin tuna was regarded as cat food by most people, both in Japan and elsewhere in the world.

But since that time, sushi has become a luxury food for the very rich and is the perfect example of an unnaturally high and inflated market.

It is only if and when this trend will pass that the stocks can truly start to recover. Time will tell if that will be the case rather sooner than later.

How Much is a 1000lb Atlantic Bluefin Tuna Worth?

In Chinese and Japanese food markets, Atlantic bluefin tuna fish can sell for around $40 per pound, which would equal a price of $40.000!

However, at the beginning of the fishing season, demand is usually at its highest, which often translates into much higher prices per pound.

During these periods, one pound of Atlantic bluefin tuna could theoretically sell for $200, sometimes even more than that!

It is mostly because of these highly inflated prices that the species is facing difficulties to remain at sustainable levels.

Ice Fishing in Minnesota (A Complete Guide)
← Previous
Walleye vs. Zander (Similarities and Differences)
Next →
Click here to cancel reply.