Barracuda vs. Wahoo (How Are They Different?) 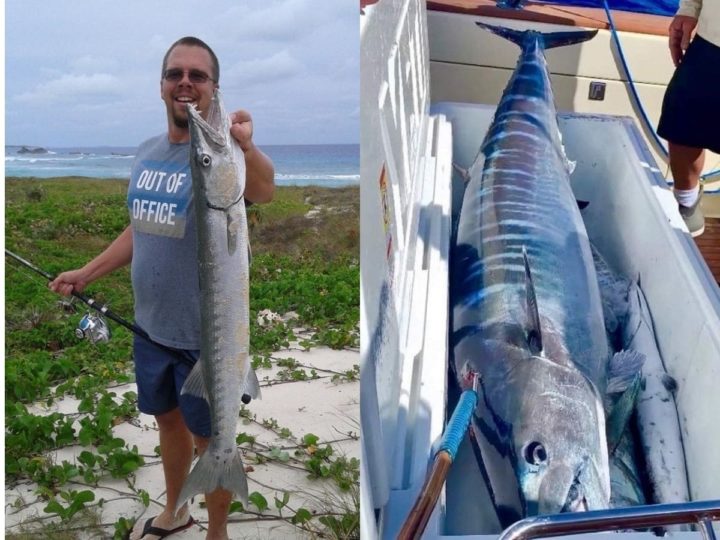 Barracuda and wahoo are two entirely different species that nonetheless have a lot in common. Due to the fact that they pretty much share the same habitats and look pretty similar, it can actually be fairly difficult to tell them apart.

That’s why I wrote this in-depth article on the interesting topic of barracuda vs. wahoo.

Despite their similar appearances, barracudas and wahoo actually belong to two completely different fish families. The barracuda is the more fearsome-looking of the two and has big, fang-like teeth, while the wahoo only has small needle-like ones. The wahoo also has a much longer dorsal fin.

Continue reading this article to find out all the differences and similarities between these two awesome saltwater predators.

What Is the Difference Between Barracuda and Wahoo?

Let us dive right in and take a closer look at the barracuda and wahoo. If you keep the sections below in mind when you’re out fishing, it’ll be way easier for you to tell the two predators apart and to easily and correctly identify your catch!

Similarly to length, the wahoo also takes home the weight trophy, as it can weigh significantly more than the barracuda.

The wahoo has an average weight of 15 to 40lb and can reach a maximum weight of just over 180lb.

On the contrary, the barracuda has an average weight of only 5 to 20lb and reaches a maximum weight of a little over 80lb.

This is a more subtle difference between the two species! The barracuda typically has a blueish to greyish upper and silvery to white lower side.

On some fish, but not all, several dark or black cross-bars can occur along its upper side, which are accompanied by dark or black spots to blotches on its lower side.

While also having a blueish to dark-greyish upper and a silvery or whitish lower side, the wahoo has a more distinct pattern of bars along its flank.

This pattern of blue and dark or black bars is often very irregular, but very well visible and apparent.

This is another very obvious feature that separates the two species and makes it easy to tell them apart.

While the barracuda has two short dorsal fins that are well separated from each other, the wahoo’s first dorsal fin is several times longer than its second and will almost touch it, covering the majority of its back.

The barracuda also lacks the wahoo’s blade-like tail fin. Its tail fin is more of a rounder, curved, and moderately forked shape.

Both of these predators have a rather frightening and sharp set of teeth in their large mouths, but the teeth of the wahoo differ from those of the barracuda quite significantly.

Its teeth are very short, needle-like, and very closely set together.

The barracuda also has a set of these shorter teeth, but additionally to those, it possesses a set of very large, fang-like teeth that are used to grip and tear baitfish into pieces.

It is those large teeth of terror that the barracuda is so well known for.

RELATED ARTICLE: Make sure to also read this interesting article on everything about barracuda teeth!

While the barracuda and wahoo both belong to the same order of fish (Scombriformes), they do not share the same family or genus, making them two completely different species of fish.

Where Are Barracuda Found?

While the great barracuda can be found in most tropical and subtropical seas around the world, it is most commonly found in the eastern and western Atlantic, while being relatively rare in the eastern Pacific regions.

In the western parts of the Atlantic, it can be found from Massachusetts in the US all the way down to the coastlines of Brazil.

In these waters, the barracuda’s habitat is near coastal coral reefs and areas with a lot of seagrass and mangroves. They can however also be found in the open sea. Here, they mostly stick to the upper water levels near the surface.

Where Are Wahoo Fish Found?

The wahoo can be found in virtually all tropical and subtropical waters in the world and often in great numbers at that.

Furthermore, it inhabits almost the entire Indian ocean, from the east coast of Africa to the waters of southern India, Sri Lanka, and the Maldives, as well as parts of the Indo-Pacific and central Pacific oceans.

RELATED ARTICLE: Check out this article with tons of facts about wahoo teeth!

How to Fish for Barracuda?

Barracudas can be caught with both lures and live baits and as they are fairly curious predators, they’ll most likely attack anything you throw at them.

Both spin fishing and trolling along the edges of big reefs or seagrass fields can yield good results and many saltwater anglers swear by bigger crankbaits for barracudas.

Two very popular choices here are the Rapala X-Rap and the Yo-Zuri Crystal 3D Minnow, which you can check out more closely on Amazon.

Pro Tip: Even though barracudas are known for only biting the tail, it’s always a good idea to use a durable wire leader to prevent possible bite-offs. If those sharp teeth come in contact with your mainline, it’s game over for sure! You can find a strong and reliable wire leader for barracuda on Amazon here.

How to Catch Wahoo?

The best fishing technique for catching wahoo is high-speed trolling with either bigger saltwater lures or dead or live bait in the open sea.

The wahoo is an extremely fast swimmer, which is why retrieving your lures and baits at a high speed is highly effective.

Ready-rigged high-speed wahoo trolling lures are a very popular choice among saltwater anglers who target this species. Amazon has a great and colorful set of them if you want to check them out.

Another great lure for wahoo is the Yo-Zuri Bonita, which has an excellent high-speed performance that the wahoo finds irresistible. You can buy this awesome wahoo lure on Amazon here.

What Is the Biggest Barracuda Ever Caught?

The world’s biggest great barracuda (Sphyraena barracuda), which is the most popular barracuda species in the world, is a gigantic fish of 87lb 3oz. This fish was caught off the Christmas Islands (Kiribati) by angler Christian Loranger.

What Is the Biggest Wahoo Ever Caught?

The current wahoo world record (Acanthocybium solandri) is a magnificent fish of 184lb that was caught by angler Sara Hayward off the coast of Cabo San Lucas (Mexico) in 2005.

In Hawaii, around which this fish is quite abundant, the wahoo is called Òno, meaning “good to eat”. I have had freshly caught wahoo myself and can tell you that the taste is exquisite!

To my knowledge, the best way of preparing this fish is by grilling it right after it has been caught. Another popular way of preparing wahoo for the dinner table is by making sushi out of it.

The wahoo’s meat is of a healthy white color, a fairly firm texture, and has a mild and naturally sweet taste to it. These features make it especially delicious when consumed raw as sushi, which is definitely something I want to try!

PRO TIP: Get the visual summary of this article in the related barracuda vs. wahoo web story!

Can You Eat Barracuda?

While not being as tasty as wahoo, you can certainly eat barracuda nonetheless. Its meat is of a firm texture and contains a high amount of protein.

However, it is extremely important to only eat smaller amounts of barracuda meat at a time, as this fish is known for containing ciguatoxin. This toxin is produced by tropical algae that grow and breed near the reefs close to which the barracuda most commonly hunts.

The smaller prey fish consume the algae. And by consuming a large amount of prey fish, the barracudas then ingest and store the toxin in their meat.

The larger the barracuda, the more toxin it contains. This is why eating smaller portions of meat, or simply only eating smaller barracudas is the safest way to avoid ciguatera fish poisoning.

Barracuda meat is best grilled, fried, or steamed. Add some butter to the fillets or steaks and sprinkle some lemon or lime juice over it and you’ve got yourself a delicious cuda meal!

What Is the Best Weather for Carp Fishing?
← Previous
How to Catch Crucian Carp (A Complete Guide)
Next →