How Far Do Salmon Migrate? (Learn About the Salmon Run) 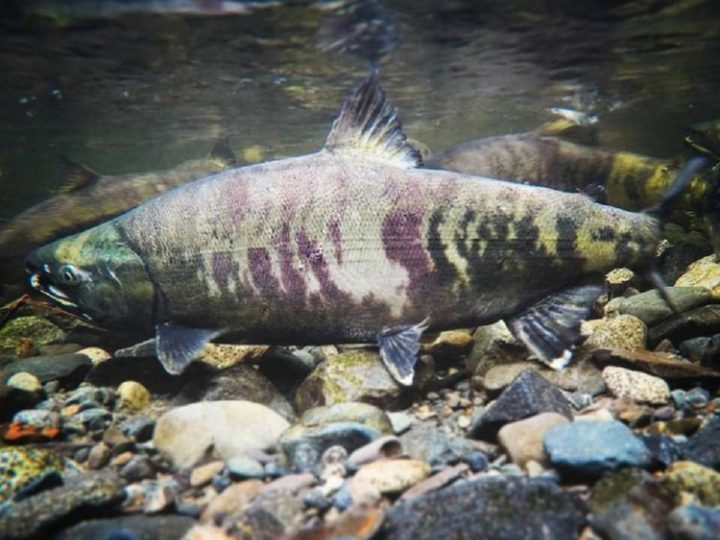 The salmon is a fascinating fish species that spends its life in both fresh and saltwater. They are born in freshwater, head out to the open sea, and then return to their natal rivers to spawn.

As I have always been wondering how far these fish can swim, I did some research and wrote this article on the interesting topic of salmon migration.

Salmon can migrate several thousand miles through the ocean to reach their freshwater spawning grounds. Depending on the size of their natal river, they can cover additional dozens or hundreds of miles swimming upstream.

Read on and learn more about the salmon’s extreme migration distance, how long the journey back to their rivers can take, and what obstacles the fish can meet on their way home.

All six types of salmon (one Atlantic and five Pacific) spend most of their adult lives in the ocean and will return to freshwater to spawn.

After a few months to a few years in their natal river systems, the hatchlings will leave their freshwater home and head toward the open sea.

Here, most of them will spend 2 to 3 years maturing before swimming back to their birthplace.

They can migrate up to 7,000 miles during a two to four-year period, depending on the location of their spawning grounds, which is an insane distance for a fish species, if you think about it!

While the Atlantic salmon will roam the Eastern and Western part of, you guessed it, the Atlantic Ocean, the Pacific salmon types tend to spend the majority of their adult lives in the Northern parts of the Pacific ocean.

Researchers have, however, suggested that they will most likely exploit different oceanic regions at various stages of their lives.

But the why and how of that navigation remains somewhat of a mystery to modern science.

Naturally then, Pacific salmon species (King, Sockeye, Pink, Coho, and Chum) born in the Northern parts of the North American or Asian continent will have to travel a much shorter distance back to their spawning grounds.

On the contrary, salmon born further down south, e.g., in the coastal tributaries of California, will have to cover a much longer distance to get back to their natal rivers.

We are talking about differences of several thousand miles here!

Not all salmon will begin their migration simultaneously, as different salmon species usually reach their home rivers during different times of the year.

While pink and sockeye can reenter freshwater as early as July, Chum and Atlantic salmon can arrive as late as November, or sometimes even December, depending on various factors such as weather, water levels, and currents.

RELATED READING: You can also read this article if you want to know more about the salmon’s different spawning periods.

Considering all of the obstacles salmon face in the hundreds to thousands of miles of travel they endure, it is a miracle any of them make it home to spawn.

How Far Do Salmon Migrate in the Ocean?

The thousand or more long journey back to freshwater isn’t the only long-distance travel the salmon undergoes, as they first have to make their way to their saltwater feeding grounds, which can be thousands of miles away from their home rivers.

This part of their lives is, without a doubt, the most vulnerable, as the fish are still relatively young and small, making them the perfect prey for various predators.

The fish that make the journey to the feeding grounds out there in the open sea don’t get much time to rest either, as the next two to three years they will be spending here consist of constant traveling in search of food.

Studies have shown that some tagged salmon have reportedly traveled more than 4,000 miles on their adult migration routes at sea. Once again, pretty incredible if you ask me!

How Far Do Salmon Migrate Upriver?

The longest salmon run in the world is undertaken by the king salmon in the Yukon River. Their river migration consists of a 1,800-mile long run, beginning in Alaska and ending in British Columbia, Canada.

It is the only salmon in North America that traverses through two different mountain ranges and one of very few in the world that includes two countries.

The longest sockeye salmon run in North America is the Columbia and Snake River run.

For comparison, this is the same distance as going from Miami, Florida, to Nashville, Tennessee.

Aside from a handful of incredibly long runs such as these, the average salmon river migration lies somewhere between 200 and 400 miles in larger river systems and 10 to 100 miles in smaller rivers.

The migration of salmon is pretty surreal, isn’t it! Especially when you consider the fact that, on average, less than 10% of the adult fish actually make it back to their spawning grounds.

Even more so when you realize that all Pacific salmon types and most Atlantic salmon die after spawning. Nature can be extremely fierce at times!

RELATED READING: Check out this article to know why salmon die after the act of spawning is done!

How Far Can Salmon Swim Upstream in one Day?

Depending on the species and water conditions, salmon can cover around 40 miles upstream per day.

Sockeye, coho, and king salmon are the better swimmers, as they can swim reach up to 45 miles a day depending on the condition of the waterway.

In contrast, pink and chum are typically on the weaker end of the spectrum, swimming, on average, covering around 30 to 35 miles per day if the conditions allow it.

There are, however, certain factors that could hinder a salmon from reaching those daily mileages.

Downpours that cause flooding can make specific routes impassable and dangerous, as logs and other debris can be washed downriver, leaving them stuck in one area until conditions improve.

On the contrary, too little rain may decrease the water levels of streams and smaller river systems, making the salmon’s way upstream far more difficult.

Theoretically, a salmon only needs a couple of inches of water to navigate through it. But such low water levels slow the speed of the fish down pretty drastically.

How Long Does it Take For Salmon to Swim Upstream?

Many factors come into play when it comes to the duration of a salmon run. At an average of 40 miles per day, the shorter runs can take as little as two weeks, given that there are few to no obstacles in the salmon’s path.

The longer runs, however, can last six to eight weeks. This has partly to do with the size of the river and the strength of its current.

Another factor of significance is the salmon’s worsening state of bodily deterioration during its journey upstream.

Once the salmon’s body begins to deteriorate, it’ll lose energy and slow down drastically to reach its final destination.

PRO TIP: Just want to know some quick facts about the salmon run? Then check out the related web story here!

What Obstacles Can Salmon Overcome During Their Migration?

The obstacles a salmon will face on its migration route back to freshwater are plenty, dangerous, all, unfortunately, all too often fatal.

During their travel through the ocean, they are always at risk of falling victims to various predators, such as orca whales, sharks, bluefin tuna, halibut, swordfish, and seals.

Once the salmon are closing in on the broader area of their home stream, they are trying to locate the scent of their natal river, using what’s commonly referred to as their smell memory bank.

But, if the river they are trying to find currently has a weak current or no current at all, they will have a tough time picking up that scent, as it won’t be carried down the river and washed out into the sea.

If that happens, the fish use their plan B and try to locate a similar river nearby, but all too often, they use up most or all of their energy reserves and die before they get there.

The salmon that do find their rivers and enter them successfully face yet another onslaught of various predators.

Everyone knows that bears will stand in the way of salmon returning home. They will stand posted on small waterfalls or shallow water to increase their chances of grabbing a leisurely lunch.

Eagles and wolves are other known predators of salmon migrating upstream.

Once in water shallow enough to slow the fish down, a wolf or eagle can grab as many of them as they wish.

And then, of course, there are humans, who are a significant obstacle for migrating salmon in rivers. Purse seiners outside of estuaries are the first human threat.

Gillnetters at the headwaters are the second deterrence they must fool.

Human-built structures, such as hydropower plants (yes, I said it!) and dams, culverts, or artificial waterfalls, can pose another severe obstacle that can block the salmon’s way upstream.

Lastly, sport anglers will pursue what is left. Although thankfully, an ever-growing number of sport anglers practice catch and release of pre-spawning salmon.

And to be fair, catch and release-based fisheries and sport fishing tourism have shown to be highly sustainable and often do not negatively impact fish populations if managed correctly.

RELATED READING: Want to know more about catch and release fishing? Then make sure to read this interesting article on the topic as well!

Hence, sport fishing is probably the least of the salmon’s problems!

When it comes to all the other risks and hinders that these fish have to take and overcome, it’s a miracle that salmon still manage to reproduce efficiently enough to keep a healthy population.

Shimano vs. Daiwa Reels (Which Brand Is Better?)
← Previous
White Crappie vs. Black Crappie (How to Identify Them)
Next →