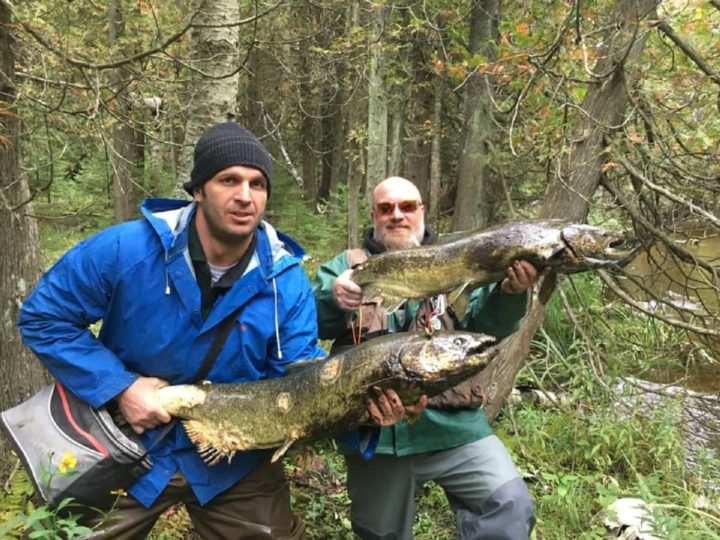 Many people have heard the term zombie salmon, but not many know that this odd term equals one of nature’s most impressive and intelligent designs.

When salmon make their challenging way upstream to reach their spawning grounds, they use up all their energy, and their bodies start to shut down. This process results in fish that are rotting alive, hence the term zombie salmon.

If you want to know more about the somewhat scary topic of zombie fish and why they are so crucial to their natal rivers’ ecosystems, all you have to do is keep reading.

PRO TIP: If you want to read up on North America’s 70 species and subspecies of salmon and trout, make sure to check out this detailed guide on Amazon.

Why Do Salmon Rot Alive?

All five Pacific salmon types start to rot during their migration toward their natal freshwater spawning grounds because their bodies literally begin to shut down and eat themselves up.

This happens because the fish use up all of their bodily energy reserves during their journey upstream to ensure that they will in fact reach their spawning areas.

Especially in larger rivers, such areas are often found high up in the river system, which means that the salmon will have to cover a very long distance to get there. We’re talking anything from a few miles to a few hundred miles.

Just imagine how much energy you would burn through on a journey like this! That’s right; pretty much all of it! And to be frank, chances are you wouldn’t reach your destination at all!

That’s how tough salmon really are! Over time, evolution has made them masters of upstream migration. No river is too long for them, and no current too hard!

They will swim upstream relentlessly until they reach their spawning grounds and ensure that the next generation of salmon will see the light of day.

But this admirable dedication comes at a high price; decay and death!

Using up all of its body’s energy reserves is only half the story, as the salmon also reduces its feeding to an absolute minimum during its journey upriver.

This, of course, drains its energy even faster, speeding up the process of decay with every day that passes.

Furthermore, salmon have got something called immunosuppression, which implies a reduction of the activation or efficiency of the fish’s immune system.

The salmon’s immunosuppression commonly leads to organ deterioration and makes the fish vulnerable to diseases, fungi, and bacteria (in case you had forgotten about the whole rotting alive thing).

This extreme form of reproduction is called semelparity, which simply means death after first reproduction. It’s the ultimate form of sacrifice and a brilliant example of nature’s intelligent designs and adaptive ways of evolution.

RELATED ARTICLE: How Many Miles Is the Longest Salmon Run in the World?

When Do Salmon Start to Rot?

It is often stated that the salmon’s rapid bodily deterioration occurs between the time of breeding and their ultimate death. However, it is often observed that the process starts much earlier than that.

In fact, salmon can start to deteriorate already at the very beginning of their journey upstream. However, most fish will begin to rot alive first after spending a few weeks or months in the river system.

The exact starting point of their bodily deterioration (or senescence) depends on a variety of factors, including:

The last point is especially interesting, as a study has found that predation by bears can influence the senescence of natural salmon populations in rivers.

But no matter when they start to deteriorate, eventually, zombie salmon will decay to the point of no return and seize to exist. It’s part of their highly fascinating cycle of life.

And even if the river they breed and die in is their final destination, the work they do in it is far from over after death!

Why Are Zombie Salmon so Important to the Ecosystem?

Not only are migrating salmon a vital food source for natural predators, such as bears and birds, but their dead bodies also support the river’s food web.

These are yet two other fascinating aspects of the salmon’s life cycle and nature at work!

Bears especially depend on the migrating salmon as they are rich in protein and fat. Every fall, they will return to the rivers to boost their energy reserves for the upcoming winter.

Post-spawn, deceased salmon are as vital to the natural habitat as are live ones. Their decaying bodies contribute to healthier salmon populations and increased salmon returns.

Researchers have found that decomposing salmon carcasses can provide food for up to 137 species of microbes, insects, water invertebrates, birds, and mammals.

As smolt (juvenile salmon) primarily feed on insects and invertebrates during their time in the river, the abundance in food naturally increases their growth rate and body size.

In turn, bigger and well-fed juvenile salmon have a better chance of survival and can return in greater numbers when their spawning time has come.

And with that, the incredible and brilliant cycle of the salmon’s life is concluded!

Now that you have read so much about these zombie salmon, I thought I’d include a few terrifying pictures of them to give you a better visual idea of how scary they can look!

The term is based on today’s popular horror culture, but I think it mirrors the state of these fish reasonably well!

I mean, what better word than “zombie” is there to describe a fish that loses chunks of rotting flesh, has decaying skin with fungus growth on it, and a mouth full of big, sharp, and fang-like looking teeth! Seriously!

But don’t take my word for it. Have a look for yourself:

Are Zombie Salmon Safe to Eat?

Generally, you should avoid eating zombie salmon, as their flesh contains more bacteria and pathogens than that of fresh salmon.

If you do, however, decide to take your zombie catch home with you, here are a few helpful guidelines from the Michigan State University Extensions:

As their bodies are literally decaying alive, zombie salmon, both before and after death, smell pretty badly. The more they deteriorate, the worse the smell gets.

Anglers who have caught live zombie salmon often describe the stench as a combination between spoiled fish and rotten tomatoes, sometimes mixed with a hint of fecal matter as well.

But if you think that’s bad, then you shouldn’t visit a North American riverbank that’s covered with dead zombie salmon because the stench of the rotting dead is even worse than that of the rotting living!

The dead zombies’ foul reek lingers along the riverbanks and, if the wind is wrong, can be smelled from miles away. It’s a genuinely stomach-turning stink that I, for one, can live without!

Suppose it wasn’t for the natural process that guides the salmon’s life cycle. In that case, I’d call this phenomenon “salmon hell on earth”!

Because with all the rotting dead lying and floating around, I’d say that’s an accurate comparison.

RELATED ARTICLE: Landlocked Salmon (Everything You Need to Know)

What Are Zombie Fish in Alaska?

Zombie fish in Alaska are zombie salmon as well. The entire region is well-known and very popular for both its commercial and sport fishing for Pacific salmon, which is why many people wonder what those mysterious zombie fish up in Alaska are all.

The Alaskan commercial salmon fishing industry especially gets a lot of media coverage every year, as the salmon boats catch millions and millions of Pacific-type salmon each year.

RELATED ARTICLE: If you want to find out more about the commercial salmon fishing industry up in Alaska, make sure to read this article as well!

Naturally, some of them will be zombie fish, and journalists are always up for a good story about those.

And as the stories and articles travel through North America and the rest of the world, word about the terrifying zombie salmon gets around.

Steelhead vs. Salmon (How Are They Different?)
← Previous
3 Best Nets for Pike Fishing (All Budgets)
Next →