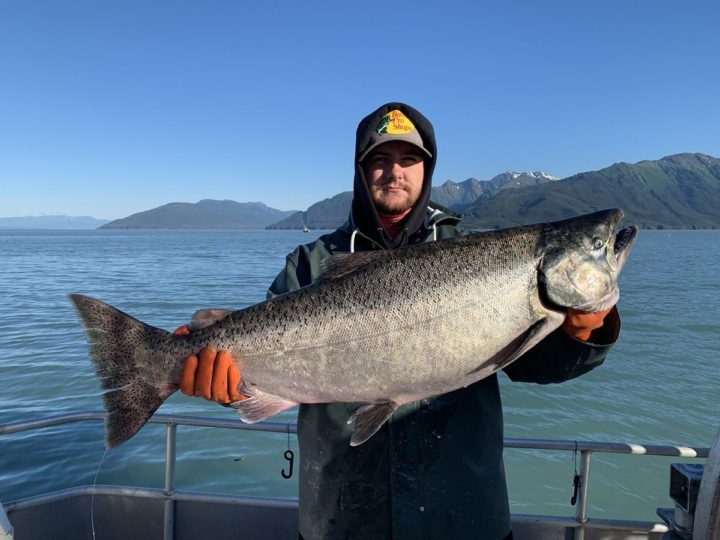 Alaska is one of the world’s largest and most sustainable commercial salmon fisheries. Annually, the region produces hundreds of millions of fish and employs more than 15.000 fishermen. While being both dangerous and demanding, for many fishermen, it’s the job opportunity of a lifetime.

I was lucky enough to find an actual commercial fisherman who has spent several seasons up there fishing for giant wild salmon and ask him about this interesting profession.

The answers I received were both extremely informative and somewhat unexpected.

So, if you are interested in this line of work, or simply want to know everything about commercial salmon fishing in Alaska, this article is perfect for you!

PRO TIP: Check out this in-depth illustrated guide on all of North America’s trout and salmon species and subspecies on Amazon.

How Do You Fish for Alaskan Salmon Commercially?

There are three ways to fish for salmon commercially in Alaska. Each one is tailored to the area a boat is currently operating in and is adapted to the type of fish the boat is targeting.

Gillnetting is a type of fishing where the fisherman will set a net anywhere from 200-300 fathoms. Roughly speaking, this equals a net length of about a quarter of a mile and a net length of 24 feet.

The size of the net’s meshing is set by the Alaska Fish and Game commissioner.

On the water, the fishermen will stretch the net out tight and let it drift with the current, waiting for salmon to swim into it and get tangled up.

Once the captain determines that the net is full, the fishermen will haul the net in and free the fish from it before sorting and transferring them into the ice holds.

Gillnetting is the most common fishing technique that is used to commercially harvest Alaskan salmon. It is mostly used in the wider Bristol Bay area for catching king, coho, chum, and sockeye salmon.

Seining is a technique that requires two boats; one small and one large. The smaller boat pulls the net from the larger boat and into the shape of a large circle.

Both ends of the net are then attached to a crane on the larger boat, which then hoists the net out of the water, trapping all the fish inside.

Finally, the fish are sorted and placed into the ice holds and all bycatch is returned to the water.

Seining is most effective at the beginning of the season when there are large, concentrated amounts of salmon that can be rounded up and caught fairly easily and swiftly.

Both coho, chum, and pink salmon are can be caught seining.

Trolling is typically done in the wintertime and most commonly targets king and coho salmon. Trolling consists of 4-6 rods with lures being pulled behind the boat at a relatively slow speed.

Once a fish is hooked, the fisherman will reel the fish in and determine if it is worth keeping. This technique is used among recreational fishermen as well.

During winter, it has been observed that the big king and soho schools easily spook and shy away from the big nets, which is why commercial boats have adapted a common rod&reel approach to catch them more effectively.

Salmon that are considered “money fish”, such as king, coho, and select Sockeye are gutted and bled as soon as they are caught to preserve their high-quality meat.

Pink and chum salmon are put into the ice holds whole until a tender boat arrives for offloading.

Tender boats will cruise around a fishing fleet and take their fish so that the fishermen do not have to waste time by going back to the harbor when they’ve filled their catch quota.

How Long Is the Commercial Salmon Fishing Season in Alaska?

The length of a salmon season depends on both the region the fish are caught in and the way they are being caught.

Every year, the Alaskan department of fish and game will work together with biologists to track harvest numbers and to determine the total amount of fish that can be caught, as well as the length of the season.

These regulations are strictly enforced and can lead to thousands of dollars in fines for just a few minutes of violation. And it is thanks to these strict regulations that the Alaskan salmon stocks are such a sustainable and renewable resource.

The bulk of the commercial salmon season takes place in the summer months, typically between June 1 and September 15, Sunday through Wednesday, every week.

After the summer, the winter season begins in October and is fished until the quota is met. This tends to be in late November.

It is no accident that the main season coincides with the salmon run, which is the time when adult salmon will leave the ocean to return to their natal rivers for spawning.

RELATED ARTICLE: What Is the Difference Between Steelhead and Salmon?

Where Are the Largest Commercial Salmon Fisheries in Alaska?

Located on the southwestern coast of the state, north of the Aleutian Islands, this is the largest sockeye salmon fishery in the world, accounting for around 50% of the world’s commercial supply of wild sockeye salmon.

It is estimated that around 40 to 50 million wild salmon migrate to the area every year for spawning.

Bristol Bay has long been threatened by the infamous Pebble Mine; a massive copper and gold mine that would destroy a large part of the salmon’s habitat in the area.

Both the commercial fishing industry and Alaska’s native communities have strongly opposed the construction of the mine and in 2014, several protections under the Clean Water Act were put into place to stop the mine from ever being built.

Unfortunately, these protections were withdrawn by the Trump administration in 2019, which means that the threat to Bristol Bay’s salmon populations continues.

Southeast Alaska, Prince William Sound, and Kodiak are the three other major fisheries in the state. These fisheries produce millions of chum and pink salmon every year and are also very productive king salmon fisheries during the winter.

RELATED CONTENT: Get a quick visual summary of this article by checking out the related web story on commercial salmon fishing here!

How Much Does a Commercial Salmon Fisherman in Alaska Make?

Commercial salmon deckhands are paid a percentage of the revenue that the boat brings in. The typical percentage for a fisherman is 15%. More seasoned fishermen that have a wider set of skills are paid 20%-25%. The average salary for a deckhand is hence $20.000 for a 3-month season.

The captain of a boat commonly earns about $60.000 from a successful fishing season. However, maintenance and fuel costs for the boat are included in this salary, which often brings it down to a total of $40.000 to $50.000.

Regardless, both of these salaries seem like a good chunk of change for such a short time, but the grueling 21 hour, cold, rainy, and windy work shifts ensure that the money is hard-earned.

RELATED ARTICLE: Are Salmon Freshwater or Saltwater Fish? (Or Both?)

According to the Alaska Journal, commercial salmon fishing is the most dangerous type of fishery in Alaska.

Between 2000 and 2009, there were 39 deaths related to commercial salmon fishing in Alaska.

The biggest threat when salmon fishing is getting crushed by equipment onboard.

Seining and gillnetting boats have many moving parts which can swing unpredictably during rough conditions.

The crew must always have their head on a swivel when operating this machinery. This is what makes the captain’s job so stressful, as he must watch out for both machinery, waves, and crewmembers risking falling overboard.

What Types of Salmon Are Caught Commercially in Alaska?

All the Pacific salmon types, including king, coho, chum, pink, and sockeye salmon, are being caught commercially in the various fisheries of Alaska.

All of these salmon species are of economic interest with the sockeye being the most economically valuable type of salmon in Alaska.

Which Salmon Species Is the Largest Commercial Harvest in Alaska?

By far, pink salmon is the most commercially harvested salmon species in Alaska.

The pink salmon is the smallest and most abundant of all the Pacific salmon types, and so statewide harvests of over 100 million pink salmon per season are fairly common.

RELATED ARTICLE: Read this article if you want to learn more about all the different salmon species (Atlantic and Pacific)

How Do You Become a Commercial Salmon Fisherman?

In order to work as a commercial salmon fisherman in Alaska, all that’s needed is a high school diploma and a valid fishing license.

There is no formal education that prepares you for this most extreme of professions, which means that you will have to learn everything from the ground when you’re on the boat. Make sure that you’re ready for that!

Harvesting wild salmon for consumption is a safe and sustainable practice that is currently fighting a battle against farm-raised salmon.

The wild salmon’s proven nutritional value is substantially superior to that of farmed salmon and wild salmon have a much lower risk of carrying diseases.

So, before you reach for the less colorful, nutritionally drained farmed salmon that is 4 dollars cheaper, think about the sustainability of the ocean and the hard-working fishermen and women that single-handedly keep an entire industry alive.

The ocean, the Alaskan fishermen, and your health will thank you!