Sauger vs. Saugeye (How to Tell Them Apart) 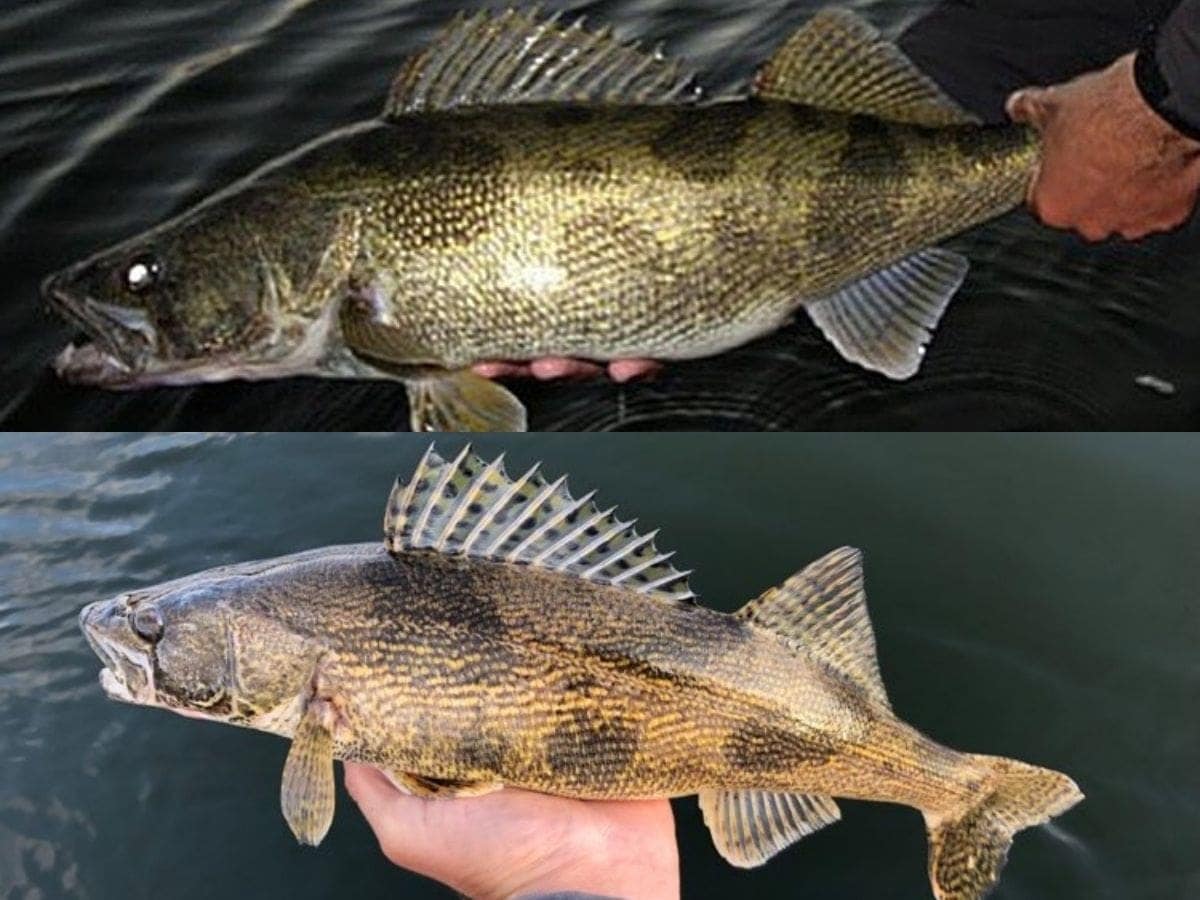 Quite a few anglers have a hard time telling the difference between sauger and saugeye. And who can blame them? Both are very much alike, as they pretty much share the same features and hunting behaviors. Often, they also inhabit the same waters and are caught on the same baits and lures. In order for you to still be able to properly identify them, I have written this article on the interesting topic of sauger vs. saugeye.

Saugeye outgrow sauger by several inches and pounds. While both fish will have dark blotches on their bodies, sauger are generally darker and more tanned than saugeye. Saugeye will also have a white tail patch, which sauger lack completely.

If you want to know all the differences between sauger and saugeye and how you can identify them correctly, just keep reading this article.

What Is the Difference Between Sauger and Saugeye?

Being able to identify your catch is not only of importance when it comes to personal bests or record weights. It’s also crucial for anglers to know whether they’ve caught a sauger or a saugeye (or a walleye, for that matter), as there can be different length and bag limits for the different species in any given body of water.

But knowing the difference between sauger and saugeye is not the easiest of tasks, given that saugeye are the result of crossing a male sauger with a female walleye (hence the name Saug-Eye). This means that they are genetically very close to sauger and hence, the differences between the two fish are more subtle than obvious.

Nonetheless, they are certain unique characteristics that set them apart and that can help anglers identify them better.

For bigger specimens, the easiest way to tell sauger and saugeye apart is by checking their body length and weight. As saugeye take after their walleye parent, they will grow considerably larger than sauger do.

Bigger saugeye will also have a slightly deeper body and a broader back than sauger, which is another characteristic they’ve gotten from their walleye parent.

When it comes to smaller fish, hwoever, you’ll have to look for different characteristics to be able to tell them apart.

Sauger and saugeye have different body colorations, which can help when trying to identify them.

Sauger are commonly of a very dark color that can be either brownish, greyish, blackish, or a mix of these colors. Only their bellies will be of a lighter color that can be yellowish or greyish-white. Additionally, they will have irregularly placed dark or black blotches all over their flanks that can vary in size and shape.

However, it’s important to keep in mind that the saugeye’s coloration may vary quite strongly, depending on how clear or turbid the water you catch them in is. In some water bodies, they might have a very dark coloration and hence bear a close resemblance to sauger.

So if the body color isn’t a sure way of telling them apart, you will have to keep looking for other features.

Now we are getting to the more specific characteristics of the two fish. Telling the difference between sauger and saugeye by inspecting the dorsal fin demands a keen eye, but is a fairly good indicator to look for.

But once again, in order to be able to spot this slight difference, you will have to inspect your catch very closely.

This last characteristic is perhaps the surest way of telling the difference between sauger and saugeye.

Much like walleye, saugeye will have a distinct white patch on the lower fin of their tail. This white area can be as small as a coin or cover half or even the entire lower half of the lower tail fin.

But no matter how big or small the white patch is, if it’s there, you definitely got yourself a saugeye, as sauger completely lack this feature on their tail fin!

RELATED ARTICLE: Make sure to also check out this article on the differences between walleye and sauger

Where Can You Catch Saugeye?

Saugeye can be found in the same waterbodies that hold both sauger and walleye. This is due to both a naturally occurring hybridization between walleye and sauger and to experimental saugeye stockings of many water bodies.

Natural populations can be found as far north as Michigan and as far south as Mississippi in the US, as well as the southern parts of Canada.

A study from 2011 that took samples from the Peoria Pool of the Illinois River found that hybrids make up approximately 4% of the naturally occurring walleye and sauger population, which is a number that can be applied to various other waterbodies in North America.

When it comes to stocking saugeye, this number can of course be much higher. Having plenty of saugeye in a fishery is generally considered popular, mostly due to the fact that saugeye grow faster than walleye and can have a higher tolerance toward warmer and more turbid water.

But fishery managers should stock saugeye with great care, as an increased hybrid population often means decreased walleye and sauger populations due to increased competition with the parental species.

On the other hand, many states have actually stocked saugeye fairly successfully and have hence accomplished very strong and healthy fisheries. Examples of such fisheries can be found in various water bodies in states like:

RELATED ARTICLE: Check out this article if you want to know the difference between rainbow trout and lake trout

How to Fish for Sauger and Saugeye?

As they often occur in the same waterbodies and basically have similar hunting behaviors, you can pretty much use the same methods and baits for both sauger and saugeye. Of course, this also means that you won’t really be able to target one species or the other.

The best way of catching sauger and saugeye is by using jigs on or fairly close to the bottom, which is where you’ll commonly find both of these hunters.

A vertical jig tipped with a small minnow, leech, or nightcrawler 1-2 feet off the bottom can be super effective for sauger and saugeye.

Deep-diving crankbaits and smaller-sized softbaits are also very good choices for these two fish. You can check out a really popular sauger and saugeye crankbait on Amazon here.

What Is the Biggest Sauger Ever Caught?

The All-Tackle world record sauger is a fish of 8lb 12oz that was caught in Lake Sakakawea (North Dakota) on October 6th, 1971. The angler who caught the giant sauger was a man with the apt name of Mike Fischer.

A sauger of almost 9lb is a really big specimen and the question is if this record can ever be broken. Time will tell, I guess!

What Is the Biggest Saugeye Ever Caught?

The world record saugeye is a fish of 12lb 13oz that was caught by angler Fred Sulek in the Clendening Reservoir (Ohio) back in 2001.

However, there also seems to be an unclaimed record fish that weighed even more and was caught somewhere in Montana. That fish supposedly weighed in at an unbelievable 15lb 6oz, but it could also just be a fake. You just never know with unconfirmed sources on the internet.

One thing is for sure though, somewhere out there, a world record saugeye is swimming around, waiting to be caught!

Do Sauger and Saugeye Taste the Same?

Sauger and Saugeye are delicious! Their white and firm meat is considered an absolute delicacy by many and can be prepared in several ways:

If you’ve caught yourself a couple of sauger or saugeye, try deep-frying and serving them with a honey mustard sauce, it’s to die for!

All images courtesy of Chris Kindraka